Leonard Peltier, was convicted of murdering two FBI agents and has been held in maximum security prisons for 46 of the past 47 years. Photograph: Courtesy of Jeffry Scott

The FBI’s repeated opposition to the release of Leonard Peltier is driven by vindictiveness and misplaced loyalties, according to a former senior agent close to the case who is the first agency insider to call for clemency for the Indigenous rights activist who has been held in US maximum security prisons for almost five decades.

Coleen Rowley, a retired FBI special agent whose career included 14 years as legal counsel in the Minneapolis division where she worked with prosecutors and agents directly involved in the Peltier case, has written to Joe Biden making a case for Peltier’s release.

“Retribution seems to have emerged as the primary if not sole reason for continuing what looks from the outside to have become an emotion-driven ‘FBI Family’ vendetta,” said Rowley in the letter sent to the US president in December and shared exclusively with the Guardian.

Rowley added: “The focus of my two cents leading to my joining the call for clemency is based on Peltier’s inordinately long prison sentence and an ever more compelling need for simple mercy due to his advanced age and deteriorating health.

“Enough is enough. Leonard Peltier should now be allowed to go home.”

Peltier, an enrolled member of the Turtle Mountain Chippewa tribe and of Lakota and Dakota descent, was convicted of murdering two FBI agents during a shootout on the Pine Ridge reservation in South Dakota in June 1975. Peltier was a leader of the American Indian Movement (AIM), an Indigenous civil rights movement founded in Minneapolis that was infiltrated and repressed by the FBI.

Rowley refers to the historical context in which the shooting took place as “… the long-standing horribly wrongful oppressive treatment of Indians in the U.S. [which] played a key role in putting both the agents and Peltier in the wrong place at the wrong time”.

The 1977 murder trial – and subsequent parole hearings – were rife with irregularities and due process violations including evidence that the FBI had coerced witnesses, withheld and falsified evidence.

Peltier, now 78, has been held in maximum security prisons for 46 of the past 47 years. He has always denied shooting the agents. Last year, UN experts called for Peltier’s immediate release after concluding that his prolonged imprisonment amounted to arbitrary detention.

In an exclusive interview with the Guardian about her intervention, Rowley, who retired in 2004, said that for years new agents were “indoctrinated” with the FBI’s version of events.

“The facts are murky, and I’m not going to say either narrative is correct. I wasn’t there. But I do know that if you really care about justice, then the real issue now is mercy, truth and reconciliation. To keep this going for almost 50 years really shows the level of vindictiveness the organisation has for Leonard Peltier.

“The bottom line is there are all kinds of problems in the intelligence service which by and large never get corrected for the same reasons: group conformity, pride and an unwillingness to admit mistakes so systemic problems are covered up and never fixed,” said Rowley, a 9/11 whistleblower who testified to the Senate about FBI failures in the terrorist attacks.

Nick Estes, an assistant professor of American Indian studies at the University of Minnesota, said Rowley’s support of Peltier’s clemency was “historic”.

“She is trying to dispel a myth that is deeply embedded into the culture of the FBI … handed down through indoctrinating young recruits such as Rowley about Peltier’s unquestionable guilt and the FBI’s supposed blamelessness during the reign of terror on the Pine Ridge Indian reservation,” said Estes, a volunteer with the International Leonard Peltier Defense Committee.

A gift to Rise Up Times of $25 makes it possible to continue to bring you thoughtful analyses and reflections on current issues as well as events, stories, and opportunities for action.

Rowley wrote to Biden in response to a letter by the intelligence agency’s current director vehemently opposing Peltier’s release on behalf of the “entire FBI family” – which was recently published online by the Society of Former Special Agents of the FBI.

Christopher Wray described Peltier as a “remorseless killer who brutally murdered two of our own – special agents Jack R Coler and Ronald A Williams”. Commutation of Peltier’s sentence would be “shattering to the victims’ loved ones and an affront to the rule of law”, according to Wray’s letter to the justice department’s pardon attorney dated March 2022.

FBI has successfully opposed every clemency application with emotive op-eds, letters and marches on Washington.

But the time served on most murder sentences ranges between 11 and 18 years, while Mark Putnam, the first FBI agent convicted of homicide – for strangling his female informant – was released after serving just 10 years of a 16-year sentence. Peltier was sentenced to two consecutive life sentences, and a parole officer who recommended his release after acknowledging that there was not enough evidence to sustain the conviction, was demoted.

“The disparate nature of Peltier being held for nearly a half century behind bars is striking,” said Rowley, who in the 1990s helped pen an op-ed by the head of the Minneapolis division opposing Peltier’s release. “The facts are everything, not loyalty to the FBI family, not them versus us, not good guys versus bad guys.”

“Rowley speaks with authority and is saying that nothing justifies him being in prison, just vindictiveness, so ignoring her means turning a blind eye to what’s happening,” said Kevin Sharp, Peltier’s attorney who submitted the most recent clemency application 18 months ago. “Rowley knows the case. She knows the FBI and supervised some of those directly involved. She knows Indian Country, so understands the context, which is really important.”

Peltier is currently being held in a maximum security prison in Coleman, Florida, where his health has significantly deteriorated since contracting Covid-19, according to Sharp, who visited in December. Multiple recommendations by the facility to lower Peltier’s classification, so that he can be transferred to a less restrictive prison closer to his family, have been rejected.

“This is a little old man with a walker. It’s not just the FBI that’s vindictive,” added Sharp, a former federal judge appointed by Obama who stepped down from the bench in protest of mandatory minimum sentences. He took on Peltier’s case in 2018 after successfully obtaining a pardon from Donald Trump for a young Black man he had been forced to imprison.

According to Sharp, Peltier’s clemency was still on the table until Trump’s last day in office but didn’t make it on to the final list of presidential pardons which was mostly former associates and white-collar criminals.

He added: “This is not about a 10-minute shootout. It’s about hundreds of years of what had gone before and the decades of what’s gone on afterwards. That’s why Leonard Peltier was convicted, and that’s why he’s still in jail.” 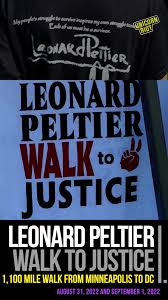 Nearly 2,000 supporters walked the last mile of the walk for Peltier, marching in solidarity from the Washington Monument to the Lincoln Memorial. The AIM song could be heard throughout the rally, along with prayer, drumming, and chanting “Free Peltier!”

Independent media is essential in these Rise Up Times. Your support makes Rise Up Times, Media for Justice and Peace possible. Please donate today.