Through voter amendments and initiatives, citizens can safeguard women’s and civil rights. Pay close attention—Kansas was only the beginning. Demonstrators march past the U.S. Capitol during Women’s March in Washington, D.C., on Oct. 8, 2022., one month before the midterm elections. (Roberto Schmidt / AFP via Getty Images)

Overturning Roe v. Wade in June, the Supreme Court declared that “the authority to regulate abortion is returned to the people and their elected representatives.” But with rampant voter suppression and gerrymandering on the rise—greenlit by the Supreme Court—these “elected representatives” often do not fairly represent the people. This makes ballot initiatives an increasingly important avenue for ensuring women’s rights against the extremism of ruby red legislatures. Just look at Kansas.

On Aug. 2, Kansas primary voters overwhelmingly rejected a proposed constitutional amendment that would have allowed the Republican-dominated state Legislature to severely restrict access to abortion. The amendment was a response to a 2019 state Supreme Court decision in Hodes & Nauser v. Schmidt, which established that the Kansas Bill of Rights includes a right to abortion. The amendment would have overturned this decision and declared that “the constitution of the state of Kansas … does not create or secure a right to abortion.”

Some 59 percent of voters cast ballots against the proposed amendment in an election with a strong turnout—especially among Democrats and Independents—compared to the 2018 midterm primary. This despite the fact that there were no heavily contested Democratic primary races that would have pulled in their votes, and Independents in Kansas are not allowed to vote in partisan candidate races.

In the November elections, there will be five more ballot measures on abortion across the U.S.—the most on record for any single year. 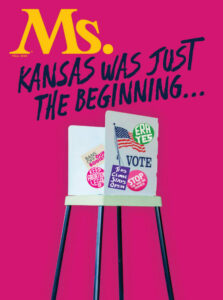 Constitutional Amendment 2 would amend Kentucky’s Bill of Rights to declare that there is no state constitutional right to abortion. Supporters backed the measure to forestall Kentucky courts from making a ruling similar to the Kansas Supreme Court’s Hodes decision.

Protect Kentucky Access is leading the campaign against the amendment. “Healthcare and the right to bodily autonomy are basic human rights,” said Tamarra Wieder, Kentucky state director of Planned Parenthood Advocates of Indiana and Kentucky. “This constitutional amendment puts tens of thousands of Kentuckians’ access to safe, legal abortion at risk, and inserts the government into our individual, personal healthcare decisions. Abortion is healthcare and is a core component of social and economic equality for individuals, their families and their communities.”

Another anti-abortion measure will appear on the midterm ballot in Montana, declaring that “infants born alive at any stage of development are legal persons” and punishing healthcare providers with civil penalties and up to 20 years of jail time if they do not provide medical care. Currently, Montana law requires medical care only if an infant is viable.

By contrast, three states have ballot measures that would add explicit protections for abortion to state constitutions. While courts in nine states have ruled that provisions related to privacy or personal autonomy secure the right to abortion, and other states have guaranteed this right through statute, no state currently provides an explicit constitutional protection for abortion. Voters in Vermont, California and Michigan have the opportunity to change that.

In Vermont, voters will decide on Proposal 5, the Right to Personal Reproductive Autonomy Amendment to the Vermont Constitution, which states that “an individual’s right to personal reproductive autonomy is central to the liberty and dignity to determine one’s own life course.” The amendment would prohibit this constitutional right from being “denied or infringed unless justified by a compelling State interest achieved by the least restrictive means.”

In California, voters will weigh in on Proposition 1, the Right to Reproductive Freedom Amendment, which would revise the California Constitution to forbid the state from interfering with or denying “an individual’s reproductive freedom … which includes their fundamental right to … have an abortion and … contraceptives.”

Advocates in Michigan submitted 753,759 signatures to place a measure on the November ballot that would create a state constitutional right to reproductive freedom, defined as “the right to make and effectuate decisions about all matters relating to pregnancy, including but not limited to prenatal care, childbirth, postpartum care, contraception, sterilization, abortion care, miscarriage management, and infertility care.” The ballot initiative would allow the state to regulate abortion after fetal viability; however, the state could not ban the use of abortion to “protect the life or physical or mental health of the pregnant individual,” as determined by an attending healthcare professional.

In addition to these abortion-related measures, the general election ballot in Nevada includes an Equal Rights Amendment (ERA) that would add language to the Nevada Constitution that “prohibits the denial or abridgment of rights on account of an individual’s race, color, creed, sex, sexual orientation, gender identity or expression, age, disability, ancestry or national origin.” State Sen. Pat Spearman (D), a sponsor of the amendment, said, “We’ve waited long enough for equal rights to be incorporated into our state constitution. … We must be brave in protecting the weak, the downtrodden, the oppressed. We must be brave in lifting our fellow Nevadans to a place of justice and equality.” If the amendment passes, Nevada will become the 27th state to have an ERA in its constitution.

Other noteworthy ballot initiatives include minimum wage amendments in Nevada and Nebraska, a collective bargaining measure in Illinois, a right to healthcare amendment in Oregon, a Medicaid expansion initiative in South Dakota and a New Mexico amendment to direct public money to early childhood programs.

Voters in five states—Alabama, Louisiana, Oregon, Tennessee and Vermont—will decide on ballot measures to repeal language from their state constitutions that allows for enslavement or servitude as punishments for crimes or, in Vermont, for the payment of debts, damages or fines.

If the Kansas primary vote is a sign, these ballot measures could expand women’s rights significantly in a number of key states.