James Baldwin Was Right All Along, by Raoul Peck

The writer and activist has the painful, powerful words for this political moment. America just needs to heed them.

“There are days—this is one of them—when you wonder what your role is in this country and what your future is in it. How, precisely, are you going to reconcile yourself to your situation here and how you are going to communicate to the vast, heedless, unthinking, cruel white majority that you are here. I’m terrified at the moral apathy, the death of the heart, which is happening in my country. These people have deluded themselves for so long that they really don’t think I’m human. And I base this on their conduct, not on what they say. And this means that they have become in themselves moral monsters.”

James Baldwin made this somber observation more than 50 years ago. I included these words in my film I Am Not Your Negro, which explored Baldwin’s searing assessment of American society through the lens of the assassination of three of his friends: Medgar Evers, Martin Luther King Jr., and Malcolm X. It is a film that cruelly shortens time and space between acts of police brutality in Birmingham in 1963 and images of the 2014 protests in Ferguson, Missouri, after the killing of Michael Brown; recent images of protests over the death of George Floyd extend that tragic connection to the present-day.

It took me 10 years to make this film, but Baldwin put his whole life and body weight into these words, which, today more than ever, reverberate like a never-ending nightmare. With them, Baldwin dissected a story whose roots are deep. He exposed the underlying causes of violence in this country, and he would have continued to do so, year after year, one uprising after another, were he still alive today. And we still don’t get it.

Today, as protests against police brutality and institutional racism continue around the country, it is impossible to hide the scars anymore, the ugly facts, the videos, the overwhelming and systemic negation of human life. We can’t breathe! cried all the Black men who have been killed. If they can’t breathe, none of us should breathe, Black or white. These are the terms of the social contract. “It comes as a great shock to discover the country which is your birthplace and to which you owe your life and your identity has not, in its whole system of reality, evolved any place for you,” Baldwin said.

When I Am Not Your Negro came out, I was stunned that it did not cause riots or provoke my banning from the public for being the messenger of such cutting words. The film is based on Baldwin’s 30 pages of notes for a book project called Remember This House, which he ultimately never wrote, because it was too excruciating to do so. In it, Baldwin expressed profound truths about America that had never been said in such a direct and explicit manner:

“I have always been struck, in America, by an emotional poverty so bottomless, and a terror of human life, of human touch, so deep, that virtually no American appears able to achieve any viable, organic connection between his public stance and his private life. …

This failure of the private life has always had the most devastating effect on American public conduct, and on black-white relations. If Americans were not so terrified of their private selves, they would never have become so dependent on what they call “the Negro problem.”

Baldwin’s words are forceful and radical; he punctures the fantasy of white innocence and an infantile attitude toward reality. He understood that there is extraordinary capacity for denial in this country, even when confronted with evidence and logic. His was a deep knowledge of the white psyche, which he thought was marred with immaturity. In this, he unsparingly exposed America’s original sins. First, the genocide of Native Americans: “We’ve made a legend of a massacre,” he said, which is a narrative “designed to reassure us that no crime was committed” and propagated by Hollywood’s “cowboys and Indians” stories. Then, the haunting legacy of slavery: As he said in a famous 1968 interview on The Dick Cavett Show, “I can’t say it’s a Christian nation, that your brothers will never do that to you, because the record is too long and too bloody. That’s all we have done. All your buried corpses now begin to speak.” 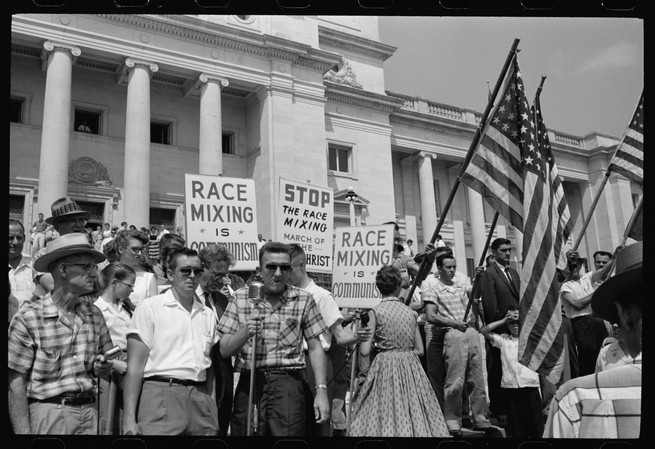 Denial of these sins, he made clear, is a powerful regulatory societal force, as mirrored, for example, in the entertainment industry. He wrote: “The industry is compelled, given the way it is built, to present to the American people a self-perpetuating fantasy of American life. Their concept of entertainment is difficult to distinguish from the use of narcotics. To watch the TV screen for any length of time is to learn some really frightening things about the American sense of reality. We are cruelly trapped between what we would like to be and what we actually are.” Other institutions have similarly erased history.

Why can’t we understand, as Baldwin did and demonstrated throughout his life, that racism is not a sickness, nor a virus, but rather the ugly child of an economic system that produces inequalities and injustice? The history of racism is parallel to the history of capitalism. The law of the market, the battle for profit, the imbalance of power between those who have all and those who have nothing are part of the foundation of this macabre play. He spoke about this not-so-hidden infrastructure again and again: “What one does realize is that when you try to stand up and look the world in the face like you had a right to be here, you have attacked the entire power structure of the Western world.” And more pointedly: “I attest to this: The world is not white; it never was white, cannot be white. White is a metaphor for power, and that is simply a way of describing Chase Manhattan Bank.”

Today, major corporations and leading institutions of entertainment, sports, finance, the press, and academia seem to have discovered for the first time not only how wrong they have been, but also how blind, stubborn, and insensitive. When will Wall Street and the sacred stock market question their role in this? Any serious conversation about systemic racism would have to start there too—maybe even primarily so. And artificial fixes will not do. A complete turnabout is required; a total reframing of rules and practices must take place, and substantial allocation of resources must come with it. The sociologist Kenneth T. Andrews wrote in 2017 about the need to “capitalize on the energy and urgency of the moment … and look to build a movement that generates new sources of cultural, disruptive and organizational power.” Today, a younger generation is in the streets. As Baldwin reminds us, we forget how young the actors of his time were.

The playwright Lorraine Hansberry was 33 years old when she attended a now-famous meeting in May 1963 between then–Attorney General Robert F. Kennedy and a group of artists and activists. Baldwin had arranged the gathering in hopes of inciting the president, the attorney general’s brother, to engage in a meaningful, symbolic gesture: escorting a Black student who was scheduled to enter a toxic, segregated school in the South. Stupefied by Bobby Kennedy’s dubiousness, Hansberry charged: “I am very worried about the state of the civilization which produced that photograph of the white cop standing on that Negro woman’s neck in Birmingham.” And then she left the room. She died a year and a half later.

If any lesson can be drawn from this meeting, it is that we’ve always known that people were subjugated, even murdered in such a way. Men, women, children. None of that is new. And this has been known at the highest level of this country.

And when Baldwin rhetorically asked himself almost 60 years ago, “What can we do?,” his answer was devastating: “Well, I am tired … I don’t know how it will come about, but I know that no matter how it comes about, it will be bloody; it will be hard.”

Baldwin has been right this whole time. There is nothing to add or to subtract. It’s up to you now to act upon it.

Raoul Peck is a filmmaker and a producer. His film I Am Not Your Negro was nominated for an Oscar in 2017.

← Resisting Drone Terror: Behind the Scenes of Shut Down Creech!
Edward Snowden and Julian Assange’s warning about the Security and Surveillance Industrial Complex →