Measured not against its past but against its contemporaries, American democracy in the twenty-first century is withering.

By Jill Lepore  The New Yorker  January 27, 2020
The Future of Democracy is an exploration of democracy in America.  View the series

The last time democracy nearly died all over the world and almost all at once, Americans argued about it, and then they tried to fix it. “The future of democracy is topic number one in the animated discussion going on all over America,” a contributor to the New York Times wrote in 1937. “In the Legislatures, over the radio, at the luncheon table, in the drawing rooms, at meetings of forums and in all kinds of groups of citizens everywhere, people are talking about the democratic way of life.” People bickered and people hollered, and they also made rules. “You are a liar!” one guy shouted from the audience during a political debate heard on the radio by ten million Americans, from Missoula to Tallahassee. “Now, now, we don’t allow that,” the moderator said, calmly, and asked him to leave.

In the nineteen-thirties, you could count on the Yankees winning the World Series, dust storms plaguing the prairies, evangelicals preaching on the radio, Franklin Delano Roosevelt residing in the White House, people lining up for blocks to get scraps of food, and democracies dying, from the Andes to the Urals and the Alps.

In 1917, Woodrow Wilson’s Administration had promised that winning the Great War would “make the world safe for democracy.” The peace carved nearly a dozen new states out of the former Russian, Ottoman, and Austrian empires. The number of democracies in the world rose; the spread of liberal-democratic governance began to appear inevitable. But this was no more than a reverie. Infant democracies grew, toddled, wobbled, and fell: Hungary, Albania, Poland, Lithuania, Yugoslavia. In older states, too, the desperate masses turned to authoritarianism. Benito Mussolini marched on Rome in 1922. It had taken a century and a half for European monarchs who ruled by divine right and brute force to be replaced by constitutional democracies and the rule of law. Now Fascism and Communism toppled these governments in a matter of months, even before the stock-market crash of 1929 and the misery that ensued.

“Epitaphs for democracy are the fashion of the day,” the soon-to-be Supreme Court Justice Felix Frankfurter wrote, dismally, in 1930. The annus horribilis that followed differed from every other year in the history of the world, according to the British historian Arnold Toynbee: “In 1931, men and women all over the world were seriously contemplating and frankly discussing the possibility that the Western system of Society might break down and cease to work.” When Japan invaded Manchuria, the League of Nations condemned the annexation, to no avail. “The liberal state is destined to perish,” Mussolini predicted in 1932. “All the political experiments of our day are anti-liberal.” By 1933, the year Adolf Hitler came to power, the American political commentator Walter Lippmann was telling an audience of students at Berkeley that “the old relationships among the great masses of the people of the earth have disappeared.” What next? More epitaphs: Greece, Romania, Estonia, and Latvia. Authoritarians multiplied in Portugal, Uruguay, Spain. Japan invaded Shanghai. Mussolini invaded Ethiopia. “The present century is the century of authority,” he declared, “a century of the Right, a Fascist century.” 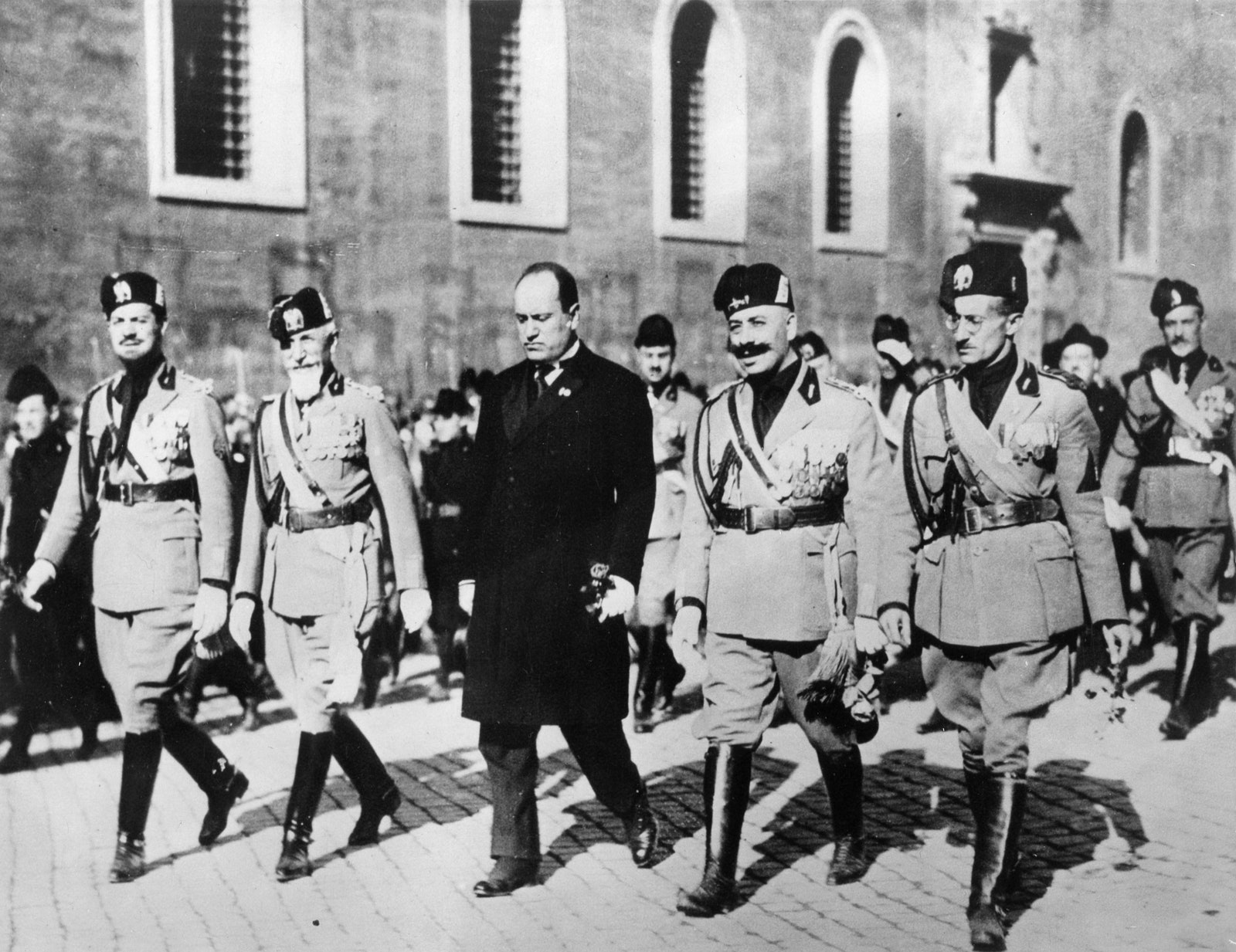 In 1922, Benito Mussolini (center) marched on Rome. A decade later, he declared, “The liberal state is destined to perish.”  Photograph from Getty

American democracy, too, staggered, weakened by corruption, monopoly, apathy, inequality, political violence, hucksterism, racial injustice, unemployment, even starvation. “We do not distrust the future of essential democracy,” F.D.R. said in his first Inaugural Address, telling Americans that the only thing they had to fear was fear itself. But there was more to be afraid of, including Americans’ own declining faith in self-government. “What Does Democracy Mean?” NBC radio asked listeners. “Do we Negroes believe in democracy?” W. E. B. Du Bois asked the readers of his newspaper column. Could it happen here? Sinclair Lewis asked in 1935. Americans suffered, and hungered, and wondered. The historian Charles Beard, in the inevitable essay on “The Future of Democracy in the United States,” predicted that American democracy would endure, if only because “there is in America, no Rome, no Berlin to march on.” Some Americans turned to Communism. Some turned to Fascism. And a lot of people, worried about whether American democracy could survive past the end of the decade, strove to save it.

“It’s not too late,” Jimmy Stewart pleaded with Congress, rasping, exhausted, in “Mr. Smith Goes to Washington,” in 1939. “Great principles don’t get lost once they come to light.” It wasn’t too late. It’s still not too late.

There’s a kind of likeness you see in family photographs, generation after generation. The same ears, the same funny nose. Sometimes now looks a lot like then. Still, it can be hard to tell whether the likeness is more than skin deep.

In the nineteen-nineties, with the end of the Cold War, democracies grew more plentiful, much as they had after the end of the First World War. As ever, the infant-mortality rate for democracies was high: baby democracies tend to die in their cradles. Starting in about 2005, the number of democracies around the world began to fall, as it had in the nineteen-thirties. Authoritarians rose to power: Vladimir Putin in Russia, Recep Tayyip Erdoğan in Turkey, Viktor Orbán in Hungary, Jarosław Kaczyński in Poland, Rodrigo Duterte in the Philippines, Jair Bolsonaro in Brazil, and Donald J. Trump in the United States.

“American democracy,” as a matter of history, is democracy with an asterisk, the symbol A-Rod’s name would need if he were ever inducted into the Hall of Fame. Not until the 1964 Civil Rights Act and the 1965 Voting Rights Act can the United States be said to have met the basic conditions for political equality requisite in a democracy. All the same, measured not against its past but against its contemporaries, American democracy in the twenty-first century is withering.

The Democracy Index rates a hundred and sixty-seven countries, every year, on a scale that ranges from “full democracy” to “authoritarian regime.” In 2006, the U.S. was a “full democracy,” the seventeenth most democratic nation in the world. In 2016, the index for the first time rated the United States a “flawed democracy,” and since then American democracy has gotten only more flawed. True, the United States still doesn’t have a Rome or a Berlin to march on. That hasn’t saved the nation from misinformation, tribalization, domestic terrorism, human-rights abuses, political intolerance, social-media mob rule, white nationalism, a criminal President, the nobbling of Congress, a corrupt Presidential Administration, assaults on the press, crippling polarization, the undermining of elections, and an epistemological chaos that is the only air that totalitarianism can breathe.

Nothing so sharpens one’s appreciation for democracy as bearing witness to its demolition. Mussolini called Italy and Germany “the greatest and soundest democracies which exist in the world today,” and Hitler liked to say that, with Nazi Germany, he had achieved a “beautiful democracy,” prompting the American political columnist Dorothy Thompson to remark of the Fascist state, “If it is going to call itself democratic we had better find another word for what we have and what we want.” In the nineteen-thirties, Americans didn’t find another word. But they did work to decide what they wanted, and to imagine and to build it. Thompson, who had been a foreign correspondent in Germany and Austria and had interviewed the Führer, said, in a column that reached eight million readers, “Be sure you know what you prepare to defend.”

It’s a paradox of democracy that the best way to defend it is to attack it, to ask more of it, by way of criticism, protest, and dissent.

American democracy in the nineteen-thirties had plenty of critics, left and right, from Mexican-Americans who objected to a brutal regime of forced deportations to businessmen who believed the New Deal to be unconstitutional. W. E. B. Du Bois predicted that, unless the United States met its obligations to the dignity and equality of all its citizens and ended its enthrallment to corporations, American democracy would fail: “If it is going to use this power to force the world into color prejudice and race antagonism; if it is going to use it to manufacture millionaires, increase the rule of wealth, and break down democratic government everywhere; if it is going increasingly to stand for reaction, fascism, white supremacy and imperialism; if it is going to promote war and not peace; then America will go the way of the Roman Empire.”

The historian Mary Ritter Beard warned that American democracy would make no headway against its “ruthless enemies—war, fascism, ignorance, poverty, scarcity, unemployment, sadistic criminality, racial persecution, man’s lust for power and woman’s miserable trailing in the shadow of his frightful ways”—unless Americans could imagine a future democracy in which women would no longer be barred from positions of leadership: “If we will not so envisage our future, no Bill of Rights, man’s or woman’s, is worth the paper on which it is printed.”

If the United States hasn’t gone the way of the Roman Empire and the Bill of Rights is still worth more than the paper on which it’s printed, that’s because so many people have been, ever since, fighting the fights Du Bois and Ritter Beard fought. There have been wins and losses. The fight goes on.

The Future of Democracy

UBSCRIBE AND DONATE TO RISE UP TIMES

Donate
By Rise Up TimesPublished On: July 14th, 20212 Comments