Federal authorities have sought to extradite Assange, saying he is not a journalist, but his family says the indictment is an attack on freedom of the press.

Included is a video of the talk and because the Roger Waters and Dan Ellsberg introductions were not successfully shown at the event, a separate video is included below. 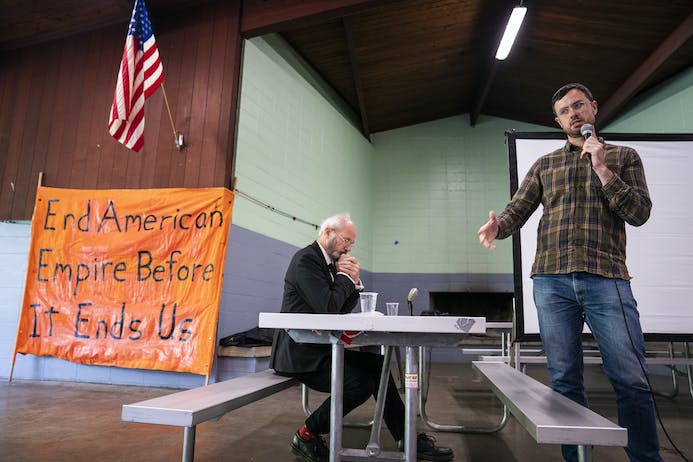 John and Gabriel Shipton (on the right), the father and brother of WikiLeaks founder Julian Assange, spoke in St. Paul on the Home Run Tour for Julian. LEILA NAVIDI •  leila.navidi@startribune.com

Background Information: John and Gabriel Shipton, the father and brother of WikiLeaks founder Julian Assange, held a speaking event at the Highland Park Pavilion on Monday, June 21, 2021. The St. Paul event, sponsored by Women Against Military Madness, was part of a cross country U.S. tour by Assange’s family to advocate for his release and for the Biden administration to drop its extradition effort. More information at assangedefense.org.

The brother of WikiLeaks founder Julian Assange, wanted in the United States for allegedly publishing military and diplomatic secrets, said Monday that people must know what their government is doing “if democracy is to work.”Gabriel Shipton and Assange’s father, John Shipton, spoke Monday at a St. Paul forum sponsored by Women Against Military Madness. It was part of a monthlong 17-city tour of the United States they’re making to argue that the 17-count federal indictment against their son and brother is an attack on freedom of the press.

“Reporting truth is not a crime,” John Shipton said.

Assange has been imprisoned in Great Britain for more than two years as American officials attempt to extradite him for allegedly violating the 1917 Espionage Act in obtaining and publishing classified military and diplomatic documents in 2010.

John Shipton noted that the documents Assange disclosed included revelations about alleged U.S. atrocities during the Iraq and Afghanistan wars that turned the Iraqi government against the continued presence of U.S. military forces there.

The leaks, allegedly provided by former U.S. soldier and intelligence analyst Chelsea Manning, had a positive impact on U.S. foreign policy and helped lead to the release of wrongfully held Afghan prisoners in Guantanamo, Shipton said. 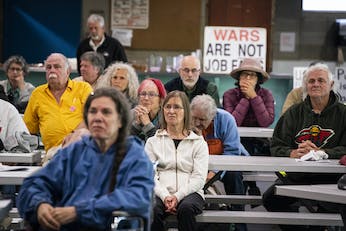 The audience listened during a speaking event held by John and Gabriel Shipton, the father and brother of WikiLeaks founder Julian Assange, at the Highland Park Pavilion in St. Paul. ] LEILA NAVIDI • leila.navidi@startribune.com

It was widely reported that the Obama administration considered indicting Assange for the 2010 leaks but decided against it.

“The problem the department has always had in investigating Julian Assange is there is no way to prosecute him for publishing information with the same theory being applied to journalists,” Mathew Miller, a former Justice Department spokesperson, told the Washington Post in 2013.

But the Justice Department under the Trump administration decided otherwise.

“No responsible actor, journalist or otherwise, would purposely publish the names of individuals he or she knew to be confidential human sources in a war zone, exposing them to the gravest of dangers,” Demers said.

John and Gabriel Shipton, who are from Melbourne, Australia, urged those attending Monday’s forum to ask members of Congress to have the Justice Department reconsider its prosecution of Assange.

A British judge in January rejected the U.S. effort to extradite Assange, saying it would subject him to harsh conditions in U.S. jails and possibly cause him to commit suicide, given his mental condition.

On January 19, the last full day of the Trump administration, the Justice Department appealed the British ruling and followed in February with a brief in support of the appeal. John Shipton said the appeal was filed before Merrick Garland became Attorney General, and that he hoped Garland would allow the charges to “fade away.”

The prosecution of Assange has been widely condemned by media groups and First Amendment organizations. A coalition that includes the American Civil Liberties Union, Amnesty International and Human Rights Watch has urged the Justice Department to drop its efforts to extradite Assange and dismiss the charges. The editors of The New York Times, Washington Post, USA Today and Wall Street Journal have been critical of Assange’s indictment.

Coleen Rowley, a retired FBI agent from Minneapolis who has visited Assange several times, introduced the Shiptons at Monday’s forum. She compared the WikiLeaks documents to the 1971 release of the Pentagon Papers that exposed U.S. misdeeds during the Vietnam War, and said it was wrong to charge Assange under the same law used to imprison opponents of World War I.

“We are at a precarious moment,” she said.

Click to view the ‘Home Run Tour for Julian.’
Coleen Rowley opens the event at about 11:15 on the view slider on this video on Facebook.

From Rise Up Times:
To understand what would happen if Assange were to be extradited to the US for trial, Rise Up Times recommends listening to John Kiriakou in this video:

← Analysis: ‘White America can keep kicking Derek Chauvin,’ but what does it mean for systemic change?
Less-Lethal Weapons: Violence to Silence Justice, by Jasmine McBride        →