The trouble with Fredrick-Miller Spring is that its wonderful water is threatened by continuing development. The newest controversy is a plan to cut down 455 “heritage” (not replaceable) trees and to build 50 upscale homes on 28 acres just above the place where water is collected.

Since 1890 Eden Prairie property owners have worked to “maintain the spring and keep it open to the public.” Fredrick-Miller Spring is now the only easy access real water in Hennepin County.

Eden Prairie City Council plans to vote on rezoning 28-acres of wooded “rural” land above the Fredrick-Miller Spring access to “residential.” The open hearing is on Tuesday, May 4. Anyone may speak; consider preparing a 2-minute speech.

Spring supporters plan to gather at 6:30 pm in the city building at 8080 Mitchell Road. The meeting starts at 7 pm.

FFI including maps and photos:
www.fredrickmillerspringfriends.org

The Only Accessible Spring Water in the County

The Fredrick Miller-Spring is the only easy access major spring water source in all of Hennepin County, population 1.26-plus-million. Hennepin is the most populous county in the state where one out of five Minnesotans live. 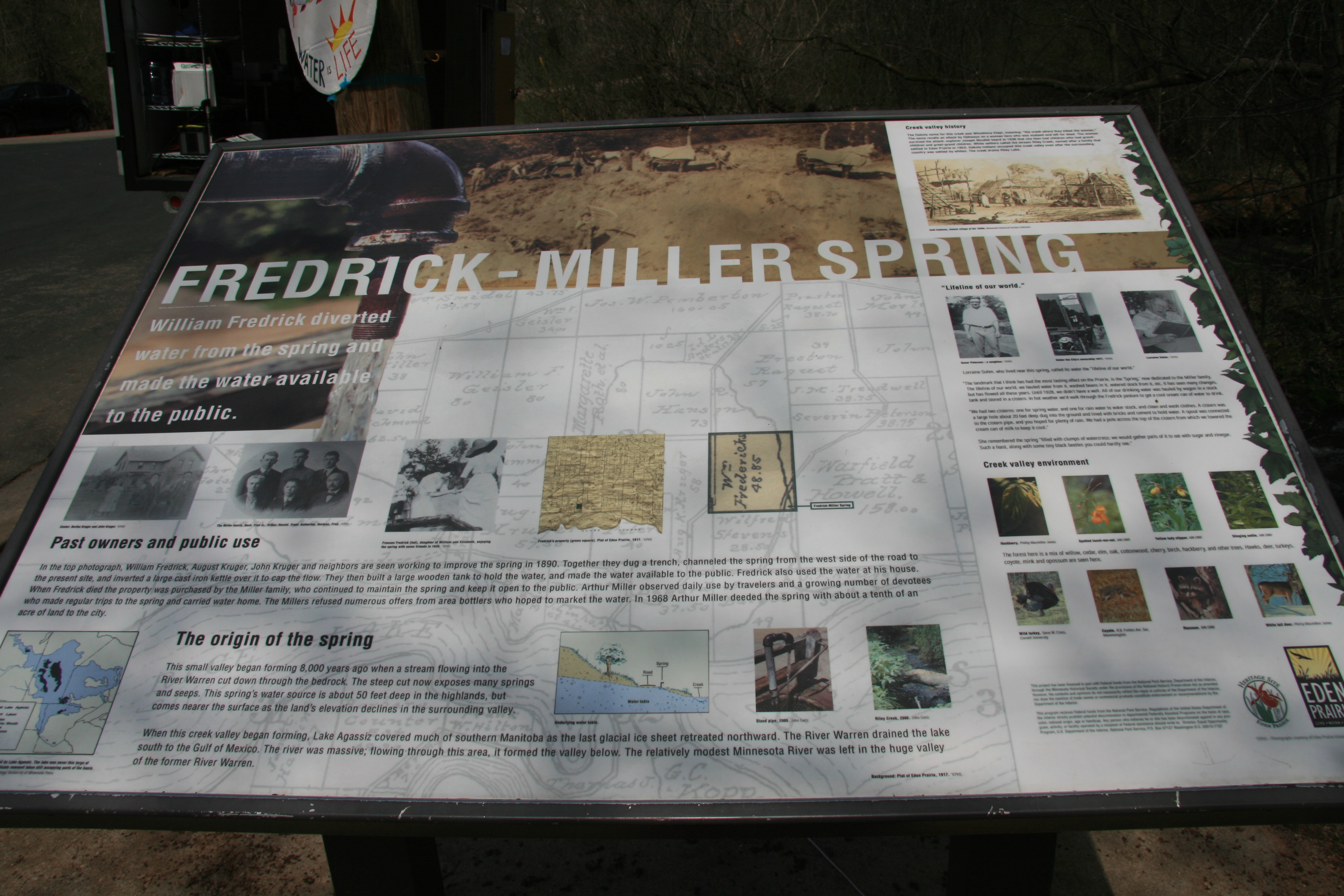 The trouble with Fredrick-Miller Spring is that its wonderful water is threatened by continuing development. The newest controversy is a plan to cut down 455 “heritage” (not replaceable) trees and to build 50 upscale homes on 28 acres just above the place where water is collected.

Think of a narrow V-shaped valley. Fredrick-Miller Spring water originates on the west side of the V, uphill. It is piped down and under Spring Road to the east side beside Riley Creek. The spring water runs with force 24/7, and empties into Riley Creek. The hillside is steep and subject to erosion into the already “impaired” creek that no longer holds trout.

If 50 new homes are built wear and tear on Spring Road will require rebuilding the old, curvy road. The small access area where water can be collected is only 1/10th of an acre. Increased traffic would be a safety problem for water collectors who arrive and depart day and night.

This unstable land is currently zoned rural. Developers have been lobbying local politicians to rezone it to “residential.” Eden Prairie city officials would love the growth in property tax revenues that 50 new homes would bring.

The home construction firm, PulteGroup based out of Atlanta, builds in 23 states with a consumer rating of 1.5 stars out of 5 stars which gives a hint about their quality control. Additionally there are stories of corporate anti-union actions. With reported construction short cuts and worker issues, concerns about water protection barely register.

The Minnesota River bluff called Purgatory Ridge out of which Fredrick-Miller Spring streams reportedly contains a number of Indian mounds. When European Christians came to Minnesota anything Native Americans called “sacred” was given a pejorative new name like Devil’s Tower in Wyoming.

In the State Named for Water

Here we are in the state named for water, mi-ni is Dakota for water, as in Mni Wiconi, “water is life” (pronounced mi-ni wa-cho-ni) the rallying cry from the Standing Rock, Dakota Access Pipeline (DAPL) tar sands resistance.

The Dakota name for the Fredrick-Miller Spring is Wi-no-hin-c[h]a k’te-pi meaning “the creek where they killed the woman.” According to an old on-site plaque: Ojibwes attacked a Dakota woman, scalped her and left her for dead. Joseph Nicollet heard the story about her in 1838. She lived, had three children, grandchildren and great grandchildren.

In 1853 the creek was called Riley Creek [it empties Riley Lake on its way to the Minnesota River].

In 1968 the Miller family deeded the spring and 1/10th of an acre to Eden Prairie. 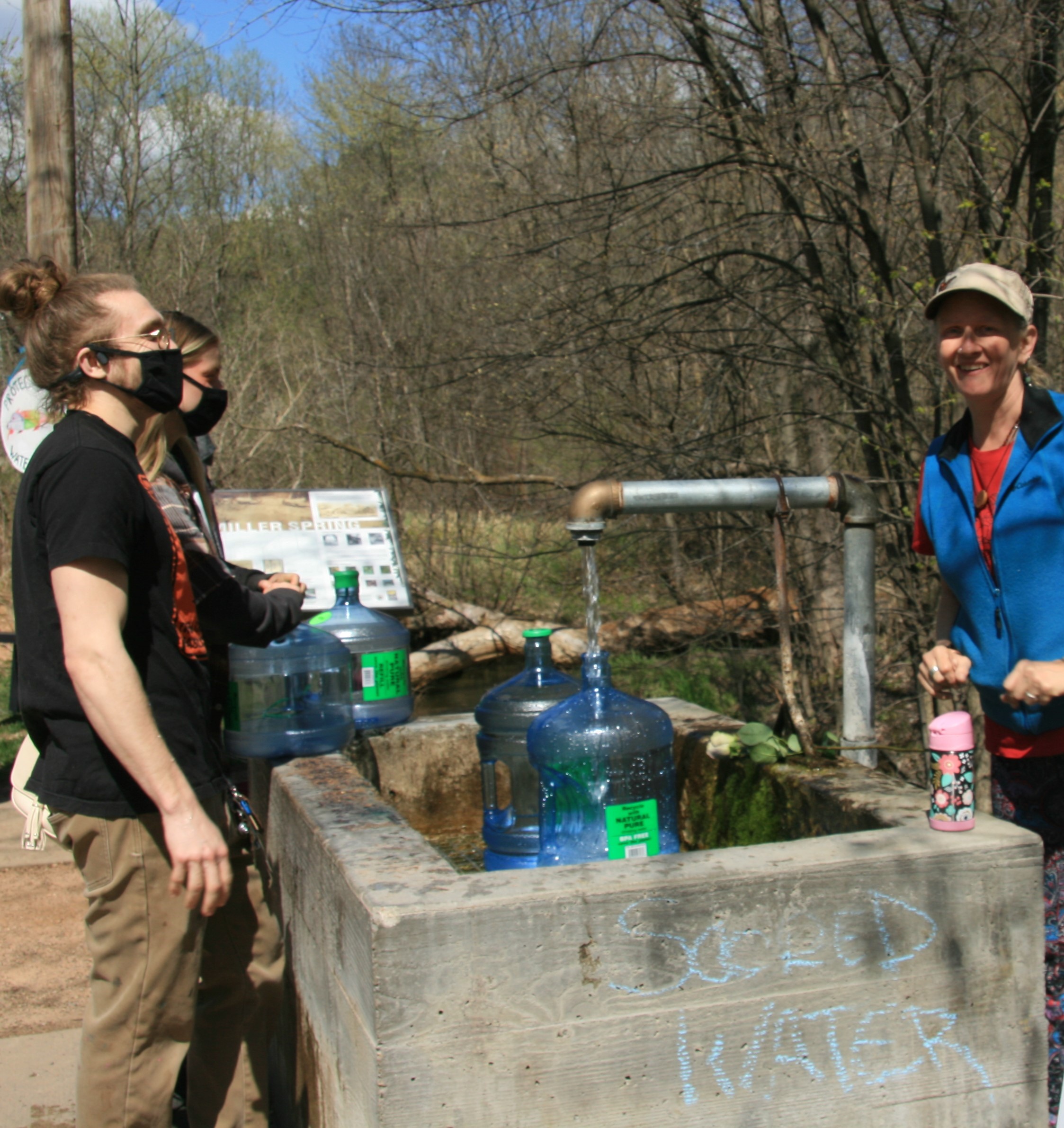 At Fredrick-Miller people drive-in and line up with multitudinous containers at the Spring Road pullout. People who come here for their good water are from all over the greater Twin Cities, people who want real water that tastes good, people from Hennepin, Ramsey and Scott counties, from Rochester and Iowa, rural people with bad well water—they wait in friendly lines for their turn at the ever-flowing spigot. There is one man who drives down from northern Minnesota to escape the iron-tasting water for 55,000 gallons to top-off his home cistern!

What About the Other Big Springs?

The United Nations recognizes access to water as a human right however the U.S. Constitution does not.

In such a water-blessed area as Mi-ni-apolis Mi-ni-s[h]ota we should expect superior and abundant water. The Great Medicine Spring and Glenwood Spring were both permanently dewatered in the 1980s with construction of Interstate-394 west out of Minneapolis. Their flow is syphoned off at a rate of 2.5-mllion gallons per day (gpd) into highway ponds and Bassett’s Creek, then piped into the Mississippi by the Stone Arch Bridge.

Coldwater Springs which furnished water to Fort Snelling from 1820-1920 has been reduced by “development” from 130,000 gallons per day (in 1999) down to its current rate of 66,240 gpd. Furthermore there is no easy access down into the concrete Spring House and it’s a 10 minute uphill walk back to parking. Coldwater is the last natural spring in Hennepin County, “natural” because the groundwater flows directly out of limestone bedrock.

Only the Fredrick-Miller is left for free access to real water. Of course there’s chemically treated Mississippi River water for most homes in our area but what about people whose wells aren’t up to standard? The United Nations recognizes access to water as a human right however the U.S. Constitution does not. 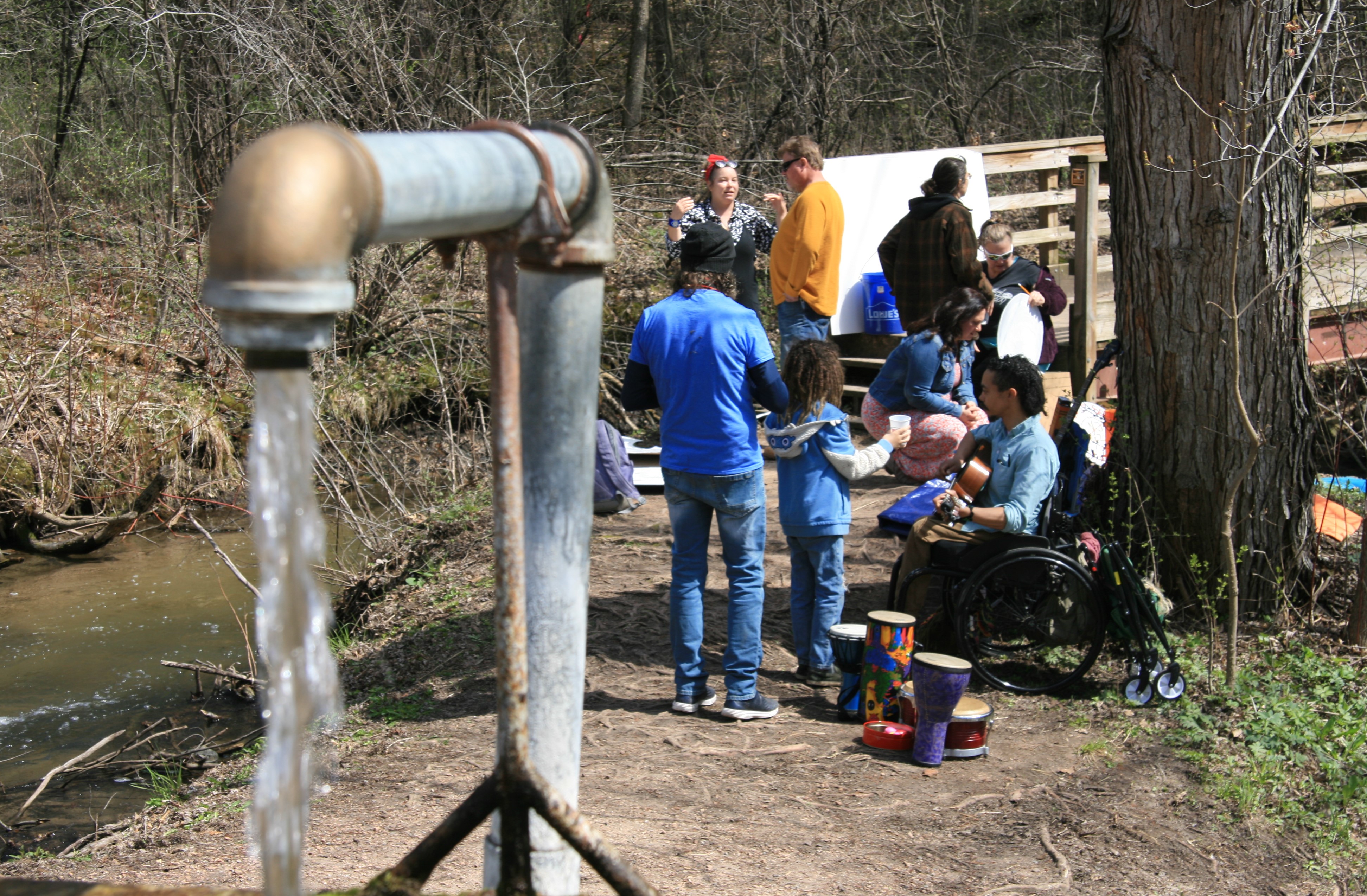 Riley Creek has experienced a noticeable decrease of fish and plant life according to water protector Friends of Fredrick-Miller Spring. The Spring’s generosity rushes down Purgatory Ridge and is arguably the last fast-flowing, easy access, good-tasting major spring water in the Mississippi watershed of southern Minnesota.

Since Native people lived in the Minnesota Valley for thousands of years, the ridge above the Spring is likely topped with Native American mounds, particularly because the name of the ridge was heathen-ized to “Purgatory.”  Culturally this land would be acknowledged as sacred. Dakota people consider burial sites and all spring water to be sacred.

FFI including maps and photos: www.fredrickmillerspringfriends.org

Donate
By Rise Up TimesPublished On: April 26th, 20212 Comments