“Well, if music could only bring peace, I’d only be a musician,” sang Pete Seeger in his 1967 song “Letter to Eve.” In an essay in a forthcoming University Press of Kentucky re-issue of the classic book Clods of Southern Earth, folksinger Si Kahn raises a related question: “Can Poetry Change the World?”

Clods of Southern Earth, by the poet Don West, was first published in 1946 by a small and now defunct leftwing New York press called Boni and Gaer. It sold more than 14,000 copies in its first year, making it a bestseller among volumes of poetry. West, an organizer and activist, co-founded the Highlander Folk School with Myles Horton in 1932 after both had visited and studied a series of Danish folk schools in Europe.

Highlander was originally tied to labor organizing but eventually became known as a training ground for civil rights organizers in the 1950s and 1960s. Rosa Parks attended a workshop there before refusing to relinquish her seat on a Montgomery, Alabama, bus, and it was there that the song “We Shall Overcome” became a part of the movement.

“The songs were important. But songs alone, poetry alone, any of the arts alone, they don’t change the world. That takes organizing and direct action.”

“A lot of people say, oh, music can change the world,” says Kahn in a recent interview, during which we chat about his work and my tattered copy of West’s classic. But, he continues, “only if it’s accompanied by direct action organizing. People say, ‘Well, look at the civil rights movement. All those songs, didn’t they make a difference?’ I say, yes, of course they did. They sustained the people who made the movement. The songs were important. But songs alone, poetry alone, any of the arts alone, they don’t change the world. That takes organizing and direct action.”

This principle is central to how Si Kahn lives his life. In addition to a career as an award-winning touring folksinger, he has spent the past fifty years as a labor and community organizer, mostly in the South. He has authored four books (three on organizing) and co-authored a fifth on privatization with his partner and spouse, Elizabeth Minnich. More than 300 of his songs have been recorded. He has also written the script and/or songs for seven musicals.

Or, as the German anti-fascist poet and playwright Bertolt Brecht put it, “Art is not a mirror held up to reality but a hammer with which to shape it.”

Today, art is being used both to cope with and respond to the political reality of Donald Trump in the White House. Shortly after the January 2017 Women’s Marches in Washington, D.C., and more than 900 other cities around the nation and world, I sat down with Pat Humphries and Sandy Opatow, who collectively form the musical duo “Emma’s Revolution.” (The name is inspired by the famous quote from the anarchist activist and writer Emma Goldman: “If I can’t dance, I don’t want to be in your revolution.”)

“We’ve been writing songs about progressive issues all along,” Humphries explained, “but the irony is that when somebody really despicable gets into office, we get many more people coming to our concerts. We hear from a lot of people that our music really helps stave off that sense of alienation. People kind of clamor for a sense of community and a sense of hope.”

And a sense of objective reality.

Nowadays, said Opatow, “We’re in a position of needing to deliver the facts through the songs, since facts are now up for grabs. Like the song we wrote where we and the audience get to yell, ‘Donald Trump, You’re Fired!’ We’re including in that song the fact that he lost by three million votes—that needs to be remembered—and that the Electoral College is an issue and a problem, [along with] voter suppression and the voter ID laws.”

But, Opatow noted, the song was originally written back in the Bush Administration, after the U.S. Supreme Court delivered the presidency to George W. Bush. It was about “why can’t they count our votes.”

Kahn, too, finds that many of his songs have come back around again. His song “Government on Horseback” was written in the 1980s at the time of Ronald Reagan’s presidency, but lines like “The President stepped off the silver screen / He said, ‘People put your lives here in my hands / We can turn our country’s honor white again / And let the sulfur smoke of progress fill our land,’ ” make it all too familiar for today’s audiences. A new video version, referencing Trump, was even recently released for bluegrass audiences.

Political artists are often accused of “just preaching to the choir,” but, as Kahn explains, “if you focus only on the really dominantly unconverted, and you don’t pay attention to your base, you lose your base. Let’s talk about the last presidential election, right? You have to pay attention to your base, so they stay active, so they stay informed, in some cases so they stay militant, so they feel like you’re taking care of them. We need to preach to the converted because that is where change will come from.”

But, as Opatow noted, “I think that the Women’s Marches across the country and around the world show that the choir is a lot bigger than anyone knew. Or maybe many of us knew it in our hearts but we never got to see it.” People come together in different ways, at different times. “The choir,” she said, “really depends on how closely people are feeling the threat, or the discomfort, or the upset, or the anger. And certainly Trump and his administration have pushed that over the edge.” 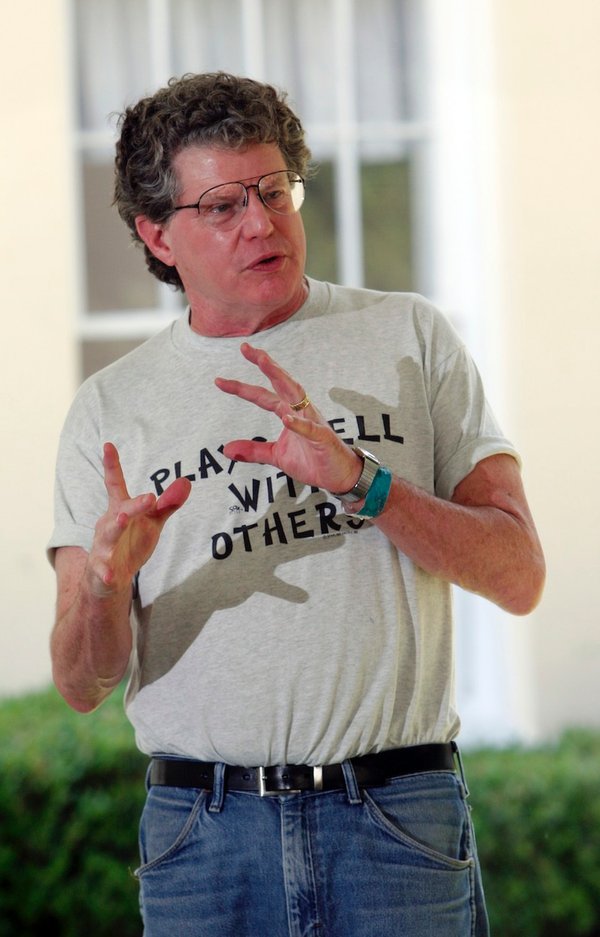 Today, Kahn is working more and more with musical theater, which he says “has been such a powerful tool, especially in the labor movement.” His most recent work, “Mother Jones in Heaven,” is the story of labor organizer Mary Harris “Mother” Jones. Actors Vivian Nesbitt and John Dillon are now touring the country with the show.

“They sold their house, they sold their assets, they bought an RV, and they’re traveling the country bringing Mother Jones back where she’s needed,” Kahn says. In mid-October, the actors joined the picket line with striking auto workers in Detroit, Michigan.

And while such efforts do not in themselves win strikes, they do provide needed moral support to strikers. “They’ve been out a long time, this is a tough one,” Kahn says of the strikers. “It could go for one hell of a long time. So, yeah, it’ll sustain the people. And that’s where I think as an artist, you recognize that.” (The forty-day-long strike was resolved about a week after we spoke, on terms favorable to the union.)

“The artist must take sides,” legendary artist and activist Paul Robeson once said. “He must elect to fight for freedom or slavery. I have made my choice. I had no alternative.”

But taking sides, Kahn stresses, does not mean seeking to alienate audiences that might disagree with you. “I think you have to start by trying to do your best to meet people with something that you do have in common and then just moving them a little bit,” he says.

Humphries agrees: “What we find is that people will unite around the issues they can unite around. . . because we speak and sing about so many different issues. We almost always run into some situations where people aren’t entirely comfortable with some of our songs. They’re very comfortable with others. And we invite the discussion. And sometimes it is our job to comfort the afflicted and afflict the comfortable and stir up things a little bit so that people are just a little bit off-balance and can maybe consider some things that they haven’t considered in the past.”

Kahn perhaps put it best in a 2011 speech at the Folk Alliance gathering in Memphis, Tennessee: “To be political as an artist means to lift up a vision of a better and more just world . . . . through our work, the political is made into art. Particular issues may come and go. But the art we create, individually and together, will persist, and will continue to move people, both into action and into a deeper place of consciousness and hope.”

Donate
By Rise Up TimesPublished On: October 25th, 20201 Comment