An interview with Leona Morgan by Mary Beaudoin for the WAMM Newsletter, August 7, 2020

The nuclear industry and government agencies downplay the true horrors of the nuclear issues with what we activists call “nukespeak,” meaning that they separate the full cycle of issues around nuclear power and nuclear weapons. But examination of the Nuclear Fuel Chain connects the two faces of nuclear — bombs and electric power — and reveals the links from mining to labs and manufacturing plants to transportation and waste storage. And from there it gets into the environment and inside our bodies. The Nuclear Fuel Chain also lays bare nuclear colonialism and for-profit nuclear industry.

While every year in August, Americans of conscience commemorate the horrific days when the U.S. dropped a uranium bomb on the Japanese city of Hiroshima and a plutonium bomb on Nagasaki, July 16, 1945 is a very unique and quite tragic day for us in New Mexico.

We must not forget that New Mexico was the first place to experience a nuclear weapon. This year is also the 75th anniversary of the first atomic test that took place on Mescalero and Chiricahua Apache lands. [Editor’s note: That was the Trinity Test. Trinity was the code name for a part of the Manhattan Project that resulted in dropping the bombs on Japan.]

The uranium to create the bomb dropped on Hiroshima came from the Shinkolobwe Mine in the Democratic Republic of Congo (DRC), where the most potent uranium was found. The Manhattan Project contracted with a Belgian company that owned the mine. The uranium was brought to the U.S. and refined at Oak Ridge, Tennessee, and then sent to the Los Alamos National Laboratories in New Mexico, where it was used in the research and development of the bomb called Little Boy that was dropped on Hiroshima.

There are many weapons facilities in New Mexico and uranium continues to be experimented with. The University of New Mexico maintains a research facility.

Hanford in Washington State is the site of the world’s first nuclear reactor and it is where the uranium from the Shinkolobwe Mine was processed into plutonium fuel for the bomb called Fat Man that was dropped on Nagasaki.

The Congolese miners handled radioactive uranium without being provided with any knowledge about what it was. Their families and the entire village of Shinkolobwe were destroyed by radioactive contamination. Generations of children were born with malformations. An organization, the Congolese Civil Society of South Africa, and the Missing Link Conference connect Shinkolobwe survivors to Hiroshima and Nagasaki.

Shinkolobwe mine, the origin of uranium used in the Manhattan Project to build the bomb dropped on Hiroshima. Congolese workers were not informed by that they were dealing with radioactive material. Photo: National Geographic

The legacy of the Shinkolobwe Mine is felt all over the world from DRC communities to those living near nuclear dumps across the U.S. to downwinders from the first test in New Mexico and U.S. weapons dropped on Japan. There is a common thread among these people: a desire for recognition and justice for what was suffered as a result of the U.S. government program to build an atomic bomb.

There are many weapons facilities in New Mexico and uranium continues to be experimented with. The University of New Mexico maintains a research facility. 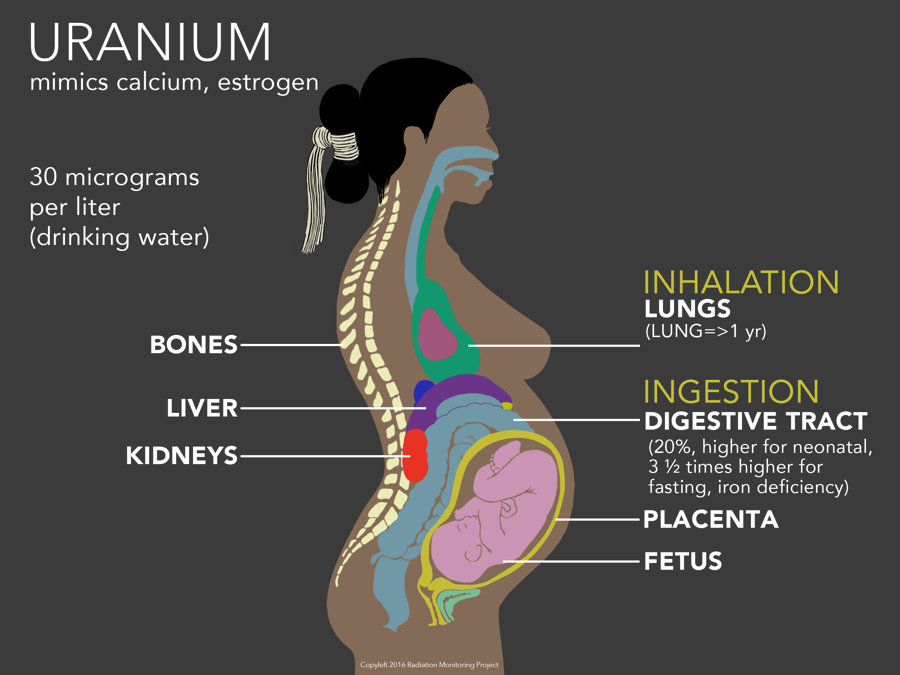 Radioactive uranium enters the body by inhalation or ingestion causing health impacts on organs. It mimics calcium and possibly, estrogen. Image & report: “The uranium map in our bodies,” beyondnuclearinternational.org

Uranium waste is an issue. We do not want to turn into a wasteland and a sacrifice zone. Remarkably, in 1979, on July 16, the same day as the Trinity Test detonated the first atomic bomb, the world’s largest uranium spill occurred on Diné (Navajo) homelands in the northwest part of New Mexico. It released over 100,000 million gallons of radioactive waste that flowed into Arizona. The contamination is still carried by wind, dust, trucks, trains, and animals. In Washington state, waste from processes still threatens the Columbia River and has defied clean-up efforts.

Sandia National Labs is a weapons arsenal, southeast of Albuquerque, and maintains a huge waste area called a “mixed waste landfill.” It’s basically a big hole in the ground where nuclear and other waste is dumped. It is less than one mile from water wells and above the Albuquerque aquifer, six miles from downtown Albuquerque. The site is being expanded (with a new storage shaft), but there isn’t transparency about it. It’s claimed that the dump is “interim” only, but there is no permanent storage site anywhere.

Right now my focus is on Holtec, a massive company which proposes to more than double high level radioactive waste near Albuquerque, bringing it from other locations. Other states have nuclear power reactors which generate waste. I would like to see other communities, especially along the railroad lines, request hearings about the safety of transporting nuclear waste to the Holtec facility. People can demand that their states hold Nuclear Regulatory Commission hearings. This concerns everyone.

Leona Morgan is an Indigenous community organizer and activist who co-founded and coordinates with the Nuclear Issues Study Group. She works in international, multiracial, woman-led movements to dismantle the nuclear beast. Leona is from the Navajo Nation and lives in Albuquerque, New Mexico.

Stop the extremely dangerous out-of-state transportation of nuclear waste. The private companies, Holtec International and Waste Control Specialists (WCS)/Interim Storage Partners (ISP), have each applied for a license to transport all of the waste from every nuclear power plant in the country to dump on New Mexico and Texas. The Nuclear Regulatory Commission (NRC) has released a Draft Environmental Impact Statement (DEIS) for both proposals.

“We Are Not a Wasteland”: Nuclear Studies Group six-part video series, including issues of environmental racism and justice, to educate and inspire resistance to the largest proposed high-level radioactive waste dump on earth. facebook.com/NuclearIssuesStudyGroup/videos

Donate
By Rise Up TimesPublished On: October 9th, 20201 Comment