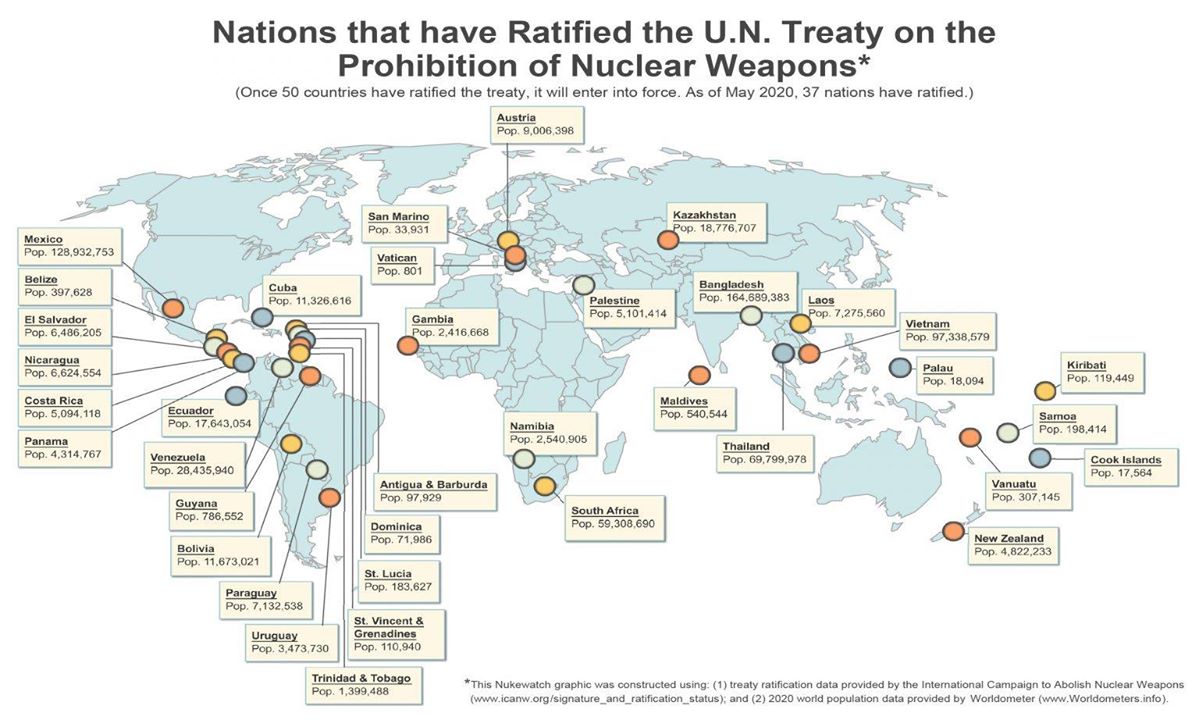 By Steve McKeown  Original to Rise Up Times  Nukewatch Summer 2020

This coming August the National Veterans for Peace (VFP) Convention was to be held in Albuquerque, New Mexico, to commemorate the 75th anniversary of the dropping of atomic bombs on Hiroshima and Nagasaki, and the Trinity bomb test in New Mexi­co. The theme of the convention was to be “Human Rights over Nuclear Might.” A demonstration was planned for the nuclear weapons lab in nearby Los Alamos.

Veterans for Peace set sail for Japan last year in their sailboat, the Golden Rule, to be present for the 75th anniversary. The Golden Rule is the same boat that a group of Quakers tried to sail to the Marshall Islands in the Pacific Ocean to protest US nuclear testing in 1958. However, the Coast Guard inter­vened, and the crew spent 60 days in jail. Several years ago VFP obtained the boat, restored it, and began sailing up and down the West Coast to draw support and educate for nuclear abolition.
This May, Nukewatch, Nuclear Resister, and the Oak Ridge Environmental Peace Alliance were planning on hosting a large conference in Maryville, Tennessee to strategize for nuclear abolition and to promote the United Nations (UN) Treaty on the Prohibition of Nuclear Weapons.
By March, the End War Committee consisting of our local chapter of VFP and Women Against Military Madness (WAMM) had collected 23,000 signatures on paper petitions calling on Minnesota’s congressional delegation to support the UN Treaty on the Prohibition of Nuclear Weapons (TPNW) from all of the 851 incorporated towns and cities in Minnesota. The End War Committee was beginning to make appointments with elected officials to deliv­er the petitions and ask for their commitment.
Then came the coronavirus pandemic, and despite President Trump’s claims—cases would “go back to zero by April,” it was “under control,” and would “go away like a miracle”— the virus continued its devastating march across the country. It has affected all aspects of life, including plans that many peace people had for nuclear disarmament education, and garnering support for the UN Treaty.
The VFP National Convention was changed and will be conducted on-line with no demonstration at Los Alamos. The Golden Rule made it to Hawaii, but is not going on to Japan this year. The nuclear disarma­ment conference in Tennessee was canceled. Our End War Committee had to halt its signature collecting and postpone making appointments with legislators.

However, the VFP Convention has been scheduled to take place in Albuquerque in 2021. The Golden Rule did sail around the Hawaiian Islands making many stops before the pandemic, taking 9th graders on a ride, and being welcomed by the Honolulu city council, which adopted a resolution in support of the UN Treaty Ban. No doubt the Golden Rule will sail again. Our End War Committee will make appointments soon, and we are promoting phone calls to lawmakers, the media, and our community. As Nukewatch has said, “Our work goes on unabated.”
These are examples of only a few of the hundreds of organizations that are working to support the UN Treaty Ban. On May 19, Belize ratified the Treaty. This means 37 nations have now ratified, and it only needs 13 more to reach the 50 necessary to enter into force and become international law, thus stigmatizing the nine nuclear-armed nations: the US, Russia, China, France, the UK, Israel, Pakistan, India, and North Korea.
In this time of COVID-19, demonstrations for nuclear abolition are hard to pull off. Nukewatch’s regular readers don’t need to be reminded of the Doomsday Clock being set at 90 seconds to midnight to continue working for nuclear disarmament. The political aspect should not be ignored, even though the will is certainly not there on the part of “the powers that be”— which is all the more compelling a reason to be engaged with any and all of our public officials. One step to take would be to call your US Senators to support the UN Treaty. This is a simple yet necessary step as they are the ones who would ratify the Treaty. I was collecting signatures at a talk given by a UN of­ficial in St. Paul, and one of Minnesota Senator Tina Smith’s aides signed the petition and gave me her card without my soliciting it to set up a meeting. We have since met with her, and we were well received.
Lastly, when we went around the whole state of Minnesota to county fairs, American Legions, VFWs, church suppers, schools, trailer courts, and most every imaginable business, and even taking our VFP Peace Bus on the road, you can be sure the conversation didn’t stop there. It is not an exaggeration to say that over 100,000 people discussed the issue of nuclear disarmament one way or another. Most people like the idea of a treaty for all countries, and each one of us needs to continue the multiplier effect of shining the light on this critical issue so our politicians won’t have to stay in the dark any longer.
Steve McKeown is co-founder of the Minneap­olis/St. Paul Veterans for Peace, Chapter 27. He traveled the entire state of Minnesota for two years obtaining signatures on the petition urging the US to ratify the UN Treaty on the Prohibition of Nuclear Weapons.
+++

Donate
By Rise Up TimesPublished On: August 19th, 20206 Comments