Until the killing of Black men—Black Mother’s Sons—becomes as important to the rest of the country as the killing of a white mother’s son—we who believe in freedom cannot rest until this happens.    —Ella Baker

The headline from The Guardian reads, “Hundreds demand justice in Minneapolis after the police killing of George Floyd on May 26, 2020,” as Minneapolis made international news about an incident of police murder in South Minneapolis: Not the best way to make international news, to say the least. They got one thing very wrong: There were thousands, not hundreds of people who took to the streets in peaceful protest demanding Justice after the murder of George Floyd. National media has been making comparisons to the choke-hold death of Eric Garner in New York City in July of 2014.

The day of the demonstration (May 26, 2020) I deliberately took the route home from a doctor appointment to go by what I had seen earlier, a Black Lives Matter sign surrounded by flowers, thinking I would drive by and give support. As I drove north on Chicago Avenue I could see the cars parked along the way for blocks and an increasing number of people with signs like “I can’t breathe” and Justice for George. As other cars turned off Chicago as the traffic started to stack up, I stayed, waiting in traffic until I got up to the intersection of 39th St. and Chicago, which was blocked, and behind it was a full block full of people. I could not see the whole demonstration, but assumed (as it turned out correctly) that blocks around 38th and Chicago Ave. where George Floyd was put in a choke-hold by Minneapolis police and consequently died, were as full of protesters as the area I was in.

As I turned and then drove north on Park Avenue toward Lake Street, at 38th  and Park about 30 or more protesters held signs. At the corner of Lake and Chicago, a huge banner called the police murderers. The four officers involved were fired the day after the incident. If Floyd had been white, they would have just arrested him. It looks like for once the police were held accountable, but firing is not enough for their brutality. I am ashamed of the Minneapolis police, but proud of my fellow Minneapolitans to see so many outraged and turning out for the peaceful protest.

Shortly after I left the area, hundreds of protesters marched to the 3rd Precinct police offices on Lake Street and Minnehaha Avenues, assumed to be the home office of the four officers. As Jeff Wagner on CBSN Minnesota (WCCO) reported,, out of the several hundred who marched to the precinct offices, only a few started to throw rocks and water bottles and broke windows. The police at the 3rd precinct retaliated in force with tear gas and rubber bullets and flash bangs that make noise and smoke. According to the account in The Guardian written by eye witness Jared Goyette, he saw and overheard this:

One of the officers in riot gear walked down the line of police chanting something close to “take the precinct back,” as if he were trying to pump them up. They repeated it, like a call and response.

Jeff Wagner on CBSN Minnesota (WCCO) interviewed a demonstrator who said, “It’s ugly. The police have to understand you know. This is the climate they have created,” rightly putting responsibility for “inciting people to riot” in large part where it belongs, on police violence. That is not to excuse the young men who threw water bottles and rocks, but as soon as there is violence the press grabs ahold of it and blames the victims, although in this case most of the coverage I saw was sympathetic, and if not support for the property damaging protesters, at least did not condemn them. Young men in all cultures are young warriors; it is written on the DNA. We saw it at Standing Rock as well. And on the streets during Occupy. But they have consistently drawn the line at taking human life, limiting their “violence” to property damage.

Jeff Wager also interviewed Trey Pollard, one of the organizers of the peaceful protest centering at 38th and Chicago where Floyd was killed. He said that the violence on the part of the protesters at the precinct office was the result of the anger and spillover of what people were feeling but that this was not the right platform to express that anger. And that it was not how the protest was intended to end.

As I write this the day after the protest, Minneapolis is still reeling, from the officials at the mayor’s office, to the police, to the outraged citizens that this happened in our town.

We have had other deaths of Black men at the hands of the police and white people in the Twin Cities metropolitan area as well. But this apparently deliberate murder pushed people to a breaking point.

I can’t help but think of Jackson Browne’s There Are Lives in the Balance, a song about war in faraway lands, but parts of it apply as well to the war in our own country, our very own city:

On the radio talk shows and TV
You hear one thing again and again
How the USA stands for freedom
And we come to the aid of a friend
But who are the ones that we call our friends?
These governments killing their own?
Or the people who finally can’t take anymore
And they pick up a gun or a brick or a stone

It is not enough to have justice as a sword used against people of color, it must also be a shield.   —Maya Wiley

Last night into the wee early hours I watched the area at Lake and Minnehaha burn on Unicorn Riot while protesters still roamed the streets. For those not familiar with the area, it is where the 3rd Precinct police offices are. It is also a major business and shopping area, including independently owned restaurants, a liquor stores, an auto store  a Minneapolis library, a US Bank, a pawn shop, a Target in a shopping mall with other small businesses, and two major grocery stores, Aldi’s and Cub. Many of these businesses were either burned or looted last night. A friend tells me the looting has continued into today. The police have not attempted to stop it.

This is an area I not only often drive through; that is “my Target” when I go to a Target, a library I use, and make occasional trips to the Cub. I feel as if I am in a war zone between Lake and Minnehaha and 38th St. and Chicago Ave where Floyd was killed. I am not directly affected, but I am close enough that I could hear and see the helicopters out my window last night, although I could not see the flames. It is like being close to the front in a war zone where I can hear the bombs but I am not directly affected. And it is upsetting, to say the least, to see a familiar place burn and be looted, even online.

Last night (or rather very early this morning) Unicorn Riot was interviewing people. One young woman was walking in the middle of the street chanting “I can’t breathe” over and over at the top of her lungs. When interviewed, she said that this was supposed to be a peaceful protest, that this is not the way to get justice: “We are destroying the community we live in,” she said. And for many who were there that was true. But also many came from North Minneapolis as well, which is quite a distance from South Minneapolis but is a community where many Blacks live. One young Black man once told me not so many years ago it is like a war zone to live there.

Another woman who spoke into the Unicorn mike said she lived in the community near Lake and Minnehaha. She said, “We are fighting for our lives right now!” She did not just say it; it was an exhortation. It sums up what the anger is about. Their very lives are threatened in ways that I honestly can only tenuously grasp. The immediate threat is from the police. But the murder of George Floyd flipped a trigger that let loose anger of years of oppression.

The looters and those setting fires and creating a lot of property damage are not helping. A lot of people are just going to look at the looting and fires and say, “See, see what terrible and violent people they are” and condemn them. Yet their anger and actions are those of rebellion, still drawing a line at bloody revolution. Needless to say, our current “president” feeds the hate and fear. We are, as Henry Giroux says, a country at war with itself.

Over 50 years ago in July of 1967 the Northside was the site of similar fires, destruction, and looting. And in November of 2015 Black Lives Matter occupied the area outside the 4th Precinct in North Minneapolis after Jamar Clark was shot by two Minneapolis policemen. Outsiders came in and shot five people. In early December the police moved in and disbanded the encampment.  There have been other murders of Black men in the Twin Cities, most notably Philandro Castile in a St. Paul suburb.

The question they are asking is, When will it end? When will the Minneapolis police be stopped from their persecution of people of color? And beyond that, when will the oppression of Black people and other people of color end in the United States. I know of a story told me by a young Native American man about a Native American thrown into a trunk by the Minneapolis police. That was some years ago, but the persecution is not limited to the Black community, although it is certainly very prevalent, as the article cited below, “Picking Up the Pieces: A Minneapolis Case Study,” documents.

I want to offer hope, and perhaps the best hope is in these words of Paul Wellstone, as a Minneapolis community speaks, if not exactly as one, certainly united in our plea for justice and for social change. 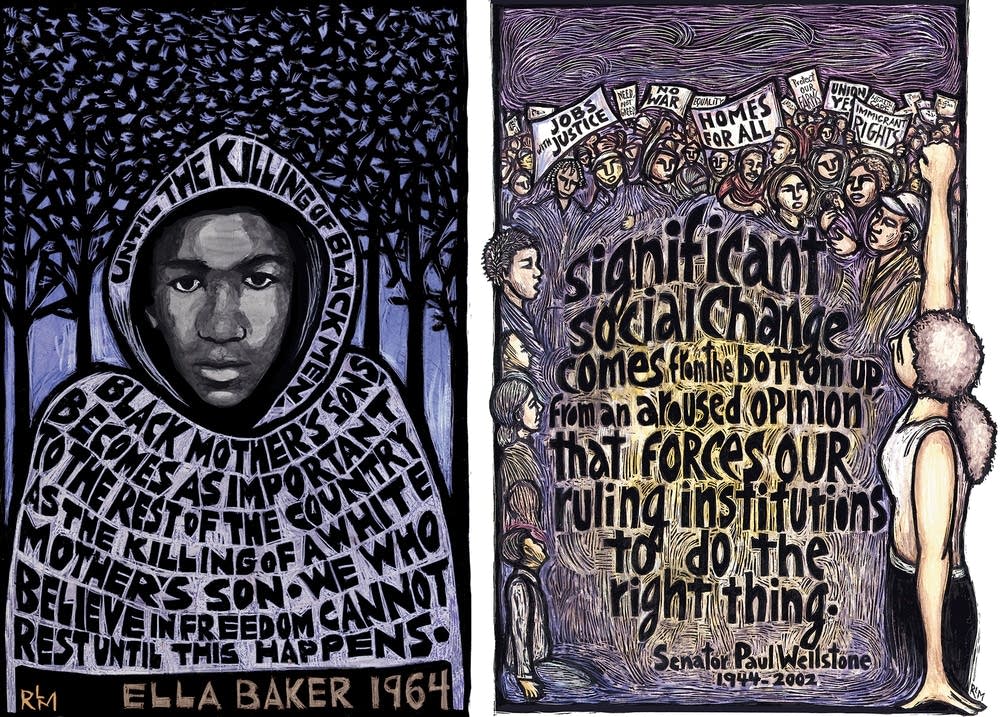 Picking Up the Pieces: A Minneapolis Case Study
+++

Donate
By Rise Up TimesPublished On: May 28th, 2020Comments Off on The Murder of George Floyd