Several articles from the Spring 2020 WAMM Newsletter in response to the pandemic are included here, covering foreign policy, support for health workers, a Brigid McDonald poem, and more.

Call for a New Feminist Foreign Policy to
Confront the Pandemic 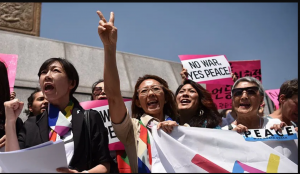 WAMM joins Women Cross the DMZ (Demilitarized Zone separating North and South Korea) in calling for a feminist foreign policy to confront the coronavirus pandemic with the following actions:

1.     Reallocate Pentagon spending towards meeting human needs as outlined by the People’s Bailout (peoplesbailout.org), including healthcare and paid sick and family leave for all, halting of evictions and foreclosures, and honoring treaty obligations to Indigenous Peoples.

Life in the Time of Quarantine
By Brigid McDonald

Oh what a disgusting scene—
all the world on quarantine.

Safe distance is six feet
when walking down the street.

Friends can’t stop and hug—
they might catch the bug.

In your home you must stay
and disinfectant you must spray.

No place for coffee break or brunch
and don’t you dare go out to lunch.

We’ll wash our hands and spray door knobs
and many folks will lose their jobs.

No one will even hire us
because of this bad virus.

The streets are very quiet.
Good time to start a diet.

It makes our world seem very small,
but glad for phones so we can call.

Even to church no one goes
for how long no one knows.

We’re all as careful as can be
but why this catastrophe?

Are some folks profiting today
while others suffer along the way?

With a handy wipe and a face mask,
we hope to take those bugs to task.

Though far apart in this endeavor,
we’ll all stay home and be “together.”

Brigid McDonald is a long-time activist with Women Against Military Madness, and belongs to the Sisters of St. Joseph Carondelet headquartered in St. Paul, Minnesota.
+++

Beware the Other Contagious Diseases! Build Our Immunity!
Call for a Ceasefire!

We have grasped the mystery of the atom and rejected the Sermon on the Mount. The world has achieved brilliance without wisdom, power without conscience. Ours is a world of nuclear giants and ethical infants. We know more about war than we know about peace, more about killing than we know about living.

When a soldier trained to kill, reminds us that peace should be our purpose, why can we not reject violence?

Colleagues tell me there is another pandemic more raging and deadly than even the COVID-19 coronavirus! No vaccine is yet in sight for this horrible contagion which spread its infection in some 70 countries. Caused by blinding exceptionalism and militarism, over the years it has killed millions of people, caused debilitating health problems in millions more, and forced even more to flee their homes. It has destroyed or destabilized governments throughout the world and drained resources from productive sectors of the economy. And yet the US-NATO-Israel’s politicians and mass media glorify this other pandemic. Can the CDC name the non-novel but more horrible contagion?!

Tell them they just need to change one letter from SARS (to get WARS).

As someone who has studied propaganda for fifteen years, I have never seen it so prevalent and so dangerous at a time when we are distracted by a viral disease.  Having allowed the propaganda virus to spread and go undetected for such a long time, we’ve lost all ability to recognize it….

For decades, we have been victims of propaganda to the point that we are no longer aware of it.  In spite of it, we have not managed to build an immunity to the lies.  Quite the opposite — we have become more vulnerable as our resistance erodes with every shot of propaganda.  But we are not broken – not yet.  It can only affect us if left undetected.

Like COVID-19, the propaganda virus goes undetected until it’s tested for and discovered.  We must therefore learn to test for, detect, and reject it.  We can do this by refusing to abandon our critical thinking.  Pleasant or not, we cannot allow our underlying bias guide us and instead we can use commonsense. Don’t let the propaganda virus infect you — it is deadlier than you can imagine. Full article at ttinyurl.com/u7n9h44

UN Secretary Antonio Guetterres called for an immediate global ceasefire to respond to COVID19. As the dominant military power in the world, the U.S. should lead the way. We also call for an end to the draconian economic sanctions that the U.S. imposed on Venezuela, Iran, Cuba, North Korea, Zimbabwe, and other countries around the world. Sanctionskill.org
+++

We know that war costs a lot of money so it shouldn’t surprise us that the cost has been carefully examined and a project has been devoted to studying it. The Cost of War project is devoted to just this. Located in the Watson Institute for International and Public Affairs at Brown University, the project website publishes user-friendly analysis, data, figures, charts, news articles, academic papers, and details revealing economic, social, and political aspects focused on the United States 9/11 and post-9/11 wars.

The project’s directors are three women, Neta C. Crawford, Catherine Lutz, and Stephanie Savell, all of whom have impressive careers that include studying militarism, war and its effects. The credentials of those on the Board of the project are also impressive.

One of the goals of the project is to shed light on all deaths caused by war, Afghani, Iraqi, and Pakistani civilian deaths, as well as those of contractors, journalists, and combatants.

As for the economic costs, according to the Cost of War project, “through Fiscal Year 2020, the United States has spent or obligated $6.4 trillion dollars on wars in Afghanistan, Pakistan, and Iraq.” The project includes a comprehensive analysis of long-term U.S. healthcare expenditures for veterans’ care and disabilities, in addition to spending for the Pentagon, the Department of Homeland Security, and foreign assistance.

The section on the social and political costs of war contains fascinating material on the impact of war on human rights, the environment, objectivity, and the media.

The material is too extensive to include in this newsletter but, if you can, now would be a good time to take a long look at the Cost of War website: watson.brown.edu/costsofwar. If you don’t have access to electronics, you might ask a friend or relative if they will look at the site for you and share some of the information with you over the phone or by mail. It could provide a good opportunity to engage someone else on the subject.

Polly Mann is a co-founder of WAMM and regular contributor to this newsletter.
+++

Will They Be Listened to Now?  Support Essential Workers!          By Mary Beaudoin 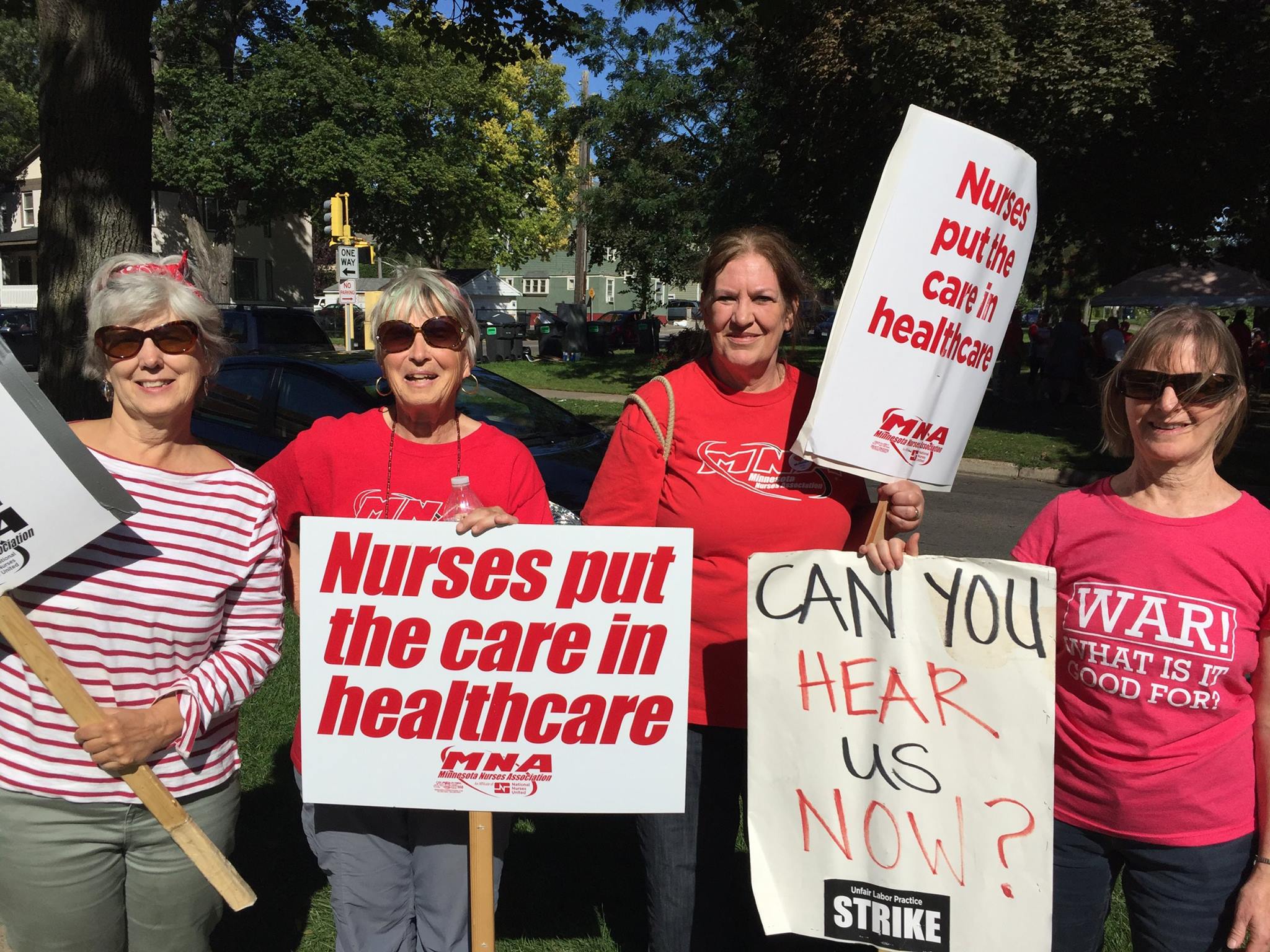 The current pandemic has revealed the inadequacy of the U.S. for-profit healthcare system and has shown us who the essential workers are without whom we can’t survive. But for years, striking nurses have been trying to alert their employers and the public of staffing shortages and of the need to implement changes in the healthcare system.

With the advent of the coronavirus, the situation has worsened. In unions across the country 230,000 registered nurses have joined forces and called for hospitals and the government to put measures in place for the safety of patients, the public, and the healthcare workers themselves – measures that should already have been there. In April, nurses unions declared: “Our members are dying – we demand protection now!”

Food industry workers, grocery store clerks, delivery drivers, and other service workers have also been endangered by lack of protective equipment such as masks as employers have been slow to respond. Now is the time to support these workers and to support the need for unions.

donate today.
By Polly Mann
“Can you hear us now?”  Mary Beaudoin, Sarah Martin (retired RN), Margaret Sarfehjooy (practicing RN), Carol Walker in 2016 on the nurses’ picket line in Minneapolis at Abbott Hospital.
Donate
By Rise Up TimesPublished On: May 19th, 20201 Comment