These are people who have just been cast aside, nobody does anything for them. The Democrats abandoned the working class decades ago. Republicans may take a populist line, but they are much more opposed to working people than even the Democrats in policies. 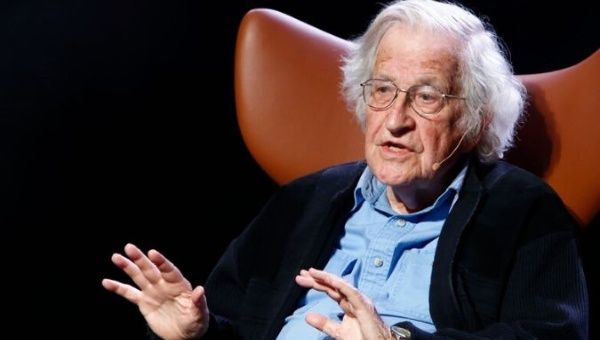 Noam Chomsky is one of the most cited scholars in modern history and among the few most influential public intellectuals in the world. | Photo: EFE

In an interview with Wallace Shawn, Noam Chomsky explains how elitism and atomization have created political rifts.

Building on a friendship initiated in Sandinista Nicaragua of the 1980s, Wallace Shawn — a committed activist but someone who is best known as an accomplished dramatist and actor — interviewed scholar and linguist Noam Chomsky. In their discussion, Shawn reflected on Chomsky’s words and called on him to address the ever-challenging question: how do we convince the people who were not in the room to care, to take action, given the scope and urgency of our current political crises?

RELATED:
Chomsky: Fixation on Russia May Have Handed Trump a 2020 Win

The following transcript is excerpted from their conversation, which can be read in full in the just-released book ‘Internationalism or Extinction,’ edited by Charles Derber, Suren Moodliar and Paul Shannon.

WALLACE SHAWN: Many of the people who do know about the consequences of nuclear war and climate change are quite well-educated people who are resented by a lot of people. Do you have any thoughts on how I mean there is a class difference that Trump supporters who laugh at the idea of global warming and climate change have a built-in resentment toward people who’ve been well educated and who may be better off economically? How do we reach them?

NOAM CHOMSKY: That’s serious. That is a very interesting phenomenon; it has to be dealt with sensitively and with understanding. As I mentioned, 40% of the population say it can’t be a problem because of the Second Coming. Now that’s a deep cultural problem in the United States. People who know something about US history should all… we should all understand it.

It’s very important to realize that this country was a cultural backwater until World War II. [Until then,] if you wanted to study physics, you went to Germany. You wanted to become a writer, an artist, you went to Paris. There were exceptions of course but it was overwhelmingly true, and it was true even though the United States was far and away from the richest, most powerful country in the world and had been for a long time. [There are] all kinds of historical reasons for that: it’s a very insular country. There aren’t many countries where you can travel 3,000 miles and be in about the same place where you left, not running into any different culture or language or anything like that.

Protected by oceans, we keep away from those bad guys, enormous internal resources that nobody else had. There were a lot of waves of immigrants that became integrated and so on, so there are a lot of reasons for it, but it’s there and you can’t ignore it. You can’t ignore it, and there is no point railing about atheism. These are issues that have to be understood, and it has to be understood that the churches really mean something to people, plenty of people, including the Trump supporters.

These are people who have just been cast aside, nobody does anything for them. The Democrats abandoned the working class decades ago. Republicans may take a populist line, but they are much more opposed to working people than even the Democrats in policies. Working-class males are — we are supposed to call them “middle class” in the United States, the phrase “working class” is a four-letter word here — but working-class males who are supporting Trump are actually supporting policies which are going to devastate them. Just take a look at the economic policies, the fiscal policies, and others. But it’s true that they are cast aside, and their values are being attacked. Their values are in many ways culturally traditional and pre-modern in the Western sense, but they are being attacked. One of the few refuges they have is the church. They are the church in a traditional community so you can’t just laugh at it, it’s serious. It has to be dealt with.

There is a very interesting book that just came out by Arlie Hochschild, a sociologist, who went to a pretty terribly impoverished area in Louisiana and lived there for six years and studied the people sympathetically. This is deep Trump country, and her results are quite interesting. For example, these are people who are being devastated by chemical and other pollution from the petrochemical industry, but they are strongly opposed to the Environmental Protection Agency.

When she asks why, they have reasons. They say, “Look, what is the Environmental Protection Agency? It’s some guy from the city with a Ph.D. who comes out here and tells me I can’t fish but he doesn’t go after the petrochemical industries. So, who wants them? I don’t want them taking away my job and telling me what I can do and speaking to me with the cultivated accents meanwhile I’m under attack by all this stuff.”

These attitudes are serious. They are significant. They deserve respect and not ridicule, and I think they can be addressed. For example, I think that say in the 1930s, I’m old enough to remember, in many ways, it was kind of like now; poverty was much greater. The depression was much worse than the current recession. In fact, it was a much poorer country than it is now.

They had a sense that things are going to get better. There were labor actions, the CIO’s organizing, there were left political parties, the unions were providing real services: a couple of weeks in the country, educational groups, workers education, ways for people to get together – somehow we’ll get out of all this. That’s lacking. It has become a very atomized society. People are alone in it: used to be their TV sets, now it’s their cell phones or iPhones or whatever. They’re very atomized, isolated, makes them feel very vulnerable.

These are the kind of things that can be overcome by organization and activism. My feeling [is] that the Trump supporters and the Sanders supporters could have been a unified bloc. Proper approaches to the problem take effort, sensitivity, and understanding of the kind for example that Hochschild showed with her sympathetic account of where these people are coming from and why. It’s easy, say in the New Yorker, to have a cartoon about Trump and how ridiculous it is, but that’s missing the point. Maybe it looks ridiculous, but he is reaching people for reasons and we should be interested in the reasons.

Actually, it’s the same story, to turn to something else, with young Muslims in the West who are joining the jihad movements. It’s not enough to scream at them; there are reasons. If you look at the circumstances in their lives, you can see the reasons and they can be addressed.

SHAWN: Real activism would start with a compassionate traveling into these unknown territories of our own land that Hochschild went into. What we can do in Boston and New York is less important than what we might be able to do if we went to Louisiana and moved there for a significant amount of time?

CHOMSKY: I don’t think we have to go many miles to find this. For example, a couple of years ago, I happened to be asked to give a talk at a high school in Boston, it’s called English High School, and the reason is because nobody there speaks English [as a first language]. There are maybe a dozen languages with different immigrant groups. It’s a very activist community. There are local activists who are discussing the kind of work that they do there, and it’s important and interesting right here in Boston. People feel that it’s hopeless, we can’t do anything.

How can we fight these big powers? Some of the things that were described I think were very instructive for me; I think they would [be] for all of us. For example, get together a group of mothers who want to have a traffic light at a street where their kids have to cross when they go to school. They organize leaflets, talk to each other, talk to the local representatives and other things. Finally, they get their traffic light and that’s empowering. That tells you that you can do something. We are not alone. We can do other things and then you go on from there; that’s how things develop. Yeah, Louisiana, but not far from home either, and there’s plenty [to do] incidentally – right in our own “educated” communities. The lack of understanding in educated circles is appalling. Almost everything I talked about tonight, for example, I doubt if a tiny fraction of well-educated academics who work in these areas would even know about it – that’s right, exactly where we live.

Considered the founder of modern linguistics, Noam Chomsky is one of the most cited scholars in modern history and among the few most influential public intellectuals in the world. He has written more than 100 books, his most recent being Internationalism or Extinction. Before coming to the University of Arizona as Laureate Professor of Linguistics in 2017, Chomsky taught at Massachusetts Institute of Technology for 50 years.

Wallace Shawn is an Obie Award-winning playwright and a noted stage and screen actor. He is the author of two nonfiction books, “Night Thoughts” and “Essays.” He is co-author of the movie “My Dinner with Andre” and author of the plays “The Fever,” “The Designated Mourner,” “Aunt Dan and Lemon,” and “Grasses of a Thousand Colors,” among others.