Despite not signing the 1992 Kyoto Protocol international agreement to fight climate change, the US succeeded in obtaining an exemption for all countries’ militaries from having to report, let alone cut, their carbon emissions, which Congress later locked in. 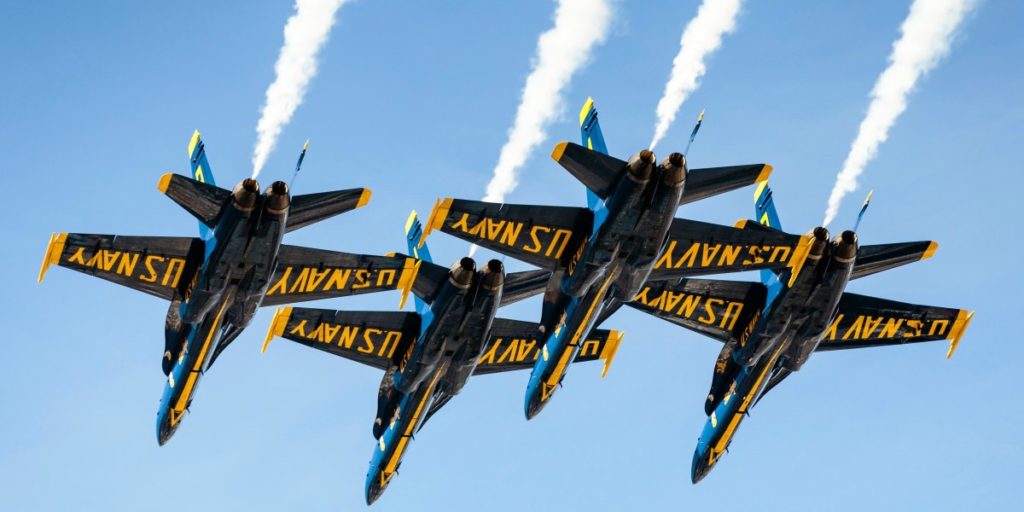 US military is responsible for the most egregious and widespread pollution of the planet, yet this information and accompanying documentation goes almost entirely unreported. 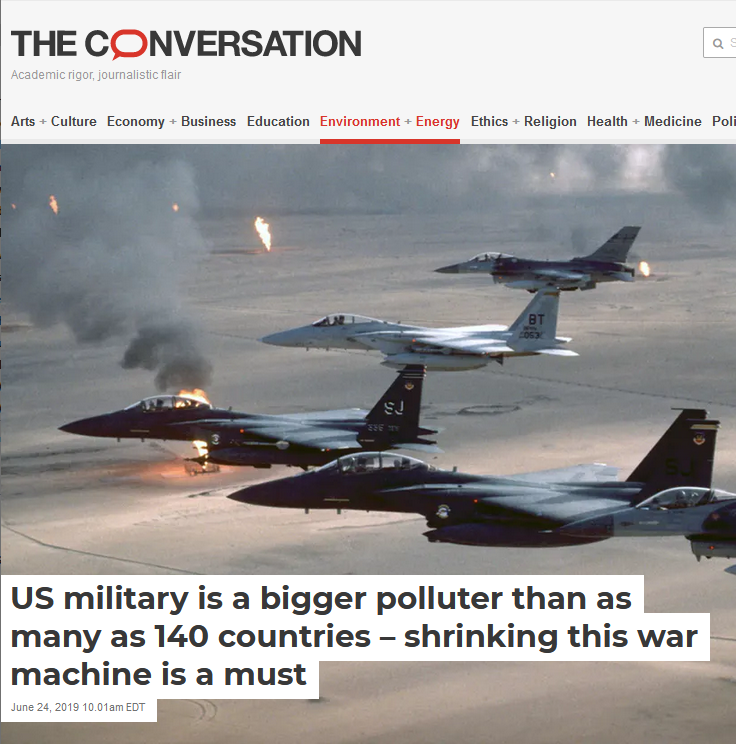 The Conversation (6/26/19) ran a piece by the authors of the Durham/Lancaster study.

Almost a decade later, Project Censored’s observations are still applicable, with two major studies published in June remaining buried by most major media outlets. The first study, “Pentagon Fuel Use, Climate Change, and the Costs of War,” by Neta Crawford for Brown University’s Costs of War Project, confirmed previous findings that the US military is “the single-largest producer of greenhouse gases (GHG) in the world,” and that the Pentagon is responsible for between “77% and 80% of all US government energy consumption” since 2001, and that from the beginning of the US invasion of Afghanistan in 2001 to 2017, the US military emitted approximately 1.2 billion metric tons of CO2 equivalent.

The second study, “Hidden Carbon Costs of the ‘Everywhere War’: Logistics, Geopolitical Ecology, and the Carbon Bootprint of the US Military,” published by Oliver Belcher, Benjamin Neimark and Patrick Bigger from Durham and Lancaster universities in the Transactions of the Institute of British Geographers (6/19), found that if the US military were a country, its “fuel usage alone would make it the 47th largest emitter of greenhouse gases in the world, sitting between Peru and Portugal.”

Yet these groundbreaking studies received no coverage in virtually all the US’s biggest newspapers and TV news channels. An initial search in the Nexis news database from June 1 to October 4 of the New York Times, Wall Street Journal, Washington Post, Los Angeles Times, NPR, PBS, ABC, MSNBC, CBS and CNN turned up nothing.

A broader Nexis search of all the English-language outlets only confirmed that the biggest media outlets in the country, with much better resources for reporting, are burying the study.

Here’s a list of the outlets, according to the Nexis news database, that mentioned the Costs of War study:

Here’s a list of the outlets, according to Nexis, that mentioned the study published in the Transactions of the Institute of British Geographers: 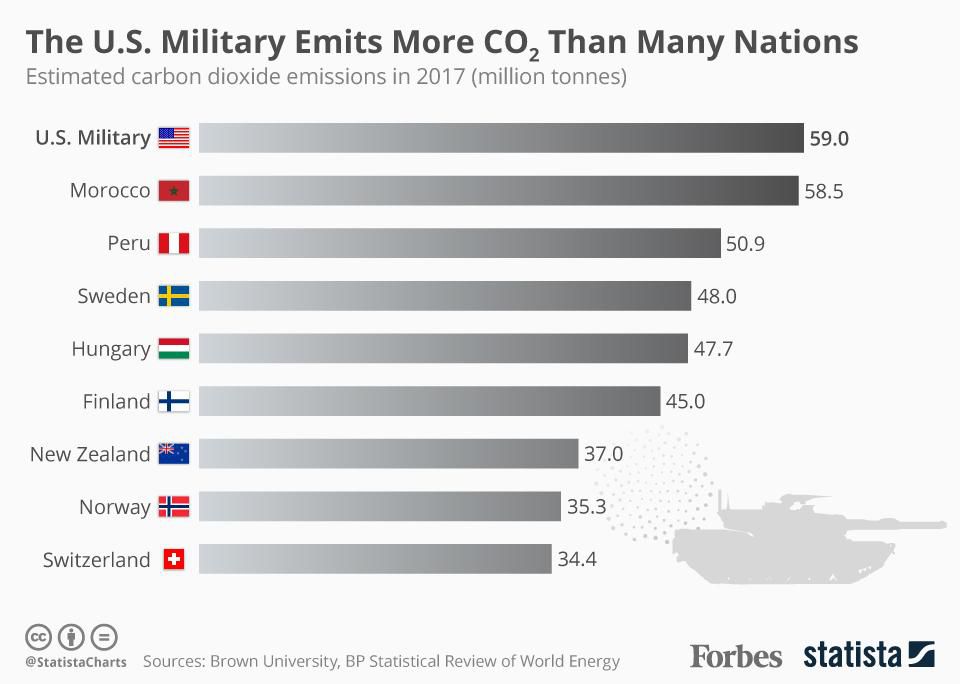 Forbes (6/13/19) ran a graphic comparing the Pentagon’s greenhouse emissions to those of medium-sized nations.

Aside from the findings, these studies are also especially significant because they’re the first to use comprehensive data based on the publicly available emissions data from the Department of Energy, and on multiple Freedom of Information Act requests to the US Defense Logistics Agency managing the US military’s supply chains, which includes hydrocarbon fuel purchases and distribution. Most greenhouse gas accounting focuses on how much energy and fuel civilians use, because it has always been difficult to obtain reliable and consistent data on the Pentagon’s carbon bootprint; the Pentagon doesn’t publicly and regularly report its fuel consumption or greenhouse gas emissions.

Despite not signing the 1992 Kyoto Protocol international agreement to fight climate change, the US succeeded in obtaining an exemption for all countries’ militaries from having to report, let alone cut, their carbon emissions, which Congress later locked in. Although that exemption was later removed by the 2015 Paris Accord—despite the Obama administration’s longstanding policy of undermining international climate agreements—the Trump administration has the US due to withdraw from the Paris Accord in 2020 (New York Times, 6/1/17), which would make it harder to collect data and conduct future studies like the ones above. This is why it’s especially important for media outlets to cover studies like this when they’re published.

Although the authors of both studies acknowledge that the US military has been cutting its emissions over the years, they both note how “existing military aircraft and warships” are “locking the US military into hydrocarbons for years to come,” and that the “Pentagon does not acknowledge that its own fuel use is a major contributor to climate change.” That shouldn’t be surprising. Given corporate media’s propagandizing for starting and staying in wars (FAIR.org, 10/23/17, 9/11/19) and for never ending arms races (FAIR.org, 5/17/19, 7/12/19), one should expect corporate media to bury evidence that the US military is a threat to itself and its citizens with its massive carbon output.

Excerpt: US military is responsible for the most egregious and widespread pollution of the planet

← Legalized Political Corruption Is So Much Bigger Than Trump: A Journey in 7 Charts
Interview with legendary whistleblower Daniel Ellsberg following his 89th arrest for resisting nuclear weapons, nuclear war and government secrecy →