As documented by the Congressional Research Service (24 July 2019), the four US ships that “operate in European waters to defend Europe from potential ballistic missile attacks”, are part of a fleet of 38 Aegis ships that will go up in 2024 to 59. In fiscal 2020, $ 1.8 billion is allocated to upgrade this system, including sites in Romania and Poland.

[By withdrawal] from the 1987 INF Treaty—which had eliminated all US-based intermediate-range nuclear missiles (between 500 and 5500 km) based on land, including the Cruise deployed in Comiso—the US started a new, dangerous race to nuclear weapons.

Promoting Committee of the #NO WAR campaign #NO NATO shared an update on Support the campaign for Italy’s exit from NATO – for a neutral Italy. Check it out and leave a comment:
PETITION UPDATE  SIGN THE PETITION HERE

Promoting Committee of the #NO GUERRA #NO NATO campaign   ITALY

This post has been translated by Google Translate from the Italian. Original title: UNDER THE «SHIELD» MISSILI NUCLEARI USA IN EUROPE

The NATO missile site of Deveselu in Romania, which is part of the US Aegis missile defense system, has finished the “update” begun last April. This was communicated by NATO, ensuring that “it did not confer any offensive capacity on the system”, which “remains purely defensive, focused on potential threats from outside the Euro-Atlantic area”.

The Deveselu site is equipped (according to the official description) with 24 missiles, installed in underground underground launchers, for the interception of short and intermediate-range ballistic missiles.

Another site, which will become operational in 2020 in the Polish base of Redzikowo, will also be equipped with this system.

Launchers of the same type are aboard the four US Navy ships that, located on the Spanish base of Rota, cross into the Mediterranean, the Black Sea and the Baltic Sea.

The deployment of the launchers shows that the system is directed not against the “Iranian threat” (as the US and NATO declare), but mainly against Russia.

That the so-called «shield» is not «purely defensive», explains the same war industry that made it, Lockheed Martin. It documents that the system is “designed to install any missile in any launch tube”, so it is suitable for “any war mission”, including “the attack on land targets”.

Subscribe to RiseUpTimes.org
Support independent media. Donate now — just click here to donate through PayPal. (You do not need to be a Pay Pal member.)

Lockheed Martin specifies that larger launch tubes may launch “the largest missiles such as those to defend against ballistic missiles and those for long-range attack”. Thus he concedes, in essence, that the installations in Romania and Poland and the four ships of the Aegis system can be armed not only with anti-missile missiles, but also with nuclear warhead Tomahawk cruise missiles capable of striking targets at thousands of km of distance.

As documented by the Congressional Research Service (24 July 2019), the four US ships that “operate in European waters to defend Europe from potential ballistic missile attacks”, are part of a fleet of 38 Aegis ships that will go up in 2024 to 59. In fiscal 2020, $ 1.8 billion is allocated to upgrade this system, including sites in Romania and Poland.

Other land-based installations and ships of the Aegis system will be deployed not only in Europe against Russia, but also in Asia and the Pacific against China. According to plans, Japan will install on its territory two missile sites supplied by the US, South Korea and Australia will acquire ships of the same system from the US.

Moreover, in the three months in which Deveselu’s equipment was brought to the USA to be “updated”, a Thaad mobile missile battery from the US Army was deployed on its site in Romania, capable of “bringing down a ballistic missile both in and out of the atmosphere “, but also capable of launching long-range nuclear missiles. Once the Aegis system is put back into operation – NATO communicates – Thaad has been “redeployed”. Does not specify where.

It is known, however, that the US military has deployed missile batteries of this type from Israel to the island of Guam in the Pacific.

In light of these facts, when the US tear up the Inf Treaty to install medium-range nuclear missiles close to Russia and China, the announcement – made in Moscow by Senator Viktor Bondarev, head of the Defense Commission – is not surprising that Russia deployed Tu-22M3 nuclear attack bombers in the Crimea. 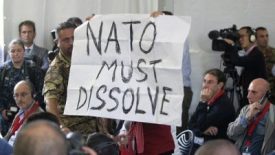 Photo: NONATO ITALY ,WHERE THE US MILITARY has 10 percent of all US foreign bases.

However, hardly anyone is worried because in Italy and in the EU, all this is hidden from the political-media apparatus.

The Pentagon announced that it had carried out a ground-based cruise missile (Cruise) test on August 18 in the Pacific. Launched from a mobile platform on San Nicolas Island in California, it hit the target at over 500 km away. The data collected in the test—the Pentagon informs—will serve to “develop future intermediate-range missile capabilities”. Withdrawn from the 1987 Inf Treaty—which had eliminated all US-based intermediate-range nuclear missiles (between 500 and 5500 km) based on land, including the Cruise deployed in Comiso—the US started a new, dangerous race to nuclear weapons.

The launch of the first missile of the category previously banned by the Inf Treaty was carried out just 16 days after the final withdrawal of the United States from the treaty, announced by Secretary of State Mike Pompeo on August 2nd. This confirms that, while the Inf Treaty was still in force, the United States carried out a first missile of the category prohibited by the Treaty.

In 2014, the Obama administration accused Russia, without bringing any evidence, of having experienced a cruise missile (9M729) of the category prohibited by the Treaty and, in 2015, announced that “faced with the violation of the Inf Treaty by the Russia, the United States is considering the deployment of ground-based missiles in Europe “. The plan was confirmed by the Trump administration: in 2018 the Congress authorized the financing of “a research and development program for a cruise missile launched from the ground by a mobile platform on the road”.

The images of the test released by the Pentagon show that the missile comes from a vertical launcher, like those used by the US Aegis missile defense system, already installed in the NATO missile site of Deveselu in Romania (and next year in Poland) and on four US Navy ships that, located on the Spanish base of Rota, cross into the Mediterranean, Black Sea and Baltic Sea. The same war industry that created the Aegis system, Lockheed Martin, documents that the system is “designed to install any missile in any launch tube”, so it is suitable for “any war mission”, including “the attack to land targets “.

Not being able to verify which missiles are installed in vertical launchers near its territory, Russia takes for granted that there are also nuclear missiles and moves accordingly.

Once new nuclear missiles have been made (both cruise and ballistic) of the category previously banned by the Inf Treaty, the US will ask European allies to “host” them, and thus to be at the forefront of nuclear confrontation with Russia. What will be the response of the next Italian government?

“The ‘apocalyptic’ chess game between the superpowers that is, between those that move on the highest plane of our civilization, is being played according to the rule ‘if either “wins” it is the end of both’; it is a game that bears no resemblance to whatever war games preceded it. Its ‘rational’ goal is deterrence, not victory, and the arms race, no longer a preparation for war, can now be justified only on the grounds that more and more deterrence is the best guarantee of peace. To the question how shall we ever be able to extricate ourselves from the obvious insanity of this position, there is no answer.”   — Hannah Arendt
(See ICAN.org and WomenAgainst MilitaryMadness.org for an answer.)

Donate
By Rise Up TimesPublished On: August 21st, 20191 Comment