Like many of you, I suspect, I live a divided life—as described by the Italian communist Antonio Gramsci—with the pessimism of the intellect and the optimism of the will.  —Polly Mann

The VIetnam War Era Oral History Project is a project of the Minnesota Historical Society that has documented the experiences of Minnesotans during the Vietnam War Era (c. 1960-1975). The interviews take a life history approach with a focus on on the years of the U.S. war in Vietnam and Southeast Asia. The interviewees include antiwar protesters and activists as well as veterans and others involved in or affected by the Vietnam War.

The Project held a reception for those interviewed on June 30, 2019. Each of the 101 interviewees was presented with 20 copies of a book that contained his/her interview with photos of their choice. The interviews will soon be made available in the permanent collection on the Voices of Minnesota oral history website (http://collections.mnhs.org/voicesofmn).

Included here are photos of Polly Mann, Co-founder of Women Against Military Madness; George Mische, Catonsville Nine; and Chuck Turchik, Minnesota Eight. Several of the Minnesota 8 were interviewed, including Don Olson, Pete Simmons, Frank Kronke and Bill Tilton. Michael Orange of Veterans for Peace Chapter 27 was also one of the interviewees, as was Dale Gutknecht, who, with others, launched a Twin Cities Draft Information Center in 1967.

For more information about the Catonsville 9, the Minnesota 8, and Polly Mann, see below.

I attended the reception as the guest of Polly Mann. Also included is a photo of me with John Pegg, an interviewee and a member of Veterans for Peace Chapter 80, Duluth, MN.

The Catonsville Nine were nine Catholic activists who burned draft files to protest the Vietnam War. On May 17, 1968, they went to the draft board in Catonsville, Maryland, took 378 draft files, brought them to the parking lot in wire baskets, dumped them out, poured over them home-made napalm (an incendiary used extensively by the US military in Vietnam), and set them on fire.  Then they sang, prayed, spoke with reporters and waited to be arrested by the Baltimore County police.
Baltimore (Catonsville, Maryland).(catonsville9.org)

Point of Interest: The Berrigan brothers were born on “the range” in Minnesota, that is, in Virginia on the Iron Range in northern Minnesota. The Berrigans left Minnesota when Daniel was five. He was the fifth of six sons, Phillip the sixth. ( Wikipedia) 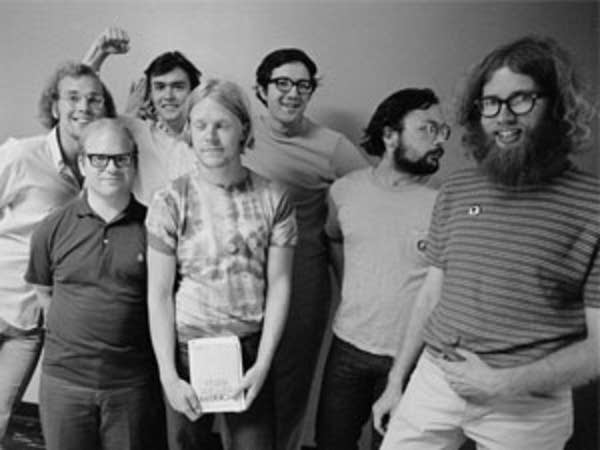 The Minnesota 8 were arrested on July 10, 1970, while trying to break into government offices in three Minnesota towns — Little Falls, Alexandria and Winona — to destroy draft records. During subsequent trials, they were dubbed “The Minnesota 8” and their defenses centered on their opposition to the Vietnam War and the use of the draft to force men to fight it.

The Minnesota 8 in 2008  Photo Courtesy of Cheryl Walsh Bellville

Seven of the eight: In front (from left), Chuck Turchick, Mike Therriault, Brad Beneke and Don Olson. Back row (from left): Pete Simmons, Bill Tilton and Frank Kroncke. Missing is Cliff Ulen, who lost touch after his guilty plea.

Polly Mann’s speech accepting “The Peacemaker of the Year” award from The Fellowship of Reconciliation on Sunday, Nov. 13, 2011 [abridged]:

Thank you, Fellowship of Reconciliation for this wonderful honor. I wonder if one reason I was chosen was the sheer number of years in which I’ve been engaged in peacemaking.

Like many of you, I suspect, I live a divided life—as described by the Italian communist Antonio Gramsci—with the pessimism of the intellect and the optimism of the will.

Polly at May Day, preparing to walk in the parade. Photo: Sue Ann Martinson

As we know, there is no blueprint for peacemaking. I remind myself
of a mother duck walking along the shore of a pond, bewildering onlookers who see her frantically flying over them, dipping low, quacking furiously. She appears to be absolutely crazy and then the onlookers see the fox skulking nearby. The mother duck is trying to confuse that fox. She has no plan but she knows the danger. We know the danger and it’s called war. So here I am with this obsession to move this country to abandon war, walking on this path with no markers, no blueprints—trying everything. My mission—our mission—trying to end war, is totally irrational to many.

Some of my actions were: walking around Lake of the Isles with a sign around my neck reading “Troops Out Now”; writing the president of the University of Minnesota for permission to hold a WAMM  fundraiser in his home benefiting Palestinians, citing a recent fundraiser for a Zionist group; acting as a southern colonel in a street theater performance having to do with Anita Hill and Supreme Court Justice Clarence Thomas; and attending a Nebraska demonstration against nuclear silos in a muddy, muddy field where one of the demonstrators said, ‘”Say, Grandma, what are you doing here?” and I was only 50 years old then.

We really should rename Women Against Military Madness, for the
military is but the mercenary for capitalism. The mission of the far‐flung U.S. military with approximately a thousand foreign bases is not to protect U.S. lives—really!!! Who has the military strength to challenge Uncle Sam?? The military protects our things. And we are propagandized by the day, by the hour, by the minute, of the importance of our things—our houses, clothes, travel. An important part of the propaganda is the need to be the top in whatever we do—own the best car, travel to the most exotic spots, have the smartest children. In other words, to compete. I truly believe that when we, personally, abandon competition we’re on the way to true
peacemaking.

Probably the most bizarre of my activities was to run for the U.S. Senate in 1988. I knew I couldn’t win, but I wanted to discuss the issue the other candidates would not, that issue that is most important to you and  me—war. It was most successful. Of course I didn’t win, but it was a great campaign. Many, many people were involved and I had a progressive platform with planks covering every major issue. I thought because I was a legitimate candidate, paid the necessary fees and so forth, that the media would cover me. The Twin Cities media did not. They made it clear that running for public office is comparable to a horse race. If you’re an unknown with a slim chance of winning, they are not interested. It’s those two favorites, that’s the race they’re interested in—not the issues. However, the small‐town papers throughout Minnesota who don’t have a lot of news gave my anti‐war message front‐page coverage.

As we all know, speaking out forcefully for nonviolence is not easy. But there is one great reward that is often overlooked and that is the wonderful, wonderful friends you meet along the way. At my advanced age you especially appreciate and are grateful for them. Today I have the most wonderful friends of my entire lifetime. I know the most dedicated and generous people imaginable. It is a reward unto itself. The journey has been not only rewarding but fun—real fun getting to know you. If people realized how much satisfaction can be found through association with like‐minded, peace‐loving people, we would be joined by millions.
Thank you.