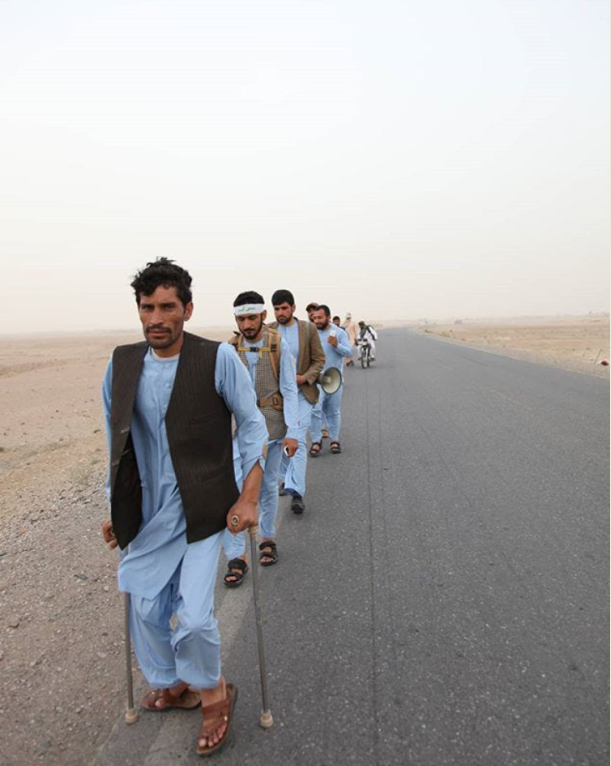 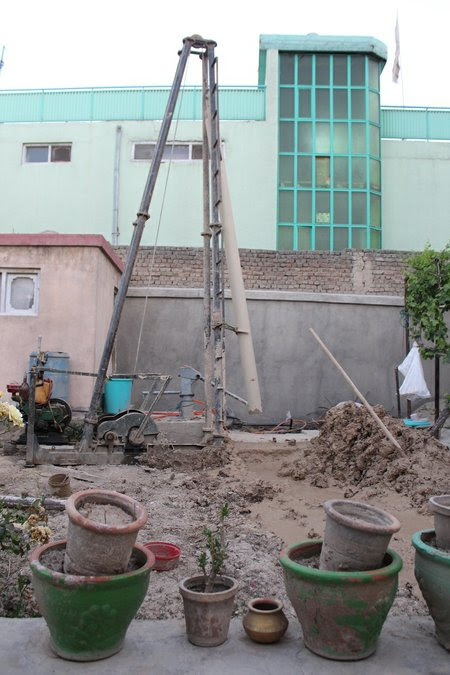 Here in Kabul in early June, outside the home of several Afghan Peace Volunteers, a large drilling machine is parked on what was once a lovely garden. To this now muddy patch, workers will soon arrive for another noisy, dusty day of digging for water. The well dried up a week ago. As of today, the household has no water.

Ongoing battles between militants, government forces, and international allies have destroyed much of Kabul’s water infrastructure, forcing people to drill their own wells.

Across Kabul, numerous households face similar water shortages. With an average annual rainfall of just fourteen inches, Kabul’s water table has been falling each year. The current population, estimated around 4.5 million, is expected to reach 9 million by 2050. The estimated groundwater potential is enough to supply only 2 million inhabitants with water.
Alarming reports say that drought now afflicts twenty-one of Afghanistan’s thirty-four provinces.
Rural families in drought-stricken areas watch their crops fail and their livestock die of dehydration. In desperation, they flee to urban areas, including Kabul, where they often must live in squalid, sprawling refugee camps. In the city, an already inadequate sewage and sanitation system, battered by years of war, cannot support the soaring population rise.
Droughts in other countries have led to violent clashes and civil wars. It’s difficult to imagine that Afghanistan, already burdened by forty years of war, will escape eventual water wars.
The most sophisticated and heavily armed warring party in Afghanistan is the U.S. military. Despite spending hundreds of billions of dollars on non-military aid to Afghanistan, the United States has done little to improve Afghanistan’s infrastructure or alleviate its alarming water crisis. President Donald Trump’s interest in what’s happening under the ground in Afghanistan is focused exclusively on the U.S. capacity to extract Afghanistan’s mineral wealth, estimated to be worth trillions of dollars.
Ordinary Afghans could be forgiven for feeling paralyzed and defeated by controlling elites who ignore their most basic human needs. Yet every day, Afghan communities reject continued war and call for peace.
On May 13, a single-file procession of Pashto men started off on a 400-mile trek along dusty roads from Helmand to Kabul, to call for the Afghan government and the warring parties to end the war.
The participants are asking the Afghan government and militants to stop fighting. They are walking during Ramadan, the month when observant Muslims fast from food and water between sunrise and sundown, becoming ever more mindful of people who lack water and food.
During the past three weeks, throngs of people in cities and towns along their route have shown solidarity with the walkers.
My young Afghan friends show steady resilience in the face of war and destitution. They are growing up with a keen sense of the importance of water for life and the essential need to share resources. They also know the importance of resisting those who menace people with military might. 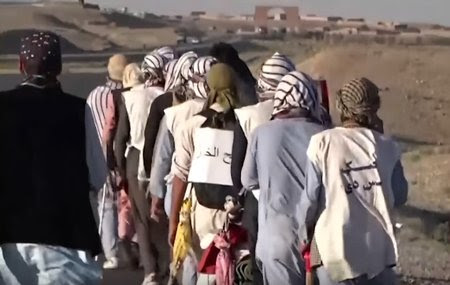 In this unpredictable time, I can’t help but wonder at Afghan people, scarred by war, facing drought and impoverishment, digging deep into their rich cultural and historical resources to take a lead in efforts to abolish war and build a better world.
A version of this article initially appeared in The Progressive.
Kathy Kelly (Kathy@vcnv.org) co-coordinates Voices for Creative Nonviolence. While in Kabul, she is a guest of the Afghan Peace Volunteers.

Like many other independent news and media sites, Rise Up Times has noticed a decline in the number of people looking at articles due to censorship by Google and Facebook. Independent journalism has become the last bastion in seeking and telling the truth as government and corporate lies are promoted by the mainstream corporate media. Please support us now and share articles widely. The people, Yes!
Sue Ann Martinson, Editor, Rise Up Times

Donate
By Rise Up TimesPublished On: June 6th, 20181 Comment