Bradley Manning: a tale of liberty lost
in America

The US does nothing to punish those guilty of war crimes or Wall Street fraud, yet demonises the whistleblower 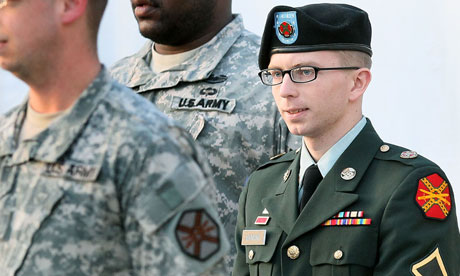 ‘The repressive treatment of Bradley ­Manning is one of the disgraces of Obama’s first term.’ Photograph: Mark Wilson/Getty Images
Over the past two and a half years, all of which he has spent in a military prison, much has been said about Bradley Manning, but nothing has been heard from him. That changed on Thursday, when the 23-year-old US army private accused of leaking classified documents to WikiLeaks testified at his court martial proceeding about the conditions of his detention.
The oppressive, borderline-torturous measures to which he was subjected, including prolonged solitary confinement and forced nudity, have been known for some time. A formal UN investigation denounced those conditions as “cruel and inhuman”. President Obama’s state department spokesman, retired air force colonel PJ Crowley, resigned after publicly condemning Manning’s treatment. A prison psychologist testified this week that Manning’s conditions were more damaging than those found on death row, or at Guantánamo Bay.
Still, hearing the accused whistleblower’s description of this abuse in his own words viscerally conveyed its horror. Reporting from the hearing, the Guardian’s Ed Pilkington quoted Manning: “If I needed toilet paper I would stand to attention and shout: ‘Detainee Manning requests toilet paper!’” And: “I was authorised to have 20 minutes sunshine, in chains, every 24 hours.” Early in his detention, Manning recalled, “I had pretty much given up. I thought I was going to die in this eight by eight animal cage.”
The repressive treatment of Bradley Manning is one of the disgraces of Obama’s first term, and highlights many of the dynamics shaping his presidency. The president not only defended Manning’s treatment but also, as commander-in-chief of the court martial judges, improperly decreed Manning’s guilt when he asserted in an interview that he “broke the law“.
Worse, Manning is charged not only with disclosing classified information, but also the capital offence of “aiding the enemy”, for which the death penalty can be imposed (military prosecutors are requesting “only” life in prison). The government’s radical theory is that, although Manning had no intent to do so, the leaked information could have helped al-Qaida, a theory that essentially equates any disclosure of classified information – by any whistleblower, or a newspaper – with treason.
Whatever one thinks of Manning’s alleged acts, he appears the classic whistleblower. This information could have been sold for substantial sums to a foreign government or a terror group. Instead he apparently knowingly risked his liberty to show them to the world because – he said when he believed he was speaking in private – he wanted to trigger “worldwide discussion, debates, and reforms”.
Compare this aggressive prosecution of Manning to the Obama administration’s vigorous efforts to shield Bush-era war crimes and massive Wall Street fraud from all forms of legal accountability. Not a single perpetrator of those genuine crimes has faced court under Obama, a comparison that reflects the priorities and values of US justice.
Then there’s the behaviour of Obama’s loyalists. Ever since I first reported the conditions of Manning’s detention in December 2010, many of them not only cheered that abuse but grotesquely ridiculed concerns about it. Joy-Ann Reid, a former Obama press aide and now a contributor on the progressive network MSNBC, spouted sadistic mockery in response to the report: “Bradley Manning has no pillow?????” With that, she echoed one of the most extreme rightwing websites, RedState, which identically mocked the report: “Give Bradley Manning his pillow and blankie back.”
As usual, the US establishment journalists have enabled the government every step of the way. Despite holding themselves out as adversarial watchdogs, nothing provokes their animosity more than someone who effectively challenges government actions.
Typifying this mentality was a CNN interview on Thursday night with WikiLeaks founder Julian Assange conducted by Erin Burnett. It was to focus on newly released documents revealing secret efforts by US officials to pressure financial institutions to block WikiLeaks’ funding after the group published classified documents allegedly leaked by Manning, a form of extra-legal punishment that should concern everyone, particularly journalists.
But the CNN host was completely uninterested in the dangerous acts of her own government. Instead she repeatedly tried to get Assange to condemn the press policies of Ecuador, a tiny country that – quite unlike the US – exerts no influence beyond its borders. To the mavens of the US watchdog press, Assange and Manning are enemies to be scorned because they did the job that the US press corps refuses to do: namely, bringing transparency to the bad acts of the US government and its allies around the world.
Bradley Manning has bestowed the world with multiple vital benefits. But as his court martial finally reaches its conclusion, one likely to result in the imposition of a long prison term, it appears his greatest gift is this window into America’s political soul.