People Have Changed: A Legacy of the U.S. War in Iraq

“In Baghdad especially where the violence has been continuous over the last nine years, I am equally aware that the barricades and checkpoints exist because of my country’s war of choice. And the concrete walls are everywhere.”

Baghdad—Yesterday was a beautiful autumn day in Baghdad. As I was visiting two families in widely different neighborhoods, I was able to traverse a large part of the city. I looked with eyes that have not seen Baghdad for nine years. Today, it is a city of stark contrasts. Bright new autos wherever one looks. I saw them up close as we waited endlessly in gridlocks due to checkpoints. Although I was not conspicuous with my gown and head covering, I was careful not to gaze around and gawk when we were stuck in traffic jams. 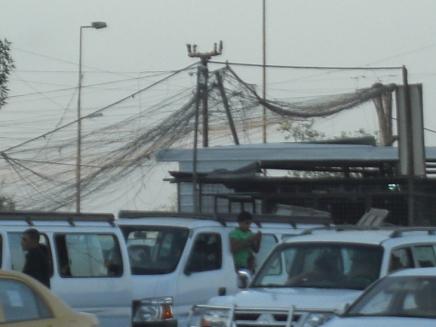 Above this gridlock you can also see the web of electrical wires.

Above this gridlock you can also see the web of electrical wires. Despite the warm welcome I have received everywhere I have traveled on this trip to Iraq, I am conscious that I am from the U.S. In Baghdad especially where the violence has been continuous over the last nine years, I am equally aware that the barricades and checkpoints exist because of my country’s war of choice. And the concrete walls are everywhere. 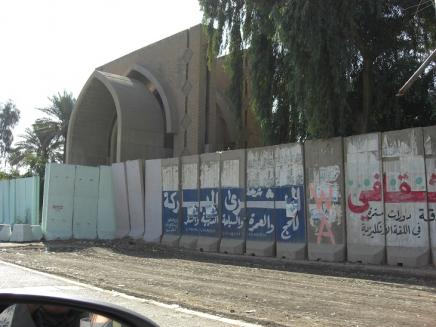 The entrance of Mustansiriya University on Palestine Street.

If anyone thinks that the war is over in Iraq, I have only to open my “At a Glance” calendar where I have tried to note the number of Iraqi casualties each day over the last nine plus years: deaths due to explosions, bombs, assassinations. Just a few randomly selected numbers from 2012 (these are the number of dead, the number of wounded is of course much greater). 63, 54, 78, 97, 28, 36, 105, 24, 41, 115… the list goes on and on.
One of my hopes on this trip is to visit Iraqi families who have had to return from Syria. Having fled the violence in Iraq, they came to Syria where I met them as refugees. Now they are threatened once again, and there are no countries willing to take them. Many have returned to Iraq, and we are anxious to know how they are doing. The parents of one family met us at Bab El Morat in Al Kadimiya, on the crowded street leading to the beautiful shrine of the Imam El Kadem Musa bin Jaffa. 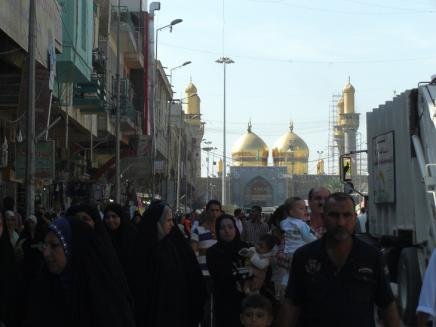 The golden domes glistened in the sun. My senses came alive as the couple led us through a labyrinth of souqs, passed the multi-colored array of goods and the throngs of people to their humble, two–room apartment above the stalls.

What a joy to see this extended family again, the children now another year older. But the joy was tainted with sorrow as our friends related the details of their leaving Syria, and their disappointment in what they have found back in Iraq.
One mother returned to Iraq in Jan. 2012 with her three children. In Syria, the family had received threats that their daughter would be kidnapped if they didn’t leave. Her husband followed in March when he realized there was no hope to be resettled to the United States, at least from Syria where there was no longer a US embassy.
Just a few days ago there was an explosion nearby which has deeply shaken the family. I asked the oldest girl, a beautiful child now in sixth grade, how school was going. Not good, she answered. She described quite dramatically that last week there was a great explosion in her school. The teacher fled leaving the frightened students in the classroom. The door was locked and at first the kids hid under the desks. Later, when banging on the door proved futile, they managed to climb out through an opening above the door. She somewhat proudly showed me the bruises on her arm! They asked “Do you think we can be resettled to the U.S.?” I try to explain gently but realistically what the economic situation in the United States looks like with people out of work and losing homes and benefits. Not to mention the cultural differences. The father was adamant saying, “But there are explosions here and people are being killed! We are afraid for the children… People have changed here, even our families. It is not like it was in the past, when people looked after one another.”
The second family we visited had arrived only two weeks ago to their newly rented apartment, a two-room dwelling reached by rather treacherous metal stairs. They are paying $500 a month (includes electricity and generator costs), using money borrowed from both sides of the family. I was appalled by the amount. The family fled Syria in Aug. of 2012. The mother and their four children went to live with her family in an area of Iraq that has been quite violent. “There you can rent a big house for $100 a month, because it is so dangerous with militias. Here it costs $500 to live in a safe area.” The father went to Erbil, in northern Iraq, to look for work. He returned to Syria three weeks later to find their apartment burned and their belongings gone. He stayed only three days in Syria before returning again to Iraq.
They mother and children looked exhausted, especially the mother. She cries each day. She and her husband have been going from house to house until now.
Except for the little toddler who doesn’t know me, the children greet me warmly. The oldest son was traumatized by the war in Iraq. His friend and classmate was killed before his eyes, and he has always had a haunted look about him. A handsome boy, he has grown a foot since I last saw him and is very thin. As we visit I look at the youngest son whom I have known for at least four years now. No, I am not mistaken. He has a visible facial twitch. He has always been the family clown and I have pictures of him over the years making funny faces. He is about 7 or 8 years old now and painfully thin. Their baby girl is now fifteen months old. She too is pale and thin. The government has promised each returnee a sum of money, 4 million Iraqi Dinars, the equivalent of $3,200. This family hasn’t received a penny. They owe money. The father is looking for work. They too asked me if they could be resettled in the United States. Once again I spoke of the obstacles they would face in the United States. “People have changed,” the father said sadly. “The war has destroyed the inside of humanity.” 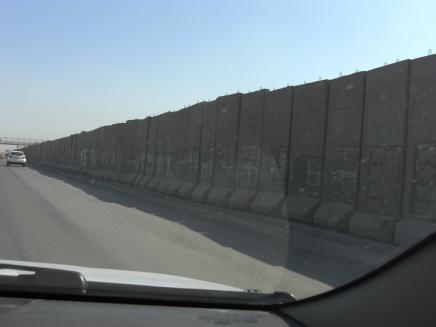 Afterward in the taxi, driving past the ubiquitous concrete blast walls, I ponder the legacies of war and wonder how a city heals and how we can begin to break down the barriers.

Cathy Breen is member of Voices for Creative Nonviolence (www.vcnv.org). She is traveling for six weeks in Iraq.