Never popular in the first place, domestic counterextremism programs are now likely to become much more aggressive and bellicose.

Sageman says that the shortcomings of CVE models reflect a misapprehension of what drives political violence. 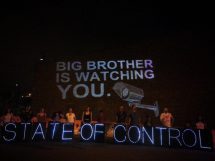 Michael German | The Failure of Our Counter-Intelligence Discourse (Video)

Michael German, former FBI agent and a fellow with the Brennan Center for Justice’s Liberty and National Security Program at the New York University of Law, spoke at Peacestock on terrorism. Peacestock is sponsored by Minnesota Chapters of Veterans for Peace.

The Entrapped Somali Youth Trial | What Does It Mean?

Chris Hedges: “The permanent war economy is sustained through fearmongering—about communists during the Cold War and about Islamic jihadists today.”

June 3, 2016 · by Rise Up Times · in Activism, Constitutional Rights, Justice

Building Community Resilience is part of a larger program developed by the FBI and the U.S. Department of Justice. The program is nationally known as “Countering Violent Extremism” (CVE). The program was launched in 2011 in Boston, Los Angeles, and Minneapolis as a preventive counter-terrorism program.

Greenberg: Given the staggering array of tools granted to the national security state domestically since 9/11, it’s a wonder (not to say a tragic embarrassment) that such killings occur again and again. They are clearly not being prevented and at least part of the reason may lie in the national security state’s ongoing focus on “counterterrorism,” that is, on Islamic extremism.