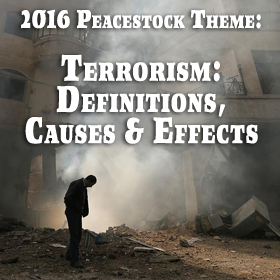 Speaking as one of the keynote speakers [at Peacestock] was Michael German, a fellow with the Brennan Center for Justice’s Liberty and National Security Program at the New York University of Law, which strives to ensure that our US government respects human rights and freedoms in conducting the fight against terrorism.

German worked for sixteen years as a special agent with the FBI where he specialized in domestic terrorism and covert operations. He left the FBI in 2004 after whistle- blowing on the deficiencies of the FBI’s counterterrorism operations. Mr. German then worked with the ACLU in Washington D.C. office.

German is a prolific writer and has appeared on many news media programs. He wrote his first book Thinking Like a Terrorist: Insights of a Former FBI Undercover Agent which was published in 2007. Another recent book is The Terror Factory: Inside the FBI’s Manufactured War on Terrorism. One of his essays was entitled, “Why Doesn’t the Intelligence Community Care Whether Its Security Programs Work?”

Donate
By Rise Up TimesPublished On: July 22nd, 2016Comments Off on Michael German | The Failure of Our Counter-Intelligence Discourse (Video)