June 22, 2022, was the 81st anniversary of Nazi Germany’s invasion of the Soviet Union, and a prominent German antiwar activist took the occasion to publicly question why the German government is now supporting neo-Nazi organizations in Ukraine.

As a result, that activist is now facing the possibility of up to three years in prison.

Heinrich Bücker runs Berlin’s popular Coop Antiwar Cafe, which since 2005 has been a gathering space for activists working on a wide range of issues. Since 2019 the cafe has co-organized the weekly event “Frente Unido América Latina” in front of the U.S. Embassy. He’s a member of the “Kommunistische Platform” in the party DIE LINKE; a member of the League of Anti-Fascists; and represents the U.S.-based World Beyond War in Berlin. The cafe also represents the “Aufstehen” Initiative in Berlin Mitte, backing the left politician Sahra Wagenknecht and organizing left events against sanctions and for peace.

On June 22, Bücker gave a speech at an event hosted by Berlin’s Friedenskoordination (Peace Coordination) at the Soviet War Memorial in Berlin’s Treptower Park, in which, according to a statement on the antiwar cafe’s website, he said that “… it seems incomprehensible to me that German politics should again support the same chauvinistic and especially Russophobic ideologies on the basis of which the German Reich found willing helpers in 1941. The SS and Wehrmacht used Ukrainian national-fascist organizations as repressive and murderous squads against their own countrymen, including millions of Jewish men, women and children.”

The collaboration of ultra-nationalist Ukrainian organizations with the Nazi occupation is a matter of historical record. And, before the present war, Western mainstream media would routinely report on the existence of present-day fascist organizations in Ukraine, such as the Azov Battalion, Right Sector, National Militia, C-14 and many others. (https://www.reuters.com/article/us-cohen-ukraine-commentary/commentary-ukraines-neo-nazi-problem-idUSKBN1GV2TY)

But that coverage has now ended.

On Oct. 19, Bücker received a letter from the Berlin State Criminal Police Office notifying him that he was under investigation for possible violation of Paragraph 140 of the German Criminal Code, which has to do with disturbing the public peace. A violation of the statute can be punished by a fine or a prison sentence of up to three years. The investigation was apparently prompted by a complaint by a Berlin attorney upset about Bücker’s speech.

“In Germany, we are currently experiencing a narrowing of the space for debate and massive restrictions on freedom of expression, caused by one-sided reporting in the mainstream-media,” Bücker writes. “There are now a number of individuals who are in the focus of the German criminal investigation authorities. Similar tendencies are also reported from other EU [European Union] countries.” 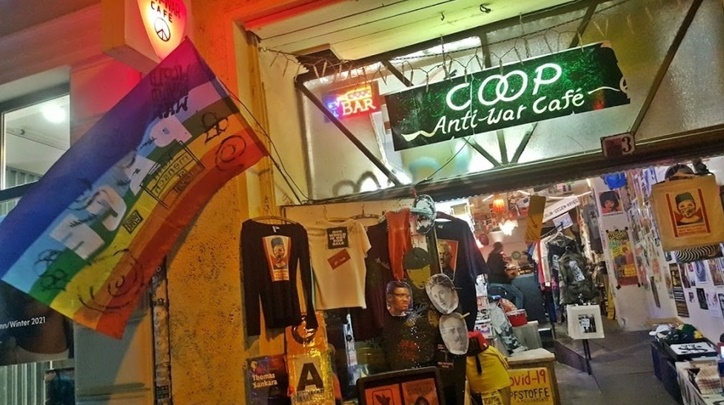 The Coop Antiwar Cafe itself also has come under attack. In addition to threatening emails, the cafe’s front windows were recently smashed.

Along with his June 22 speech, Bücker also initiated a statement on the war in Ukraine that questioned the official line that it’s simply an act of unprovoked Russian aggression. Instead, the statement, posted on the cafe’s website, points to the steady eastward expansion of NATO up to the very borders of Russia, and U.S. and European support for the 2014 coup that drove out the elected president of Ukraine and brought in a right-wing government anxious to join NATO and hostile to both Russia and the country’s ethnic Russian minority.

Another reason for the police interest in Bücker could be the prominent role he has played in promoting an anti-imperialist statement on the war in Ukraine initiated by the U.S-based Odessa Solidarity Campaign, a project of the Virginia Defenders for Freedom, Justice & Equality. That statement, similar to the one initiated by the Coop Antiwar Cafe, has been endorsed by more than 230 organizations and individuals in 22 countries, with nearly two-thirds of the endorsers from Germany.

Meanwhile, in the United States, the African People’s Socialist Party is calling for support in the face of expected indictments of four of its leaders and prominent supporters who have been actively speaking out against U.S. support for Ukraine. The APSP is a Pan-African organization that for the past 50 years has been opposing U.S. wars at home and abroad.

In response to the police pressure, Bücker’s allies and supporters in Germany have been preparing a united defense effort. Stay tuned for new developments and calls for solidarity.

For more information on repression directed against antiwar activists and efforts to support them, see:

Phil Wilayto is editor of The Virginia Defender newspaper and coordinator of the Odessa Solidarity Campaign. He can be reached at: DefendersFJE@hotmail.com

Why Not Pay Fine Imposed for Actions Against Nuclear Threats?

I’ve been sentenced to a 50-day jail term in Germany for refusing to pay fines imposed for trespass convictions after two “go-in” actions against nuclear weapons threats. The actions were two uninvited entries into Germany’s Büchel Air Base where up to 20 US hydrogen bombs are stationed under a policy called “nuclear sharing.” The sentence will begin January 10 at the Billwerder prison in Hamburg.

I’ve appealed the convictions to the Constitutional Court, Germany’s highest, which has yet to issue a decision. The appeal complains that expert witnesses in international law — who were prepared to validate my defense of “crime prevention” — were not allowed testify, effectively eliminating my right to present a defense

To read John’s full article click the title above.