WASHINGTON — The American Civil Liberties Union and Physicians for Human Rights renewed calls today for U.S. Immigration and Customs Enforcement to end the practice of force-feeding detained people, and to end its reliance on mass immigration detention, after the Intercept obtained and released footage of the federal agency force-feeding a man engaged in a peaceful hunger strike.

This shocking footage is the “first publicly released video of force-feeding done under the auspices of the federal government,” according to the Intercept’s report.

The story notes that, “with Ajay Kumar’s consent, the Intercept first requested the video through the Freedom of Information Act in January 2020. After ICE refused their request, the Intercept filed a lawsuit, and ICE subsequently agreed to turn over the footage — after redacting the faces and names of everyone who appears in the video, aside from Kumar’s.”

“ICE’s horrifying response to peaceful hunger strikes — which are free speech protected by the First Amendment — with coercion and violence continues to expose the cruelty of our immigration detention system,” said Eunice Cho, senior staff attorney with the ACLU’s National Prison Project. “It’s past time to halt this inhumane practice, and ultimately to shut down the ICE detention machine.”

The Intercept video follows a 2021 research report by the ACLU and PHR titled Behind Closed Doors: Abuse and Retaliation Against Hunger Strikers in U.S. Immigration Detention, which was informed by more than 10,000 pages of documents obtained under the Freedom of Information Act.

The report covered hunger strikes by at least 1,378 people from 74 countries across 62 public and private immigration detention centers in 24 states from 2013 to 2017, spanning both the Obama and Trump administrations. 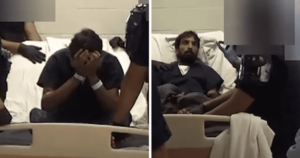 ‘This is not humanity’: Disturbing video shows ICE authorities force-feeding asylum seeker Ajay Kumar was held for about a year in the ICE detention center, where he says he was mistreated and his Hindu religious beliefs were not respected

“Respect for patient autonomy is at the heart of medicine. Force-feeding is not only a violation of an individual’s human rights, but a violation of the oath each of us take, as physicians, to respect the rights of those entrusted to our care. The World Medical Association, the American Medical Association, and Physicians for Human Rights have unequivocally stated that force-feeding is in violation of medical ethics. It is high time that ICE and the immigration justice system align with the medical community and outlaw this horrific, painful, and destructive practice in all detention settings,” said Dr. Parveen Parmar, associate professor of Clinical Emergency Medicine at the Keck School of Medicine, University of Southern California, and a PHR medical expert.

“Under international law, force-feeding constitutes cruel, inhuman, or degrading treatment and can rise to the level of torture, violating multiple international human rights treaties. This abhorrent practice is often not possible without the participation or complicity of health professionals. Although this chilling footage depicts former President Trump’s Department of Homeland Security, force-feeding continues today under the Biden administration. President Biden should seize the opportunity to change course by adopting a new directive on hunger strikes and addressing the underlying cause of so many hunger strikes: an abusive immigration detention system,” said Joanna Naples-Mitchell, JD, U.S. research advisor at PHR and co-author of the ACLU-PHR report on hunger strikes in ICE detention.

A first-person/victim’s account of attorney Ron DeSantis’ role in supervising force-feeding at Guantanamo:  https://www.youtube.com/watch?v=FFonj6o0fTI. There is also speculation about his subsequent role as Senior Legal Advisor with Special Ops Task Force in Falluja.

Source: Major Todd E. Pierce, U.S. Army (Ret.) volunteered to serve as a Guantanamo defense attorney in 2008 and continued in that on active-Army duty until the end of 2012 when he had to retire. Prior to becoming a Judge Advocate, he was trained as an Army Sr. PsyOps NCO.