As the U.S. Midterm Elections Approach, the Gap Between Western Media’s Depiction of the War in Ukraine and the Actual War Waged on the Ground Appears To Be Widening More Dramatically 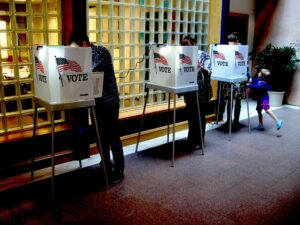 We are urged at every turn to dismiss everything Vladimir Putin says as upside down to the truth. Those of us who keep our heads, while all about us others are losing theirs and blaming it on us, risk dismissal when we take the Russian president seriously.

Never mind. It is time simply to dismiss those who dismiss.

In his long interviews with Oliver Stone five years ago, Putin observed that it is impossible to work with the Americans because everything is held hostage by their election cycles. So true. Too bad so many among us are not capable of listening to the Russian leader on this point and learning from it something about how our post-democratic system malfunctions.

As the late Robert Parry and Gary Sick established, there is ample reason to suspect that the Reagan campaign conspired with Iran during the 1980 presidential campaign to delay the release of American hostages at the U.S. embassy in Tehran until after the Nov. 4 elections.

Whatever happened between Reagan’s people and the clerics governing Iran, the Great Communicator went on to present himself as the strongman savior of the hostages, who were released on Jan. 20, 1981, the day Reagan was inaugurated after trouncing Jimmy Carter at the polls.

Now we have the Ukraine case, and we need not bother with “ample reason.” It is open-and-shut evident at this point that we witness two wars as the Armed Forces of Ukraine face off with the Russian military. There is the presented war, the meta-war, you might say, and there is the waged war, the war taking place on the ground, nothing meta about it.

The Biden administration has been committed from the first to fighting the presented war, the war of appearances, because maintaining public support for this dreadful folly is essential to keeping it going. And with the midterm elections near, the administration and the clerks in the liberal press serving it are pressing the presented war with the vigor of D–Day generals.

“Stay with us, all you wavers of blue-and-yellow flags. Forget about inflation and what you have to pay for a gallon of gas or a box of Wheaties. We are getting this done. The tide has turned. The good, courageous, self-sacrificing Ukrainians are winning against those looting, war-crime committing, village-destroying, brutal — they are ever and always brutal — Russian forces. Don’t lose heart. Support us on Nov. 8 as we support Ukraine.”

This is the pitch, the presentation.

Parenthetically, I do not think this rubbish will make a whit’s difference when those Americans foolish enough to go to the polls next week. But the White House and the Democratic field have to put this across because Republicans are hammering them daily about the irrationality of their profligate commitment to a proxy war that simply cannot be won on the ground.

The presented war has been at variance with the waged war more or less since the Russian intervention began on Feb. 24. This is why Western correspondents, in any case apparently short on guts and integrity, are pleased enough to conform to the Kyiv regime’s ban on coverage from the front lines. By and large, these correspondents report the presented war.

But the gap between the presented war and the waged war now appears to be widening more dramatically.

On one hand, the Ukrainians’ celebrated counteroffensives, launched in August, appear to be exhausted with no significant gains achieved. You also have Russia’s call-up of as many as 300,000 reservists and the appointment of Sergei Surovkin, a no-nonsense general who led Russia’s campaign against the Islamic State in Syria, as the overall commander of the Ukraine operation.

On the other hand you have … you have the midterm elections. Since the summer, as the Democrats’ prospects on Nov. 8 grow ever dimmer, those prosecuting the presented war have grown ever more incautious in their departures from the waged war.

I could be wrong, but this latest phase in the presented war began on Oct. 12, the midterms a month away, when *The New York Times* quoted Lloyd Austin saying Ukraine’s offensives will continue well into the winter and that Russia’s recent attacks on Ukraine’s infrastructure have fortified the West’s unified resolve to continue supporting the Kyiv regime.

Austin’s comments seem to me to mark an important point of departure from reality. Neither of the above-quoted assertions is true according to all available evidence. Ukraine’s counteroffensives, after its forces pushed through an open door in the northeast, have nothing to show for themselves and are in for a debilitating winter. The West’s resolve, no secret to anyone — even the Times — looks increasingly wobbly.

But here’s the thing about the presented war: What is said in its cause does not have to be factual or in any way true; it simply has to be said over and over again.

On Sunday the Times published a long piece by Andrew Kramer under the headline, “With Western Weapons, Ukraine Is Turning the Tables in an Artillery War.” The subhead was even bolder: “In the southern Kherson region, Ukraine now has the advantage in range and precision guidance of artillery, rockets and drones, erasing what had been a critical Russian asset.”

Wow, I said over my fourth morning coffee. Turning the tables, erasing Russia’s superiority in artillery: This is a lot of turning and erasing.

Kramer’s report rests on interviews with a Ukrainian lieutenant, a first lieutenant, a major, and a Polish consultant sitting in Gdansk — all of them, fair to say, troops in the presented war. They are full of ballsy, let-me-at-’em remarks: “We can reach them and they cannot reach us,” “One shot, one kill,” “It will be Stalingrad in winter for them.” Which tell us precisely nothing.

Kramer’s assessments, all nothing more than echoes of the above-noted sources, are in this same line:

“There is no mistaking the shifting fortunes on the southern front….

Ukraine now has artillery superiority in the area….

This firepower has tipped the balance in the south…”

These statements are absolutely perpendicular to what one reads from sources other than Kramer’s — and he should be ashamed to present them as reliable.

Here’s a doozy from the first lieutenant: “We hear a lot of rumors they are abandoning the first lines of defense.”

Kramer seems accurate here: The first lieutenant is almost certainly hearing a lot of rumors to this effect. But that’s it. I read a lot of reports that Russian forces, having evacuated many residents of Kherson, are sending in engineering brigades that are assiduously fortifying the city in preparation for whatever defense may be necessary in coming months.

I tell you, it has got to the point that when I read Kramer’s pieces I need a safe place where they have cookies, board games and fluffy blankets — and no mainstream dailies, no NPR and no BBC. His work is the presented war as it is fought, ever more fantastically, as the midterm elections approach.

Alexander Mercouris, the London-based podcaster, spends an hour each evening analyzing the state of things on the ground in Ukraine, using all available sources with the due caution this work requires.

These sources are many-sided: Western mainstream, Western independent, Russian mainstream, Russian independent, Ukrainian of all kinds, other sources entirely. He is to be credited for the exceptional granularity of his reports and his often nuanced political analysis — as, for instance, his recent take on the collapse of the Ostpolitik tradition in German politics.

Mercouris astutely points out that the Russians are little concerned with the presented war and prosecute the waged war according to substantive, tactical and strategic considerations alone — not what any given move will look like when Western media get their hands on it.

In his view, Ukrainian forces have nearly shot their bolt, the Western powers are running out of weapons to send them, Russian forces are beginning gradually to advance once again, and the buildup of Russian troops and matériel — anyone who looks can see — may portend one or another kind of major assault, possibly a knockout blow, in coming months.

While I have not reported directly on any of the questions raised here, the preponderance of the evidence presented leaves me to conclude reports such as Mercouris’ are far more accurate than what Western media offer and that these media trade primarily in the propaganda of which the presented war is made.

It will be interesting to see what happens to American media’s reportage from Ukraine once the midterm elections are over and there is nothing more for the Democrats to win or lose. At a certain point the realities of the waged war will be too large and imposing to distort, obfuscate, or leave unreported.

In the case of Russiagate, when the Times and all the media that ape it had finished all their lying and disinformation and the house of cards collapsed, they tiptoed quietly out the side door. I see no chance of this in the Ukraine case. American media helped to make up Russiagate out of whole cloth. The Ukraine conflict is too real for all that.

In my expectation, the administration and these media will, post-elections, wage the presented war with less intensity, possibly bringing it at least slightly more in line with the waged war. They will have to think of something as, gradually but almost certainly, reality catches up to them and they cannot make a war disappear.

If you prefer to write a check please click on the About/Donate section in the black bar menu at the top of the page. |