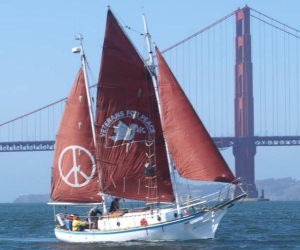 From September 2022 through December 2023 the Golden Rule will sail “The Great Loop”. Starting in the Minneapolis/St Paul area, the Golden Rule will sail down the entire Mississippi River, along the Gulf states, up the east coast to Maine, through the Hudson River and Erie Canal, around the Great Lakes, and down the center of the country back to the Gulf of Mexico. This 15-month voyage will take the Golden Rule into 100 towns and cities and cover 11,000 miles.Along the way, Golden Rule representatives will speak to many groups about how their actions can bring about nuclear disarmament and stop the possibility of nuclear war.

Note: For those of you outside the Twin Cities, read the background information here and if you live along any part of the 11,000 mile route of the Golden Rule, how to plan a visit from the boat and crew.

In the Twin Cities (Minneapolis/St. Paul and Red Wing) area several events are planned for people to hear about the Golden Rule, her history and the present Great Loop Voyage.  Already there have been several events in Duluth with Helen Jaccard, Golden Rule project manager, Gerry Condon, president of the Steering Committee, and crew members.  Here is a link to the Duluth Press Conference.

For more about the Golden Rule’s history and upcoming epic voyage, here is a recently made video featuring the movie Making Waves, with comments from Helen Jaccard, created by Women Against Military Madness and Veterans for Peace, Chapter 27, Twin Cities.

Here is a link to an article about the Golden Rule.  Little Boat, Big Idea

Link to a printable schedule: https://drive.google.com/file/d/1SymVeyQkhgc5QgatlYTNpgdNFQfTARNW/view?fbclid=IwAR3gr3m1eruC2Mnbpe6LTuFkCeRkiElO1ovt5mVG9VWiTGeLF6yEd2ew790

Come learn about the Golden Rule sailboat and how to stop the possibility of nuclear war.

Meet the crew and learn about the Golden Rule Peace Boat and how to stop the possibility of nuclear war.

Stillwater – Lowell Park
Peace in the Park, A Family Day

September 18, 2 to 5 pm. Come learn about the story and mission of the Golden Rule by Helen Jaccard, Project Director.

Music by folksinger Bill McGrath and by the String Beans, Indigenous drumming by Tony Frank.

Celebrate the  beginning of 12 Days Free From Violence

Music and speakers from WAMM and Veterans for Peace and TC Nonviolent, 4;00 to 5;00 at Longfellow Plaza, Lake St. and W.River Road (Minneapolis side).

From 5:00-6:00 September 21: Join the WAMM Vigil to End War on the Lake Street/Marshall Avenue Peace Bridge between Minneapolis and St. Paul, a vigil dedicated to ending U.S. involvement in all aspects of war. Signs provided or bring your own. Sponsored by the End War Committee of Women Against Military Madness. FFI: 612-827-5364

.On this Inter-national Peace Day, Golden Rule Director Helen Jaccard and congregant Mike McDonald invite us into the Golden Rule’s work for peace.

CORRECTION: The TIME of St. Paul – Crosby Farm Park Peace in the Park, A Family Day on September 25, is now scheduled from 11:30 to 2:30 due to a glitch with the park service.  The program remains the same.

Come learn about the story and mission of the Golden Rule by Helen Jaccard, Project Director.  Music by Larry Long and by the String Beans. Indigenous drumming by Tony Frank.

Please bring blankets, picnic food, or join in the FINGER FOOD ONLY POTLUCK. BYOBeverage. (No alcohol allowed in public parks.)

BONUS: the Golden Rule will be docked a short walk away, and tours of the Peace Boat during the afternoon will be announced! 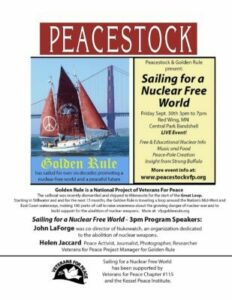 Peacestock Live: An event to raise awareness about the growing danger of nuclear war and to build support for the abolition of nuclear weapons.

ABOUT THE SPEAKERS AND PERFORMERS 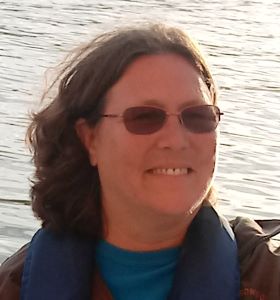 Golden Rule Director Helen Jaccard is an activist, journalist, and photo-grapher. She is a member of the Disarm/End Wars Committee of the Women’s International League for Peace and Freedom (WILPF.) Helen writes about the environmental costs of war and militarism.

Tony Frank is a Minnesota   indigenous drummer who performs at local events.

John LaForge was co-director  of Nukewatch, a peace and environmental justice group in Wisconsin, that publishes a newsletter of the same name. He is co-editor with Arianne Peterson of Nuclear Heartland, Revised: A Guide to the 450 Land-Based Missiles of the United States.

Larry Long is a Smithsonian Folkways recording artist, singer/songwriter, community organizer and educator who has made his life work the celebration of everyday heroes. Studs Terkel called Larry “a true American Troubadour.”

Bill McGrath lives in Northfield but coincidentally is a native of Stillwater. An associate member of Veterans for Peace, he has made his living pri marily as a writer.

Thomas R. Smith is a poet, teacher writer and editor. Hundreds of his poems have been published in journals and anthologies on three continents.  His work has reached national audiences on Garrison Keillor’s radio show Writer’s Almanac and former US Poet Laureate Ted Kooser’s syndicated newspaper column, American Life in Poetry.                               (over)

Darren Thompson, a Native American flute player and journalist from the Lac du Flambeau Ojibwe Indian Reservation in Northern WI, has served communities and move-ments in cultural, creative, and resourceful ways that address American Indian cultural revitalization, history, and partnership through his teaching and playing, In his dedication to the preservation of American Indian Music he has performed at many of North America’s most prominent American Indian organizations and events, including the Smithsonian in Washington DC. 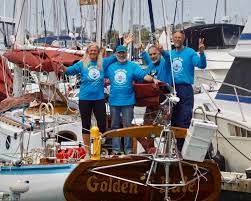 The Golden Rule’ embarks on 15-month, 11,000-mile anti-nuclear mission. Activists have championed  nuclear disarmament onboard the wooden sailboat since 1958