Pope Francis’s new book is called Against War: Building a Culture of Peace.  I’m sure some Catholics will recommend it to you. But let this atheist do so as well. 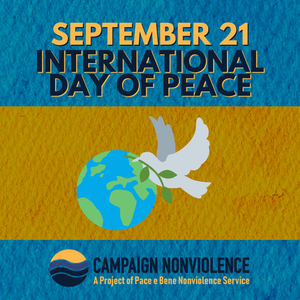 Click the photo for information about Campaign Nonviolence’s 12 Days of Peace and Action.

Perhaps this book won’t be promoted by those Catholics sitting on the U.S. Supreme Court or in the U.S. Congress or just living in the United States and owning a television. But if 5 percent of Catholics in the world were to read this book and act on it, we’d see the abolition of war and militaries. We all know what the chances of that are. But what if we got, say, 2 percent of non-Catholics to act on it too?

Of course, it depends a bit on what is meant by “Act on it.” And even on what the “it” is. Pope Francis is pretty clear: “There is no such thing as a just war: they do not exist!” (There’s an afterword by Andrea Tornielli that tries to clarify that in the war in Ukraine, Russia is the bad side, but Tornielli stops short of supporting the warmaking of the other side, much less the arming of it by the world’s weapons dealing nations. After all, he’s writing an afterword to a book that’s just told everyone that there can be no just war, no just weapons dealing, and no just spending on militaries while children go hungry — not to mention that we need to end the practice of thinking of others as enemies.) So the “it” to act on is the desperate need to abolish war and preparations for war.

How do we act on it? Well, the primary advice, most often repeated by Pope Francis, is to pray for peace. To some of us, this is of course staggeringly depressing in its comical stupidity. We’re up against the military industrial complex and the war culture, and you want us to have a chat with an imaginary friend? But Pope Francis also says that we need to speak out, support good journalism, support diplomacy, engage in peace education, and learn from and use nonviolent activism. If a small percentage of supporters of war abolition were to do those things, I for one really wouldn’t care if we also talked to giant rabbits, especially not if it helped some people somehow to do those other things.

Pope Francis is openly focused on trying to prevent the destruction of life on Earth. He writes at one point that he’s received a letter complaining that he does not speak enough about Heaven. He says this is correct and proceeds to speak about Heaven for about half a page. But he does not take his eye off the prize of preventing the nuclear destruction of “this world.” If every believer in every religion could gain the same sort of focus, my feelings about the existence of religion would improve significantly.

In my encyclical Fratelli tutti I proposed that the money spent on arms and other military expenditures be used to set up a World Fund to finally eliminate hunger and to foster the development of the poorest countries, so that their inhabitants would not resort to violent or deceptive solutions and would not be forced to leave their countries in search of a more dignified life. I renew this proposal today, especially today.

This book is a passionate warning that World War III is underway in scattered pieces and escalating, that nuclear catastrophe is almost inevitable if we do not change course. Pope Francis writes:

“So, step by step, we are moving toward catastrophe. . . . We are moving toward it as if it were inevitable. . . . Greed, intolerance, ambition for power, and violence are motives that push forward the decision for war, and these motives are often justified by a war ideology that forgets the immeasurable dignity of human life, of every human life, and the respect and care we owe them. . . . In my encyclical Fratelli tutti I proposed that the money spent on arms and other military expenditures be used to set up a World Fund to finally eliminate hunger and to foster the development of the poorest countries, so that their inhabitants would not resort to violent or deceptive solutions and would not be forced to leave their countries in search of a more dignified life. I renew this proposal today, especially today. Because war must be stopped, all wars must be stopped, and they will only stop if we stop ‘feeding’ them.”

Elsewhere in the book, Pope Francis writes: “Who is selling weapons to the terrorists? Who sells weapons today to the terrorists, who are carrying out massacres in other areas — let us think of Africa, for example? It is a question that I would like someone to answer.” Pope Francis goes out of his way to avoid naming Western governments, and there is no doubt that he knows the answers to his questions. But for the benefit of others, and since he has asked . . .

When we look at nations’ weapons exports we find this pattern:

“A true peace can only be an unarmed peace,” Pope Francis writes, making the case that weapons cannot defend or deter, but in fact generate warfare. He also writes:

“Listening to one another can lead to mutual understanding and esteem, and even to seeing in an enemy the face of a brother or sister.” Think of an “enemy” and try that.

Here are more books to read:

Against War: Building a Culture of Peace by Pope Francis, 2022.
Ethics, Security, and The War-Machine: The True Cost of the Military by Ned Dobos, 2020.
Understanding the War Industry by Christian Sorensen, 2020.
No More War by Dan Kovalik, 2020.
Strength Through Peace: How Demilitarization Led to Peace and Happiness in Costa Rica, and What the Rest of the World Can Learn from a Tiny Tropical Nation, by Judith Eve Lipton and David P. Barash, 2019.
Social Defence by Jørgen Johansen and Brian Martin, 2019.
Murder Incorporated: Book Two: America’s Favorite Pastime by Mumia Abu Jamal and Stephen Vittoria, 2018.
Waymakers for Peace: Hiroshima and Nagasaki Survivors Speak by Melinda Clarke, 2018.
Preventing War and Promoting Peace: A Guide for Health Professionals edited by William Wiist and Shelley White, 2017.
The Business Plan For Peace: Building a World Without War by Scilla Elworthy, 2017.
War Is Never Just by David Swanson, 2016.
A Global Security System: An Alternative to War by World Beyond War, 2015, 2016, 2017.
A Mighty Case Against War: What America Missed in U.S. History Class and What We (All) Can Do Now by Kathy Beckwith, 2015.
War: A Crime Against Humanity by Roberto Vivo, 2014.
Catholic Realism and the Abolition of War by David Carroll Cochran, 2014.
War and Delusion: A Critical Examination by Laurie Calhoun, 2013.
Shift: The Beginning of War, the Ending of War by Judith Hand, 2013.
War No More: The Case for Abolition by David Swanson, 2013.
The End of War by John Horgan, 2012.
Transition to Peace by Russell Faure-Brac, 2012.
From War to Peace: A Guide To the Next Hundred Years by Kent Shifferd, 2011.
War Is A Lie by David Swanson, 2010, 2016.
Beyond War: The Human Potential for Peace by Douglas Fry, 2009.
Living Beyond War by Winslow Myers, 2009.
Enough Blood Shed: 101 Solutions to Violence, Terror, and War by Mary-Wynne Ashford with Guy Dauncey, 2006.
Planet Earth: The Latest Weapon of War by Rosalie Bertell, 2001.
Boys Will Be Boys: Breaking the Link Between Masculinity and Violence by Myriam Miedzian, 1991.

David Swanson is an author, activist, journalist, and radio host. He is executive director of World BEYOND War and campaign coordinator for RootsAction.org. Swanson’s books include War Is A Lie and When the World Outlawed War. He blogs at DavidSwanson.org and WarIsACrime.org. He hosts Talk World Radio. He is a Nobel Peace Prize Nominee.