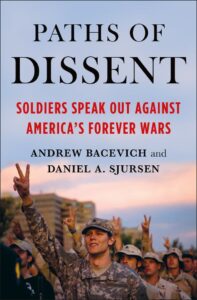 Click the image below to listen to the podcast:

Andrew Bacevich, a retired Army Colonel who fought in Vietnam, and Danny Sjursen, a retired Army Major who did tours in Iraq and Afghanistan, have just published Paths of Dissent: Soldiers Speak Out Against America’s Misguided Wars. Bacevich and Sjursen, West Point graduates, like many writers in the book, come out of the military culture. They began as true believers, embracing the myths of American goodness and virtue and the military honor code pounded into them as young cadets at the military academy. The reality of combat, as it has for generations, exposed the lies told by the generals and politicians. We are not a good and virtuous nation. God does no bless us above other nations. Victory is not assured. War is not noble and uplifting. The clash between the reality of combat, and the mythical version of combat consumed by the public, one that propels young men and women into war, creates not only dissonance and moral injury, but an existential crisis combat veterans, at least those who are self-reflective, must cope with for the rest of their lives.

Chris Hedges is a PulitzerPrize–winning journalist who was a foreign correspondent for fifteen years for The New York Times, where he served as the Middle East Bureau Chief and Balkan Bureau Chief for the paper. He previously worked overseas for The Dallas Morning News, The Christian Science Monitor, and NPR. He is the host of show The Chris Hedges Report.

If you prefer to write a check please click on theAbout/Donate section in the black bar menu at the top of the page.