“NATO currently recognizes five warfighting domains: land, sea, air, space, and cyberspace. An increasing amount of literature suggests adding a sixth: the cognitive domain. The gap this new domain is supposed to fill is the territory fought over in the battle for the minds of a country’s population.”

—Introduction to “Cognitive Warfare and the Use of Force,”
from Stratogem, a Norwegian military connected “think tank” 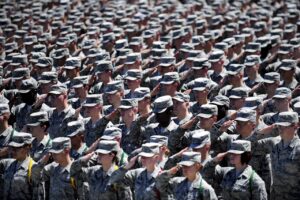 Cognitive war is waged against the U.S. population to capture our minds and assimilate us thoroughly into a militaristic weltanschauung or worldview.

U.S. Cognitive Warfare: the Battle to Capture Our Minds

The North Atlantic Treaty Organization (NATO) is led by the U.S. with its military doctrine of Full Spectrum Dominance for control over all the territory in the world – and, as the quote above explains, that includes the territory of human consciousness, itself. In other words, the U.S. “warfighting domain” begins with fighting against “the cognitive domain.” It is deemed necessary to maintain the population’s “will,” lest we turn against our U.S. wars as happened when large numbers no longer supported the Vietnam War.*

The national security state’s battle within the cognitive domain of the American population was lost in 1971 over Vietnam when disclosures about that war were revealed with the release of the Pentagon Papers by Rand Corporation whistleblower Daniel Ellsberg.

The narrow military concept of the “Kill Chain,” – identify the target, dispatch forces to the target, initiate the attack on the target, destroy the target – is much more expansive in the eyes of American militarists who have promoted U.S. wars since the end of the Cold War. One explains “quantum information technologies [advanced mathematics, science and technology] will have sweeping economic and social implications, but they will also have profound military applications that . . . will transform the entire kill chain—not just how militaries act but also the character of their understanding and decision making.” Long before there are boots on the ground or missiles in the sky, the U.S. population must be “conditioned” to go to and wage war. Beginning in the “cognitive domain,” U.S. culture, itself, is part of the Kill Chain. While not new, it’s now taken to entirely new heights as “cognitive warfare,” against our own U.S. population. 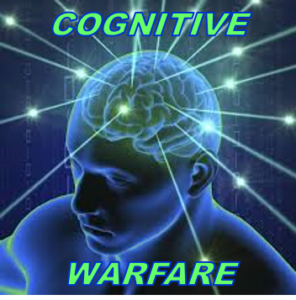 Historically, the cognitive “domain” or territory (our minds), has actually been the battle space of U.S. militarism and militarists. The hyper-militaristic culture of today was created largely by the combined elements of what President Eisenhower called the Military-Industrial Complex, now extended to include the media, academia, think-tanks, etc., all working to “enculturate” the U.S. population into a militaristic weltanschauung, or worldview. This did not happen by accident but was, instead, the product of an unrelenting cognitive campaign, which can be traced, among other causes, to the formation of militaristic think tanks beginning at the end of WW II. The model was the Rand Corporation created by the U.S. Air Force.

With the Rand leading the way, the U.S. military, the CIA, and other complementary think tanks, thereafter, elevated psychological warfare research and theory far above the “primitive” pioneers: Edward Bernays “the father of public relations” whose book, Propaganda, was published in 1928, and Abraham Maslow, who first developed an “hierarchy of needs” in 1943 to explain human motivations. In fact, whether attributed to him or not, it was the 19th century German philosopher, Edmund Husserl, with the “science of consciousness” (which came to be known as “Phenomenology”) whose insight is exploited today for how to manipulate “mass consciousness,” though that wasn’t his intended purpose.

In his 2012 book: Hearts and Minds: Israel and the Battle for Public Opinion, Nachman Shai, an Israeli with his extensive experience in anti-Palestinian cognitive warfare, explained and promoted the advanced level to which cognitive warfare has been taken from its origins as mere propaganda.

In Britain, it is called the fight for hearts and minds. The U.S. military uses the expressions psychological warfare, perception management, influence management, and information operation. The idea speaks about consciousness: the strategy of limited conflict is to win a decision of consciousness in the society with the help of military means. The battle is for the society’s consciousness and for national resilience.

Furthermore, he stated, “Consciousness is not a natural and inherent concept but rather a structured process, continually shaped by interested parties and by those who wield wealth and power.” So, because our minds don’t remain in the same state all the time, they can be molded and manipulated by forces outside of them with an agenda.

How this is done in its current terminology is described in a publication of the Israeli “Institute for National Security Studies” entitled: “The Cognitive Campaign: Strategic and Intelligence Perspectives.” Its Preface states: “It is important to distinguish between cognition and the cognitive campaign.”

Cognition is the set of insights that an individual or individuals have regarding the surrounding reality and the way they want to shape it, derived from the  set of the values and beliefs through which they examine and interpret their  environment and work to confront its inherent challenges, and even to change it.

Two prominent examples of negative cognitive campaigns are Wikileaks’ founder, Julian Assange, being imprisoned for years now, and whistleblower, Edward Snowden, forced to take refuge in a foreign country to avoid the same fate, as the U.S. silences them lest an “undesirable cognitive state” develop while the U.S. population realizes that war crimes were committed, and citizens were spied on.

An example of a powerful “cognitive campaign” that was be used to produce the desired cognition would be what political operative Karl Rove was alleged to have said about the United States: “We’re an empire now, and when we act, we create our own reality.” This is not just a hubristic statement. In fact, such campaigns were always the way that the CIA conducted post-WWII coups. Further, it can be speculated that, based on principals of CIA coups, cognitive campaigns were introduced into U.S. political races with the 1972 Nixon campaign by political consultant, Arthur Finkelstein and his “Six Party Theory,” which broke demographics into six groups for targeting.

As the authors of “The Cognitive Campaign: Strategic and Intelligence Perspectives”: wrote:

The cognitive campaign is not new, and it is an inseparable aspect of every strategic and military conflict. In recent years, this struggle has played a much more important role than in past conflicts; at times it takes place without a direct military context and is not even led by military bodies. The cognitive campaign is a continuous campaign; its prominence is greater in the period between wars (as a part of the “campaign between wars”).

But, in fact, as these authors know, there is no such thing as “between wars” in Israel or the United States, with both countries in “Perpetual War,” regardless of the level of active hot war they are waging at any given moment; that’s why cognitive campaigns must never stop.

The U.S. government, with its militaristic civilian allies, has been at work waging aggressive cognitive war against the U.S. population for decades now, with the objective of “totalizing” a collective militaristic consciousness which can be mobilized for war anytime deemed desirable.

That’s done by perpetually inciting “hostile feelings and hostile intentions,” as has been done against Russia, China, Iran, et al., so that a war with any, or all, can explode at any moment.

Major Todd E. Pierce, U.S. Army (Ret.) volunteered to serve as a Guantanamo defense attorney in 2008 and continued in that on active-Army duty until the end of 2012 when he had to retire. He continues representing a Guantanamo prisoner on a Guantanamo appellate team he’s been on since 2009. In that representation he has regularly seen the U.S. “cognitive campaign” being waged to conceal from the American public the illegality of the Military Commissions. Prior to becoming a Judge Advocate, he was trained as an Army Sr. PsyOps NCO.