The NATO summit is happening at the same time that the US/NATO proxy war against Russia is waging in Ukraine.  Therefore, it is important that the peace movement has shown a strong opposition to NATO at this time.  NATO is set to revise its orientation and to become more of a worldwide tool for US aggession and imperialism.

Report on the anti-NATO protests in Madrid

​During the days before the June 28 – 30 NATO Summit in Madrid, thousands rallied in the streets and meeting halls of the city in opposition to the NATO summit.  Protesters include people from the United States including Ann Wright, Paki Weiland of Code Pink and others, as well as myself and other members of UNAC.  People also came from many other countries around the world. Two meetings were held in Madrid to counter the NATO summit, one called the Peace Summit and the other the Counter Summit.  Both recognized the aggressive character of the US led NATO alliance.  The Peace Summit’s final resolution can be found here, and rough translation of the Counter Summit’s final resolution can be found here. [read more] 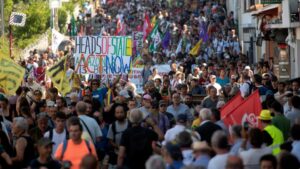 Thousands gather at G7 protests. Photo: CNN  Underneath the message Heads of State Act Now are the words the ‘Amazon is burning.’ 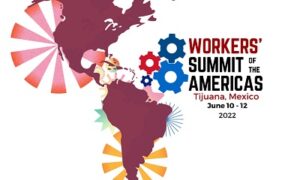 The United States organized a Summit of the Americas in Los Angeles and
excluded Cuba, Nicaragua and Venezuela.  As a result many countries refused to attend.  It showed that the US is losing its hold over many of the country of Latin America as many move to the left and away from imperialist domination.

Alternative meetings and protests were held in Los Angeles and Tijuana, Mexico.