We have no time to waste on further militarized fecklessness of the sort that has, in recent years, cost our country and others all too dearly. We can ill afford to defer King’s revolution in values further.

I have to admit that, as I read the nightmarish front-page stories daily — and yes, I’m old enough to still read the New York Times in print every morning — and absorb the latest news about Vladimir Putin’s egregious war in Ukraine, I can’t help thinking: how strange that our own nightmarish wars, involving the invasions of Afghanistan and Iraq, two countries nowhere near our borders, and a set of other conflicts across the Greater Middle East and Africa, never got this kind of attention.

It mattered not at all that, according to the Costs of War Project, they would result in close to a million dead (hundreds of thousands of them civilians) and at least another 38 million of us (or, being American, perhaps I should say them) displaced from their homes. Our wars never got covered like this, front-page-style, day after day, week after week, and by now, sadly enough, we can nearly say month after month, often to the near-exclusion of anything else, including the ongoing destruction of this planet. Today, unbearably little of what once was known as America’s “Global War on Terror” is remembered, no less memorialized. In fact, I can’t remember anything quite like the coverage of the ongoing Ukraine horror since at least the days right after 9/11.

That, I suppose, is the difference between wars started by the good guys on Planet Earth (us, naturally) and those started by the bad guys (the Vlad and crew). And Vladimir Putin is indeed a brutal autocrat, not to speak of a genuinely unnerving and disturbing human being.

It’s sad indeed that, in these years, as TomDispatch regular Andrew Bacevich, author most recently of After the Apocalypse: America’s Role in a World Transformed, reminds us today, we’ve not had someone like Martin Luther King to speak out against the devastation we (and yes, in this case, I do mean we Americans) have been causing on this planet in this century. I have no doubt that, if he had been alive, King would indeed have spoken out strongly against our wars, as well as the present Russian horror in Ukraine. With that in mind, consider for a moment the world that he might have wished for us, instead of the one we have. Tom [Englehardt, Editor. Tom Dispatch] 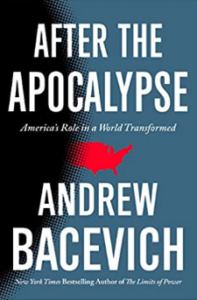 I recently participated in a commemoration of Martin Luther King’s address “Beyond Vietnam — A Time to Break Silence,” originally delivered on April 2, 1967, at New York City’s Riverside Church. King used the occasion to announce his opposition to the ongoing war in Vietnam.  Although a long time coming in the eyes of some in the antiwar movement, his decision was one for which he was roundly criticized, even by supporters of the Civil Rights Movement.  He was straying out of his prescribed lane, they charged, and needed to get back where he belonged.

This year’s 55th anniversary event, also held in Riverside Church’s magnificent sanctuary, featured inspiring Christian music and a thoughtful discussion of King’s remarks. Most powerful of all, however, was a public reading of the address itself.  “Beyond Vietnam” contains many famously moving passages.  King, for example, cited “the cruel irony of watching Negro and white boys on TV screens as they kill and die together for a nation that has been unable to seat them together in the same schools” and would not allow them to live “on the same block in Chicago.”  And he reflected on the incongruity of young Black men being sent “eight thousand miles away to guarantee liberties in Southeast Asia which they had not found in southwest Georgia and East Harlem.”