“The environment has long been a silent casualty of war and armed conflict. From the contamination of land and the destruction of forests to the plunder of natural resources and the collapse of management systems, the environmental consequences of war are often widespread and devastating.” -Ban Ki-moon, UN secretary general 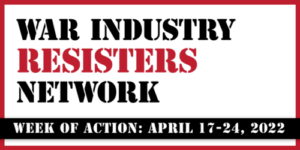 War is Not Green!

The U.S. Military is poisoning our planet: the Air we breathe, the Water we drink, our Soil for food.

No Reporting = No Accountability

The Department of Defense (DOD) has over 800 bases and over 4,775 defense sites in the world. DOD owns 8.8 million acres in the U.S. alone with at least one base in each state.

For decades the U.S. military has contaminated the air, soil, and water worldwide, including in the states, by burning contaminants or dumping them in the ocean and then hiding or simply not reporting major pollution. Besides fossil fuels some of the contaminants are: bacteria, pathogens, metals such as lead and mercury, and PFAS flamethrowers.

These events are in conjunction with The War Industry Resisters Network actions planned nationwide during Earth Day Week.

Check out all the folks taking action nationwide during the Week of Action! (April 17th-24th).  Join a group near you! 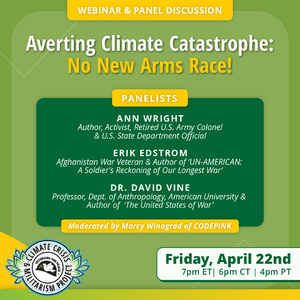 Every year on April 22nd, people celebrate and honor Earth Day through neighborhood clean-ups, community festivals, and projects to educate the public about the need to reduce our carbon footprint. Veterans For Peace has honored Earth Day by discussing how militarism impacts the environment. We hope to spread the message about the environmental costs of war, a topic that isn’t often discussed when leaders debate climate change and enact environmental policies. Instead of working for a cleaner, cooler future, our tax dollars are being spent on human death and environmental destruction.

Register for the webinar here!

Clearly, there are no winners in the terrible war in Ukraine — except one: U.S. and British military contractors who will carry their increased profits all the way to the bank.

The result is $768,000,000,000. That’s $768 billion dollars. Democrats and Republicans in Congress just passed the most bloated military budget ever. That’s also $768 billion worth of new fossil fuel emissions to be created by the single biggest single source of carbon pollution on earth: the U.S. war machine.

The organizing for the new War Industry Resisters Network is full speed ahead.  We’ve had over a hundred folks join our organizing calls and over 500 join our previous webinar.  Join us as we continue to resist the dangerous war profiteering companies!

Check out all the folks taking action during the Week of Action! (April 17th-24th).  Join a group near you!

Rise Up Times! Media for Justice and Peace