“…the politics of order and the politics of disturbance are more intricate than they might seem. Many injustices, from domestic abuse to torture and genocide, occur not from lack of order but under an unjust order.” 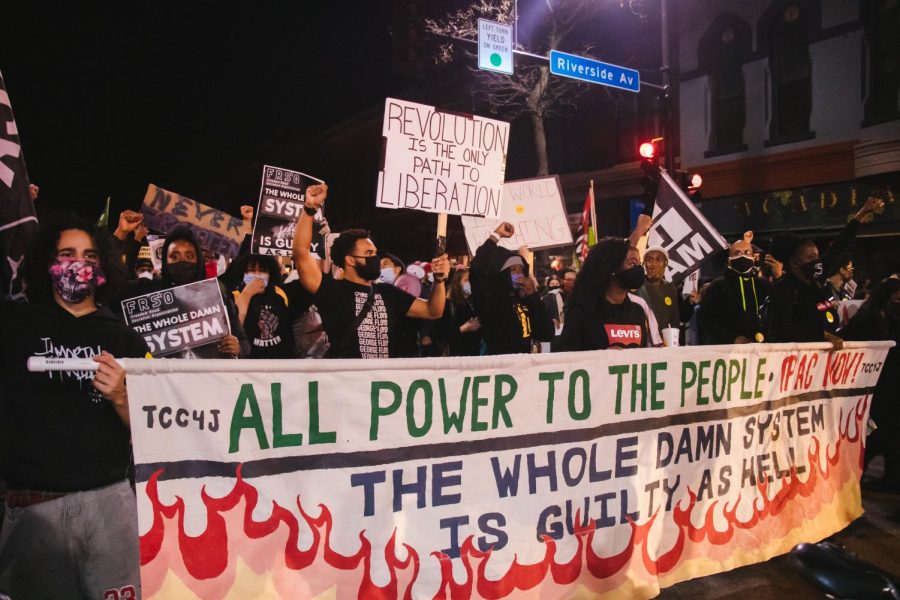 Protesters march on Cedar Ave. S. on Wednesday, Nov. 4. The rally was held to address a People’s Mandate requesting action be taken to end racism, COVID-19 and the recession no matter who wins this year’s presidential election. Photo: The Minnesota Daily

On November 4, 2020, following the presidential election, demonstrators in Minneapolis marched to and blocked traffic on highway I94 in an All Power to the People demonstration, demanding policy and cultural changes such as an end to oppression of people of color and climate justice. The demonstrators were “kettled” by law enforcement. That means they were encircled, trapped and not allowed to leave the highway, where they were “ticketed” as a form of arrest. 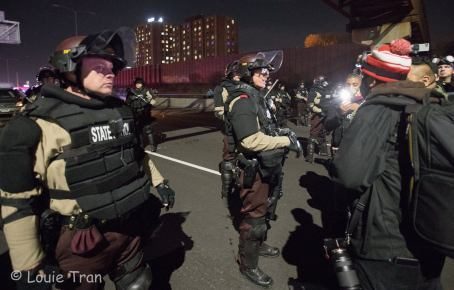 Daniel Berrigan said, “Our apologies, good friends, for the fracture of good order, for the burning of paper instead of children…” in Vietnam after the Catonsville Nine protest. He goes on to ask, “How many must die before our voices are heard, how many must be tortured, dislocated, starved, maddened? When, at what point, will you say no to war?” Whether in war abroad or war at home, human rights in this day and age so often do not apply, especially for people of color.

So, apologies, good friends, for the “fracture of good order” on Interstate 94. Stop. Look. Listen. Something here needs your attention. Something here needs to be changed. Practicing nonviolent protest in the exercise of freedom of speech is in direct contrast to the belief that military might, whether it be the police and law enforcement or the bombs raining in Yemen, is the way to solve anything. Violence begets violence.

On January 6, 2021, violent and armed protesters who stormed the Capitol in Washington D.C. were egged on by an angry then President Trump who equated strength with military might and violence while trying to convince his followers that the presidency was stolen from him by fraud. The war abroad, the war at home. Neither will be solved with military might.

Roland Bleiker talks about the need for order in society but also about how law and order can be unjust. And that at times dissent in the form of disruption of order is necessary for a democracy to flourish.(1)

Bleiker recognizes the need for order in all societies, noting that:

“Order is a necessary pre-condition for democracy, the rule of law, the provision of human rights, and human civilization itself.”

Having said that, he also recognizes that

“…the politics of order and the politics of disturbance are more intricate than they might seem. Many injustices, from domestic abuse to torture and genocide, occur not from lack of order but under an unjust order.”

Bleiker uses Nazi Germany as an example, a regime that had a “meticulous infatuation with order,” yet called for and acted upon promoting the genocide of whole groups of people who did not meet their idea of racial purity. How far away are we from that same idea?

Dissent is an essential component of democracy. Bleiker says:

“A functioning democratic system, one that listens to and debates grievances and heeds dissident voices, is far more likely to generate political outcomes capable of avoiding such disruptive and often violent scenarios.”

Drop the charges. Instead listen to the dissident voices, the grievances and the pain, and change what causes them. I’d rather see dancing in the streets.

Donate
By Rise Up TimesPublished On: July 26th, 20210 Comments