Matt Taibbi: For What Are America’s Wealthy Thankful? A Worsening Culture War

When leaders run out of unifying myths, division is the last currency. Why this Thanksgiving, America is a “death cult” versus “radical socialists”

No seriously…how *do* you deprogram 75 million people? Where do you start? Fox? Facebook? We have to start thinking in terms of post-WWII Germany or Japan. Or the failures of Reconstruction in the South.

You have to read the full thread to grasp the argument, a greatest hits collection of DNC talking points. Conservatives, Atkins writes, have no beliefs, being a “belligerent death cult against reality and basic decency.” There’s no reason to listen to them, since the “only actual policy debates” are “happening within the dem coalition between left and center-left.” He had over 61,000 likes last I checked.

I can understand why the Squad doesn’t want me in the Senate – because I’m going to bury your agenda. You’re a bunch of Socialists. You would transform America and make it Venezuela. I’m gonna stand in your way. I’m not going anywhere! 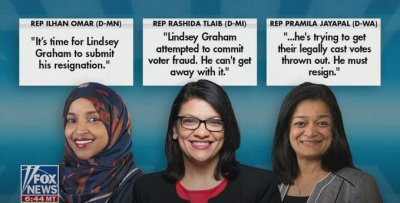 From the “vast right-wing conspiracy” through the “basket of deplorables” to now, the Democratic message increasingly focuses on the illegitimacy of the ordinary conservative voter’s opinion: ignorant, conspiratorial, and racist, so terrible that the only hope is mass-reprogramming by educated betters.

On the other hand, Republicans from Goldwater to Trump have warned that coalitions of “marauders” from the inner cities and “bad hombres” from across the border are plotting to use socialist politics to seize the hard-earned treasure of the small-town voter, with the aid of elitist traitors in the Democratic Party.

Spool these ideas endlessly and you get culture war. Any thought that it might abate once Trump left the scene looks naive now. The pre-election warnings from the right about roving bands of Pelosi-coddled Antifa troops looking to “attack your homes” haven’t subsided, while the line that Trump voters are not a political group but a stupidity death-cult is no longer hot take, but a mandatory element of mainstream press analyses.

This language has been picking up for years, from Vanity Fair’s “Cult of Trump” to endless Washington Post and New York Times ruminations on the theme, all wondering how humans supporting Trump could also hold down jobs or take out the trash by themselves. Every tale about science-denying Trumpists gone off the deep end in the manner of religious loons is boosted. When an E.R. nurse went on CNN to tell tales of Biden-haters going to their Covid-choked deaths gasping, “It isn’t real!”, her story was circulated everywhere, retweeted by multiple Senators and a Pulitzer winner.

A rare follow-up by Wired suggested these and other similar tales were apocryphal, which ought to have been a relief. However, just as news that Robert Mueller might not discover the president to be a secret agent was deemed a “disappointment,” press and politicians alike seem reluctant to let go of legends of Middle America as one great sea of mass insanity. In the same way, some in the GOP can’t let go of the dream of an election stolen in the dark night of our Venezuela-style city governments.

As a result, we’ve seen story after story of late about skyrocketing gun sales, with frequent reminders that it’s not just frustrated white dudes tooling up now. Even “women, minorities, and politically liberal buyers” are being forced to “contemplate something outside their universe,” is how one gun dealer recently put it to NBC.

Though the oft-predicted breakout of Yugoslavia-style sectarian violence hasn’t happened yet, it’s not for want of trying on the part of both politicians and the bigger media organizations, which couldn’t get enough of the stories of “on edge” and “nervous” citizens boarding up storefronts on Election Night. They keep playing up these tensions as click-generating theater, not caring about the consequences of wishing actual sectarian battle into existence.

This is what happens when the very wealthy stop having a stake in the outcome of a country’s future. Having long ago stopped investing in ameliorative programs to keep cities and small towns alive, they stop bothering with unifying national legends, too, letting long-simmering divisions rise.

Eight years ago, at the height of anger toward Wall Street, the American Conservative wrote about the “revolt of the rich,” saying, “Our plutocracy now lives like the British in colonial India: in the place and ruling it, but not of it.” They pointed out that in both world wars, the Harvard man and the New York socialite alike “knew the weight of an army pack.” By the 21st century, war became a job for lower-class suckers, with soldiers being one of many groups targeted by predatory lending in the crash era. Conflicts in places like Afghanistan drag on forever because the children of Important People mostly don’t serve. We have very wealthy people, but walled off in an archipelago of tax and criminal justice loopholes that give them more common statehood with other plutocrats in Europe and Asia than with other Americans.

Right around the same time that article was being published, political movements on both the left and the right were beginning to wake up to the idea that they’d been focusing their anger in the wrong places. Each articulated a theory of political abandonment. The Occupy movement described their battle as being between the 99% and the 1%, while the Tea Partiers, for all their eccentricities — I was pretty harsh about them once upon a time — were at least coming to the realization that the Republican Party leaders had long been lying to them about things like spending. These movements respectively set the stage for Bernie Sanders and Trump, who both described politics as a fight between a broad mean of betrayed constituents and that archipelago of rich villains.

Those movements failed, for different reasons, and we’re now back to corporate-sponsored tales of half against half. What’s always forgotten is who’s paying for these messages. We have two donor-fattened parties that across decades of incompetence have each run out of convincing pitches for how to improve the lives of ordinary people. So they’ve settled into a new propaganda line that blames voters for their problems, with each party directing its base to demonize the other’s followers. Essentially, in the wake of Trump, the political class is accepting the inevitability of culture war, and urging it on, as something preferable to populist revolt.