The older I get the better I know that the secret of my going on
Is when the reins are in the hands of the young, who dare to run against the storm

Struggling myself don’t mean a whole lot, I’ve come to realize
That teaching others to stand up and fight is the only way my struggle survives

I’m a woman who speaks in a voice and I must be heard
At times I can be quite difficult, I’ll bow to no man’s word 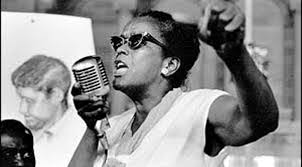 Donate
By Rise Up TimesPublished On: November 1st, 2020Comments Off on Sweet Honey in the Rock: Ella’s Song