“…things like having the Secretary of State make a campaign speech from Jerusalem, where they’re engaged on state business, or the first lady stumping with the White House Rose Garden as backdrop, or the head of Homeland Security performing a naturalization ceremony, with Trump looking on, as part of the convention—all patently illegal and unethical.”

After the spectacle of a Democratic National Convention featuring more Republicans than Latinos, Americans got a Republican Convention featuring—to pick just one thing— gleeful violations of the Hatch Act. That’s the law that prohibits federal employees from taking part in partisan political activities. So, things like having the Secretary of State make a campaign speech from Jerusalem, where they’re engaged on state business, or the first lady stumping with the White House Rose Garden as backdrop, or the head of Homeland Security performing a naturalization ceremony, with Trump looking on, as part of the convention—all patently illegal and unethical. 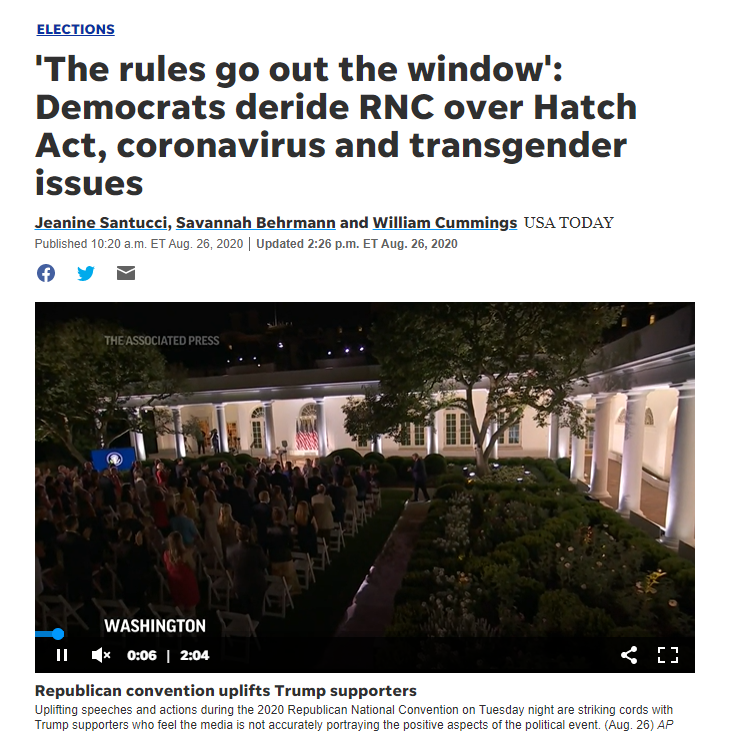 USA Today (8/26/20) framed the Trump campaign’s flagrant violation of laws against the use of the Executive Branch for political purposes as a partisan disagreement.

But besides framing it as “many Democrats were outraged,” as did USA Today (8/26/20), elite media normalized the behavior with passivity, like the New York Times headline (8/26/20), pointed out by Eric Boehlert in his newsletter Press Run (8/27/20), “At RNC, Trump Uses Tools of Presidency in Aim to Broaden Appeal.”

The same press corps for whom this is just “oh there he goes, breaking with precedent again,” had a very different response, Boehlert reminds, when Al Gore was accused of violating the Hatch Act for making campaign fundraising phone calls from his White House office as vice president. The New York Times editorial page (3/5/97) called for an independent counsel to launch a major investigation; the House spent $7 million investigating, and the Senate held three months of hearings.

But Trump, he’s just “using the tools of presidency” (or he “leverages powers of office,” as an updated version of the headline read). 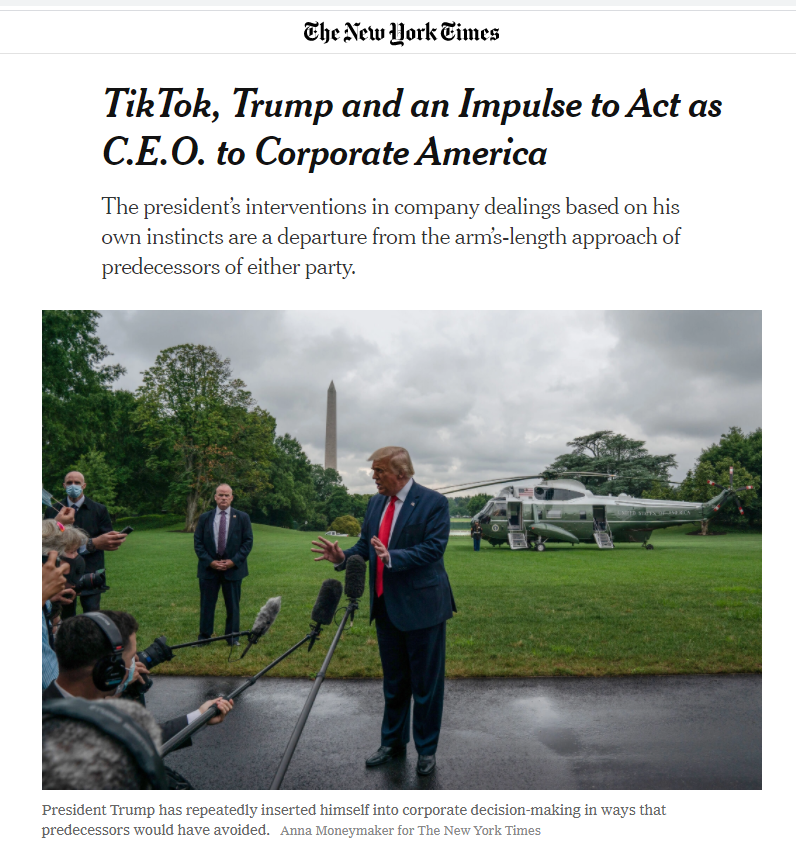 For the New York Times (8/3/20), Trump threatening to ban a company based on the nationality of its owners, and then demanding a cut of any resulting forced sale, is simply an “impulse to act as CEO” that his “predecessors would have avoided.”

It evokes another recent Times headline, when Trump was threatening to ban the app TikTok, explicitly because of its “Chinese ownership”—or else, he said, it could get taken over by Microsoft, in which case the US Treasury should get a cut since it was his threat that made the sale possible? The BBC, with restraint, called that “almost Mafia-like behavior,” but, as Dan Froomkin of Press Watch spotlighted (Twitter, 8/4/20), the New York Times (8/3/20) described it in a headline as Trump’s “Impulse to Act as CEO to Corporate America”—his “interventions in company dealings based on his own instincts” being, you guessed it, “a departure” from the “approach of predecessors.”

Elite journalists are no doubt clearing their shelves for the awards they expect to win for the fearless and high-minded excoriations of the Trump presidency they will write…when it’s over. Too bad they can’t muster up that courage while it matters.

Janine Jackson is FAIR’s program director and producer/host of FAIR’s syndicated weekly radio show CounterSpin. She contributes frequently to FAIR’s newsletter Extra!, and co-edited The FAIR Reader: An Extra! Review of Press and Politics in the ’90s (Westview Press). She has appeared on ABC‘s Nightline and CNN Headline News, among other outlets, and has testified to the Senate Communications Subcommittee on budget reauthorization for the Corporation for Public Broadcasting.
+++

Donate
By Rise Up TimesPublished On: August 30th, 2020Comments Off on Press Normalizes Trump’s Lawlessness as Use of ‘Tools of Presidency’ to ‘Broaden Appeal’