Just as we oppose the use of the U.S. military in other countries, we also reject the violence enacted by militarized personnel responding to protest in the Twin Cities and the nation.

“Effective war propaganda has caused Americans to either forget or apparently have a hard time understanding that war is itself a systemic evil that once unleashed, cannot be easily or neatly constrained. What goes around, comes around. When a country decides to open Pandora’s box in its quest for dominance as an Empire, when its people come to see war as their answer, glorifying militaristic violence, normalizing the killing of millions of foreign people in the process, that violence inevitably ‘blows back’ on its own domestic population…You cannot compartmentalize a love of military policing of the world from domestic policing within the U.S.

Not only (as MLK Jr. said) is the U.S. government the greatest purveyor of violence on the rest of the world, but it ends up also being the greatest purveyor of violence on its own citizens. But I hardly see anyone understanding that there is a blowback effect of our perpetual, unending wars that have killed millions of poor foreign civilians and its boomeranging back into the growing police and mass shooter violence killing poor U.S. civilians. Despite its disparaging treatment of American law enforcement, the mainstream media just continues to praise and extol US military ‘warriors.’” ~ Coleen Rowley, antiwar activist and member of Women Against Military Madness, June 2020

“While the U.S. war on the black population at home is now exposed for all of America—and the world—to see, the victims of U.S. wars abroad continue to be hidden…For too long, we have let cynical politicians and business leaders divide and rule us, funding police and the Pentagon over real human needs, pitting us against each other at home and leading us off to wars against our neighbors abroad…Just as we are exposing the rot in U.S. police forces and calling for defunding the police, so we must expose the rot in U.S. foreign policy and call for defunding the Pentagon…

“As we chant ‘Black Lives Matter,’ we should include the lives of black and brown people dying every day from U.S. sanctions in Venezuela, the lives of black and brown people being blown up by U.S. bombs in Yemen and Afghanistan, the lives of people of color in Palestine who are tear-gassed, beaten and shot with Israeli weapons funded by U.S. taxpayers. We must be ready to show solidarity with people defending themselves against U.S.-sponsored violence whether in Minneapolis, New York, and Los Angeles, or Afghanistan, Gaza, and Iran.” ~ Medea Benjamin of Code Pink and Nicolas J.S. Davies, author of Blood on Our Hands: the American Invasion and Destruction of Iraq. Common Dreams, June 9, 2020

“We are clear: It is a moral and political contradiction to advocate for a kinder and gentler police force in the belly of the Empire while it is unleashing murderous violence around the world against Africans and other colonized people. We will continue making the connections and organizing…” ~ Black Alliance for Peace, which is conducting “U.S. Out of Africa Campaign” and “The 2020 Accountability Pledge demanding all 2020 candidates take a position on war, militarism, and repression.” blackalliancecampaign.com

Note: Camp Ripley (Little Falls, MN) reported on June 20 that the Minnesota National Guard, joined by soldiers from Illinois and Iowa, after COVID-19 preparations, is now deploying to the Horn of Africa where it will “conduct security operations, force protection, and provide security force assistance in support of Operation Enduring Freedom.” h/t to Robin Hensel (“Minnesota Guardsmen honored with socially-distanced send-off and steak dinner.” June 20, 2020 tinyurl.com/y7hasur9)

WAMM responds to the murder of George Floyd by Minneapolis Police

Women Against Military Madness (WAMM) mourns with our Twin Cities community the murder of George Floyd. We condemn all forms of police brutality, and particularly systemic police violence against Black members of our community. We join the millions of people who are mourning the murder by officers of the Minneapolis Police Department (MPD) of Mr. Floyd on May 25, 2020. We commit ourselves to ensuring that those responsible for Mr. Floyd’s death will be held accountable, and to creating an environment in which something like this does not happen again. We will actively join with our community to create a more just world.

Just as we oppose the use of the U.S. military in other countries, we also reject the violence enacted by militarized personnel responding to protest in the Twin Cities and the nation. George Floyd’s unjust murder, preceded by centuries of oppression and violence against Black people, has sparked outrage and grief, as has the brute force with which the Minneapolis police, with the support of state troopers and National Guard, have responded.

We decry the use of wartime tactics, alongside President Trump’s encouragement of a military-style crackdown. These tactics including tear gas and other chemicals, stun grenades and flashbangs; rubber bullets and beanbag projectiles lined with lead; low-flying helicopters, and surveillance by Predator drones—all used on protesters exercising their First Amendment rights. 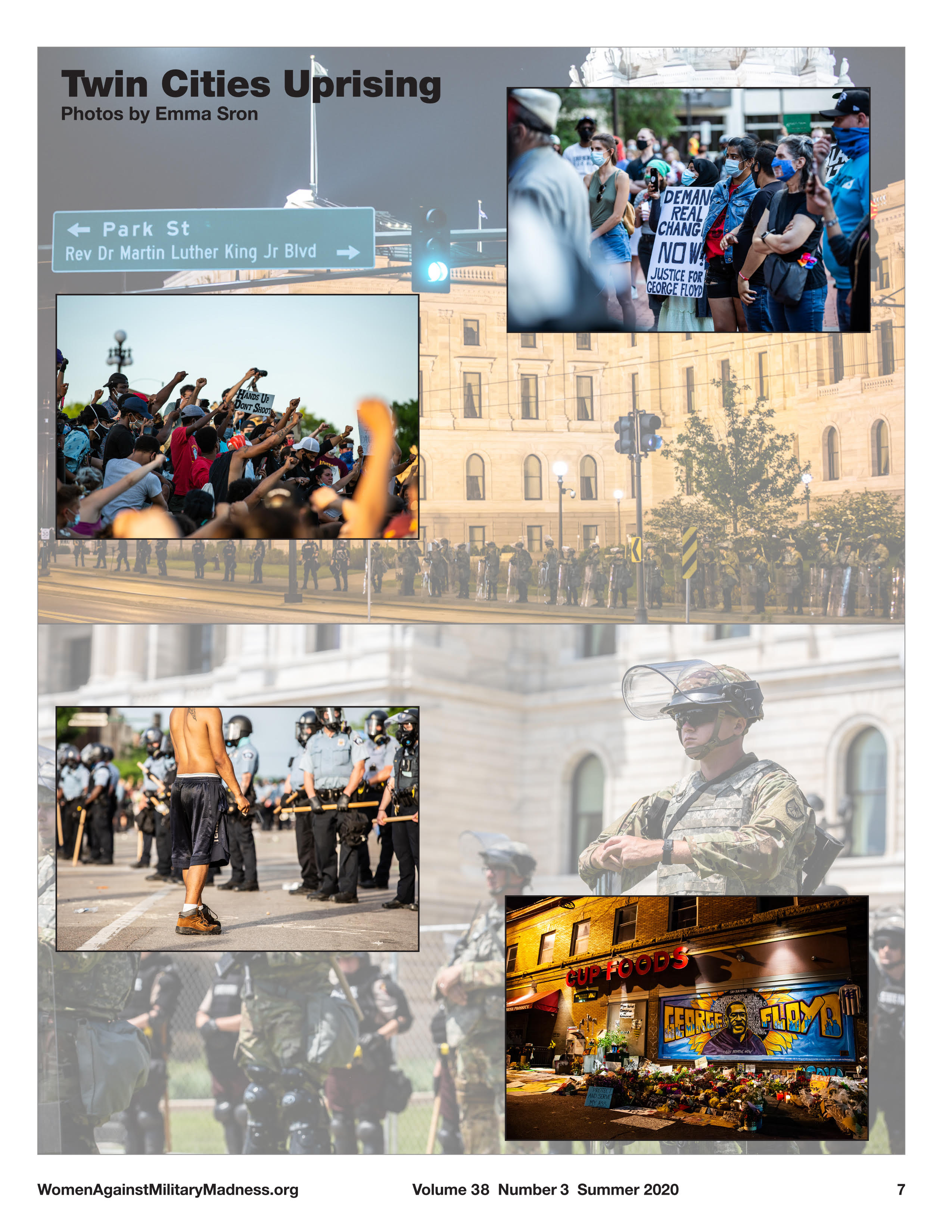 The government claims that the police and state troopers are here to protect our Twin Cities community. Instead, the use of police and militarized forces has served to incite violence and deepen the long-standing wounds of our nation. At WAMM, we understand that violence begets violence. Our communities are hurting, and the presence of weaponized law enforcement has heightened our fear and hurt.

We are inspired by the outpouring of community action in response to this violence – from food and medical donations to neighborhood watches and clean-up crews – that demonstrate our belief that communities can come together peacefully to advance the common good. The massive and sustained demonstrations in our city, country, and around the world, finally led to the arrest and charging of the four officers responsible for the murder of George Floyd and the Minneapolis Police Department’s loss of contracts with Minneapolis Public Schools, the Minneapolis Parks and Recreation Board, the University of Minnesota, the Walker Art Center, and the Minneapolis Institute of Arts. We must continue to organize and mobilize for a just solution and systematic change.

From WAMM’s Core Values: “A militaristic society relies on violence and repression to accomplish its objectives. Under the pretext of ‘national service,’ the military teaches violence and killing. WAMM encourages service to society in an enterprise that enhances life, advances the common good, encourages cooperation, and promotes equity.”

Donate
By Rise Up TimesPublished On: July 27th, 2020Comments Off on We Reject War on Foreign Soil As We Reject Police Violence Here!