When the U.S. military chooses to publicize its actions abroad, the videos we get of drone strikes usually include little more than a sudden green haze demonstrating the might of American weaponry. We don’t hear the last cries of the unsuspecting victims. 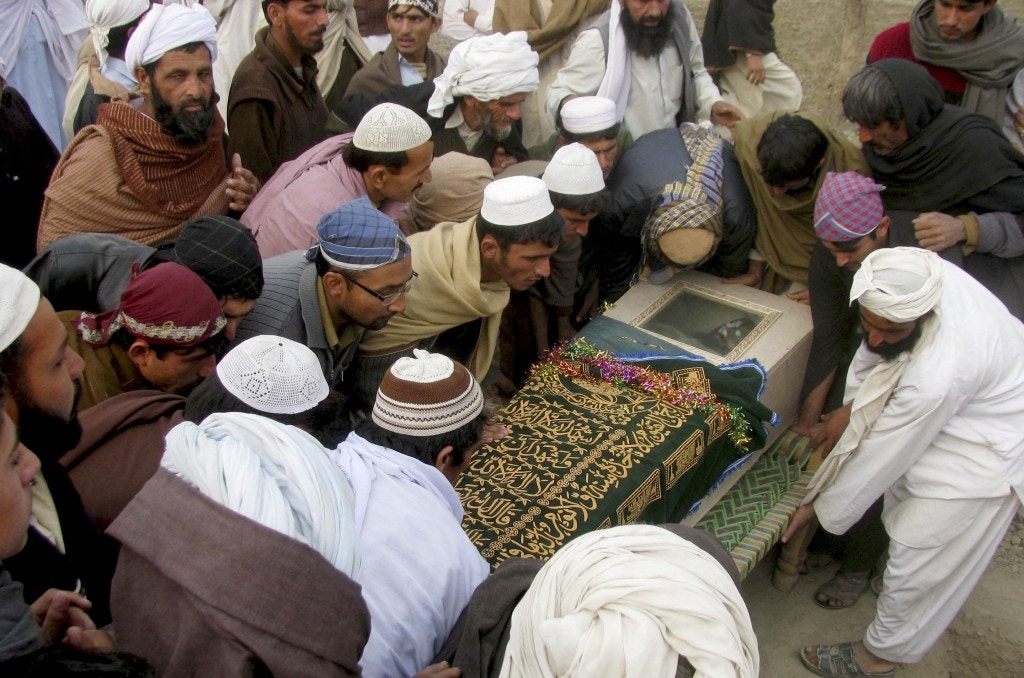 Pakistani villagers carry the shrouded casket of a person, reportedly killed by a U.S. drone attack in the tribal area of Mir Ali along the Afghanistan border, during his funeral in Bannu, Pakistan, on Dec. 29, 2010.   Photo: Ijaz Muhammad/AP

GEORGE FLOYD WASN’T the first victim of state violence in the United States; law enforcement officers have killed countless people who were never properly memorialized and for whom justice was never sought. Part of what made Floyd’s murder especially cruel — setting off what may be the largest protest movement in U.S. history — is that it was a public execution that lasted for 8 minutes and 46 seconds and was broadcast online. Floyd gave a face, a story, and a video to the issue of state violence situated in white supremacy. As civil rights attorney David Lane has written, “Police brutality hasn’t increased. Videoing brutal cops has increased and white America is finally seeing it.”

Now that Floyd’s murder has forced a national conversation about policing within our country’s borders, it’s time the American public begins to reckon with the victims of our foreign policy abroad. Since waging the war on Iraq, how many Americans can name a single one of the approximately 200,000 civilian casualties of that war? Even when exposed to the gross images of torture at Abu Ghraib at the hands of members of the U.S. military, the victims’ faces remained blurred and their names unknown.

What if we knew the names, faces, and stories of the victims of Eddie Gallagher, the war criminal pardoned by President Donald Trump who, according to his colleagues, would be OK with “killing anybody that was moving” during his time in Iraq? Or the 30 pine nut farm workers in Afghanistan caught off guard by a U.S. drone in 2019? When the U.S. military chooses to publicize its actions abroad, the videos we get of drone strikes usually include little more than a sudden green haze demonstrating the might of American weaponry. We don’t hear the last cries of the unsuspecting victims. We don’t see them hold each other tight, hoping they’ll somehow be missed. We see our machinery, but never their humanity. They don’t even become hashtags: just hidden casualties.

For years, researchers have logged the details of America’s opaque drone war, a fulcrum of the war on terror that is a signature part of President Barack Obama’s legacy, now continued by Trump. The Bureau of Investigative Journalism estimates that up to 17,000 people have been killed by U.S. drone strikes in Pakistan, Afghanistan, Yemen, and Somalia, while Airwars has tracked reports of nearly 30,000 civilians being killed by the U.S.-led coalition against ISIS in Iraq and Syria. The Intercept in 2015 published a secret cache of U.S. government documents detailing the inner workings of the drone program, and a New York Times investigation in 2017 found that civilians were killed at a rate 31 times higher than that acknowledged by the anti-ISIS coalition.

DESPITE THESE EFFORTS, there has been an overall paucity in news coverage of the drone war, and specifically of the stories of those killed by drone operators pushing buttons from thousands of miles away: a combination of public apathy and efforts by the federal government to shield the drone program from public view. It was only three days after Obama’s inauguration in 2009, as America projected its best image of progress and hope, that a CIA drone murdered nine civilians having dinner in Pakistan. Faheem Qureshi, a teenager who barely survived the attack, told The Guardian at the time, “I had all the hopes and potential and now I am doing nothing.” Faheem has never received an explanation for why his family was killed by an American drone, and the vast majority of the American public has likely never even heard his story.

It was not until 2013 that Congress heard testimony from a family impacted by the drone war. Nabila Rehman, a sweet 9-year-old girl, brought members of Congress to tears as she held up her hand-drawn images of what the drone strike that killed her mother in Pakistan looked like. Her 13-year-old brother, Zubair, shouted, “Not a militant, but my mother,” feeling the extra burden of having to impress upon this nation that his mother meant something and did absolutely nothing that warranted her cruel death. It was a moment, that if broadcast to every American living room, could potentially activate people of conscience to demand greater accountability for our military actions abroad as we fight the militarization of our police here at home.

We need to demand greater accountability for our military actions abroad as we fight the militarization of our police here at home.

Trump, after inheriting the drone program from Obama, has made this war both more ambitious and more ambiguous by simultaneously expanding it further and hiding it better. The U.S. military launched 2,243 drone strikes in Trump’s first two years in office, compared to Obama’s 1,878 strikes over his entire presidency. Trump has also made this war even more secretive, issuing an executive order to no longer require the release of annual summaries of U.S. drone strikes and casualties, even as the Navy has expanded its mysterious drone technology. There has not been a single testimony in front of Congress by the families of drone victims since Trump has taken office.

We cannot make our government accountable for the victims of state violence if there is no transparency into its actions. We also cannot generate the moral outrage necessary to usher in change if we don’t consider the humanity of our victims. Dr. Martin Luther King Jr., who lost much of his popularity for connecting America’s conduct in Vietnam to its conduct at home, challenged us to think about the intoxicating power that yielded the government’s false sense of invincibility as it used weapons of war at home and abroad on innocent civilians, as well as the dangerous apathy of much of the American public that didn’t seem to grasp the magnitude of the war. In a world of no social media, he sought to convey the tragedy of the senseless murder of “some one million Vietnamese children … incinerated by napalm” while some American soldiers “in unrestrained hatred shoot the wounded enemy as they lie on the ground.” He called it a war that had mutilated our conscience, and insisted that “these casualties are enough to cause all men to rise up with righteous indignation.”

What the story of George Floyd did, no number of un-videotaped police killings could have done. We watched and heard him cry for his mother under the knee of officer Derek Chauvin. It drove the masses to the streets in righteous indignation, even amid a life-altering pandemic. It’s time we also start hearing the cries of Nabila Rehman for her mother under the thrust of our bombs — and insist that those like her are not murdered in silence, and without accountability.

Correction: July 22, 2020
Due to an editing error, a previous version of this article stated that Airwars has tracked 3,000 civilian casualties of the U.S.-led coalition against ISIS in Iraq and Syria. The group has actually tracked nearly 30,000 civilian deaths.

Donate
By Rise Up TimesPublished On: July 22nd, 2020Comments Off on America’s Problem With Policing Doesn’t Stop at the U.S. Border