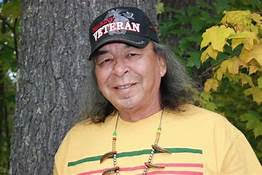 Not everyone born on an Indian reservation who was sent to reform school and Vietnam ends up a renown, international writer, but Jim Northrup did.

Born on the Minnesota Fond du Lac Indian Reservation twenty miles west of Duluth, he was sent to a federal boarding school three-hundred miles away from his family when was he was six. There he was taught not to speak the Ojibwa language and learned how to fight. He had to. He was one of the smallest kids in school and lost a lot more fights than he won.

It wasn’t long before he took the path of a lippy street-fighter that eventually led to the Red Wing State Training School for Boys. When memories of his writer grandfather resurfaced, he decided to honor those memories by contributing to the reform school newspaper. He wrote with insight and humor. One time he pranked readers by asking ten questions on the front page and telling them the answers were on the seventh page of a six-page newspaper. He recalled getting a kick out of that idea during an interview.

He also remembered stories he heard around campfires on the Rez from elders about poison gas during WW1 or tales relatives told about fighting in Korea and WW2. Members of his tribe who risked death in battle were greatly respected so he signed-up to be a Marine when he was eighteen.

He survived the Vietnam War with his body intact, but the post-traumatic stress disorder (PTSD) he brought home stuck with him. He sometimes referred to PTSD as “party till somebody dies.” Talking with other Vietnam Vets helped him sort things out and so did writing — especially poetry and short stories. “I could just write a poem, get it in the book and close the page on it.” he mentioned it an interview.

Excerpt from his poem “Shrinking Away” below:

Survived the war but
was having trouble
surviving the peace
Couldn’t sleep more than two hours
was scared to be without a gun
nightmares, daymares
guilt and remorse
wanted to stay drunk all the time
1966 and the VA said
Vietnam wasn’t a war

He returned to the Fond du Lac Indian Reservation after working  a variety of jobs and resumed writing while developing a reputation as a funny story-teller, birch bark basket maker, Jeopardy freak and political smart-ass. Regarded as a man who wore many headbands, he embraced other Anishinaabe traditions including wild rice gathering, maple syrup collecting and moose hunting. Between writing, he found gigs as a radio commentator, newspaper editor, stage hand or anything else he found interesting or necessary. At one point he was a tribal court lawyer and lay attorney.

His writing, which focused on conditions and changes occurring within the Indian community, grew more powerful and he became an influential Native American voice through his award winning syndicated column, books, interviews, poems, radio commentaries and performances. He was know in parts of Europe and beyond.

Despite his political edginess, PTSD and success as a writer, Northrup remained a warm, folksy man who continued to tell his stories in a straightforward and humorous way until his death. In 2016, wearing a Marine Veterans baseball cap he told an applauding audience at Lambeau Field in Green Bay he used writing sometimes as a to way to deal with combat trauma and referred to that writing process as “my brain taking a shit.”

Paiute poet Adrian C. Louis would later say “The main enemies of a warrior are the demons inside himself. Jim Northrup conquered most of those. He was a kind man, a good man, a traditional man, and my favorite Indian writer.”

Although Northrup didn’t call himself a pacifist, Artistic Director Ron Pelusu of the History Theater in St. Paul recently mentioned in an online chat he was “someone who seeks out peace.”

Northrup never achieved the luxury of continuous peace — at least not during his time on Earth. Yet he found direction, periods of solace and an understanding of himself in work, honoring the ways of his tribe and through an inside journey that inextricably connects the future to the past.

Rise Up Times needs your help to bring you timely articles and information about so many important current issues in these Rise Up Times. Subscribe to RiseUpTimes.org   Support independent media.

Views represented on Rise Up Times do not necessarily reflect the opinions of the editor.