“How shall we rise?”

I just watched again the interview on KSTP of Stephanie, the handicapped woman who lives in an apartment building in the area of the 5th precinct. In a moving statement in which she was crying as she describes how she watched the Office Depot and Dollar Tree and other stores at the shopping center at Nicollet and Lake looted and destroyed. She asks where is she going to shop now, where get food and other items. The very sympathetic white male KSTP reporter who was very moved by her testimony, said he understood her frustration.  What I can tell you is that it is more than frustration. It is trauma.

Yesterday morning (Friday, May 29th) I experienced a form of this trauma that threw me for the day and longer when I was awakened yesterday morning by a pounding on my door by a neighbor telling me that the Dollar Store on the corner of 10th St. and Lake was on fire. Evacuate!  Because I have a car I was able to drive away. When I went to the underground garage in my building, it was full of smoke and the fire alarms were going off, although they were not going off upstairs in the building.

I did leave and visited friends most of the day out of the area under siege. When I first went back to the area the Dollar Tree fire had been put out, but turning up Lake St. there was another building on fire between Elliot and Chicago just down the street from the Global Market with smoke and flames pouring out the top of the building. That is when I left the area and went to friends.

I realize I was somewhat traumatized after my experience yesterday. Then how much more is Stephanie traumatized. I need to emphasize the emotional impact by people who are affected. We are in a war zone. And I can’t help but think of people overseas who are being struck by drones and bombs in their communities from U.S. wars and the trauma they go through. We are experiencing a slice of similar trauma in our communities that are affected.

By the way, I do shop at the Office Depot and the Dollar Tree at Lake St. and Nicollet. Most of their employees are people of color, who have been very helpful and treated me well when I was in those stores. They are now out of jobs.

Those who are creating the violence are attacking many small businesses that are owned by people of color as well as large chains. Many many small businesses owned by people of color of many ethnicities are up and down Lake Street, which is the area of target for these outside agitators, who as Governor Walz says, “don’t care.” It is like a war zone. In St. Paul on Tuesday many minority-owned businesses were attacked as well.

Who are those creating the violence?  Are they white supremacists? Not official, but some have seen white men dressed in black breaking windows. That issue has therefore been raised, along with activity by drug cartels. The Southern Poverty Law Center has located white supremacist cults in the Twin Cities area. The fact that the agitators are now deliberately destroying art and monuments created to honor and by people of color tells a very different story from Justice for George.

I listened to the Governor’s press conferences, the pleas from government officials like Peggy Flanagan and Keith Ellison call for protesters who want peace and justice to honor the curfew and stay at home so those inciting violence and destroying the community can be held accountable, arrested, and stopped.

We also heard from community leaders of all faiths and community organizations making the same request, presenting a united community to at once both demand Justice for George and reform in racist policies and practices, and also to beg people to stay home to honor the curfew.

“How shall we rise?” as Maya Angelou says.

Below are several articles from PopularResistance.org. (Click on the titles to read the full articles.) 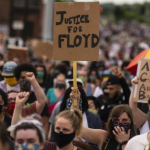 By Kevin Zeese, Popular Resistance. Minneapolis – The horrific killing of George Floyd in broad daylight with people watching and videotaping the incident while yelling at the police to stop is being described as a public lynching. It showed contempt for the lives of Black people by the police involved. It is one event of many that show police violence is a major national problem that people have seen too often, a police culture of violence. This is a pattern and practice of US policing especially in black and brown communities. While four officers have been fired over the murder, none have yet been arrested despite the overwhelming evidence that… -more- 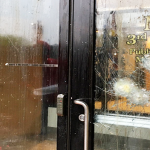 By Unicorn Riot. Protesters are continuing to gather outside the Minneapolis Police (MPD) 3rd Precinct building today after extended protests and clashes with police yesterday. The Twin Cities is still engulfed in mass outrage after MPD officer Derek Chauvin was filmed choking a black man named George Floyd to death in a disturbing video that went viral Monday night. On Wednesday, Minneapolis Mayor Jacob Frey called on Hennepin County Attorney Mike Freeman to file criminal charges against Officer Chauvin. Chauvin and three other officers involved in Floyd’s were fired on Tuesday. Such a quick firing of officers after a… -more- 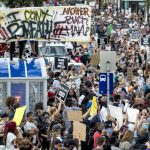 By Eddie Chuculate, Indian-Country Today.  The death of a handcuffed black man in police custody in Minneapolis has stoked anger and frustration among many Native people in the city. Leaders say relations with law enforcement have remained strained in more than 50 years since the American Indian Movement was founded here in response to alleged police brutality. The Metropolitan Urban Indian Directors Group, a collaborative of 30 Native organizations operating in the Twin Cities, released a scathing public letter Wednesday condemning George Floyd’s death, along with the “ongoing and systemic racist ideologies that… -more- 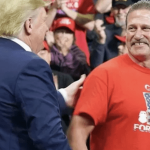 By Sarah Lazare, The Grayzone. The head of the Minneapolis Police Officer’s Federation has claimed that activists from the city’s Black Lives Matter movement comprises a “terrorist organization.” But a closer look at Lieutenant Bob Kroll’s record indicates that he is the one who poses a danger to the public, with a past marred in accusations of racist violence and attitudes, including charges from fellow police officers that he once wore a “white power” badge on his motorcycle jacket. Kroll’s outrageous statement about local civil rights protesters is part of a wider of pattern of incorporating war on terror-style… -more-

All articles are posts from PopularResistance.org, Daily Digest.

By Kim Kelly, The New Republic. posted on PopularResistance.org
May 30, 2020

Abolishing Police Unions Should Be Part Of The Broader Fight To Defund, Demilitarize, And Ultimately Dismantle The U.S. Police Force.

When Derek Chauvin of the Minneapolis Police Department killed 46-year-old George Floyd in cold blood last week, he showed the world exactly what kind of man he is. Chauvin has been cited multiple times for using excessive force on the job; he has been involved in at least two other police shootings, including that of Ira Latrell Toles, who is Black, in 2008. Chauvin has repeatedly abused his power, privilege, and authority to menace and terrorize—and he’s now been shown killing a human being on camera. Even so, he remains free to cower in his house and order delivery while demonstrators protest outside. And thanks to the tangled auspices of union affiliation, he’s also someone who technically counts as my “union brother.”

donate today
which I had the means to do with a car.
Donate
By Rise Up TimesPublished On: May 30th, 2020Comments Off on Justice for George Day 5 and more…