Why do Democratic voters think Biden is the more electable candidate, even if they like Sanders’ policy positions better? Why, if in head-to-head polling—our best available data on who is “electable”—Sanders has consistently done as well if not better than Biden over the months, have Democrats been convinced to vote against their own preferences?

Just a few weeks ago, early Bernie Sanders primary victories had media scrambling to turn winning into losing (FAIR.org, 2/24/20) and to find ways to discredit his rise (FAIR.org, 2/28/20, 3/6/20; Slate, 3/6/20). With a sudden turnaround in the race after Super Tuesday that finds Joe Biden in the lead both in polls and delegates, media have been quick to spin the reversal as a rejection of progressive politics.

the losses of Sen. Bernie Sanders (I-Vt.) this week with demographic groups and in states he won in 2016 are prompting questions about whether there ever was as much support for his revolutionary politics as some previously believed….

Michigan’s white working-class voters — many of them men — backing Sanders in 2016 gave the impression that these voters might be more liberal politically on labor issues than they actually were. But in backing Biden on Tuesday, these voters communicated that if given a chance, they are more likely to support the centrist politics of the former vice president than the revolutionary worldview of a democratic socialist in Trump’s America. 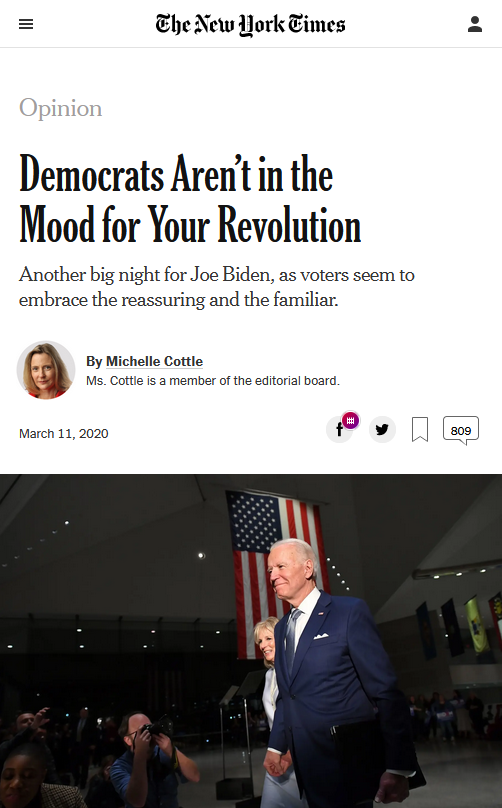 New York Times editorial board member Michelle Cottle’s column (3/11/20) was headlined “Democrats Aren’t in the Mood for Your Revolution”:

While the argument that a vote for Biden is a rejection of Sanders’ worldview is plausible on its face, it’s simply not supported by the facts. As every pundit knows, votes are a very blunt instrument for communication of policy preferences; a more accurate instrument would be a poll that actually asks them for those preferences. And in fact, we have lots of those—including exit polls from the primaries that asked about the signature difference between Sanders and Biden: “a government plan for all or private health insurance.”

In Michigan, where voters backed Biden over Sanders 53% to 36%, exit polls showed those same voters picked the government plan over private health insurance by a remarkable 57% to 39%. In Texas, which also handed more delegates to Biden, voters supported a government plan by even more (64% to 33%), while even in conservative South Carolina, where Biden received more than twice as many votes as Sanders, private insurance still lost out (49% to 46%).  (Note that the polling question used the “government vs. private” formula promoted by the insurance industry—FAIR.org, 7/1/19—rather than the more neutral “public vs. private” or “government vs. corporate.”)

Some pundits acknowledged the polls, but still wouldn’t change their conclusions. The Washington Post‘s Dana Milbank (3/3/20) looked at exit polls, but instead of telling readers the numbers, offered his own interpretation of them:

Super Tuesday revealed a party still divided by ideology and demographics. Democrats were split on Medicare for All. As usual, Sanders did well among the very liberal, Biden among moderates. The young voted by a lopsided margin for Sanders, while older voters turned out for Biden.

Those divisions won’t disappear anytime soon, which is all the more reason for Democrats to focus on the one thing they all agree on: beating Trump. The voters just made clear they believe Biden is the one to do that. 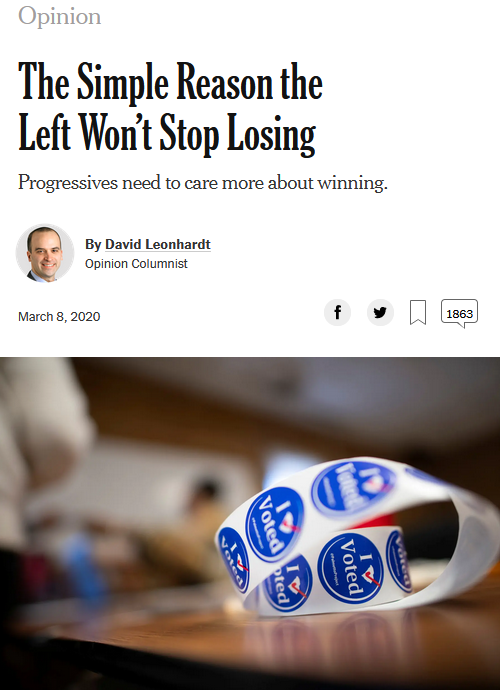 The New York Times‘ David Leonhardt (3/8/20) took an ostensibly more charitable approach, offering advice to progressives under the headline, “The Simple Reason the Left Won’t Stop Losing.” While admitting that most Democrats identify as liberal and support Medicare for All, Leonhardt’s takeaway from Super Tuesday was that “left-wing movements…have often prioritized purity over victory”:

Their answer to almost every question of political strategy is to insist that Americans are a profoundly progressive people who haven’t yet been inspired to vote the way they think. The way to win, these progressives claim, is to go left, always.

He admitted that progressive policy positions are “often closer to the views of most Democratic voters than the moderate position is,” but argued that since “many Democrats spurn the progressive candidate,” the solution must be for progressives to “break with orthodoxy.”

What would this look like? Leonhardt suggested some possibilities, including a combination of “economic progressivism and cultural moderation,” “a slowdown of future immigration,” “announcing that fracking and nuclear energy are crucial to fighting climate change,” and “finding more progressive candidates who hunt or talk about their relationship with Jesus Christ and have some related policy positions.”

“Cultural moderation”—also known as throwing the base under the bus—is beloved by media wonks (see, e.g., FAIR.org, 6/20/17, 11/7/19), but remarkably immune to logic. The idea is generally that by moving to the right on social and identity issues, you regain crucial swing voters. But looking at the data many of these arguments cite, the obvious strategy for a Democratic majority is to embrace (as Sanders does) the economically progressive positions that are appealing to many cultural conservatives—rather than backpedaling on the protection of rights and identities that are crucial to the party’s base. (Likewise, the Republican path to victory is to emphasize social issues without backing away from the conservative economic positions that are dear to its core voters—not to mention funders.)

Little of Leonhardt’s specifics jibe with polling. Fracking is increasingly unpopular among the public, but especially among Democrats, who according to a recent poll oppose it 63% to 19% (HuffPost, 9/4/19). And the reference to hunting is particularly odd, given that Sanders has come under fire from his opponents for his history of being more pro-gun than most progressives, as a representative of a state with a strong hunting tradition. 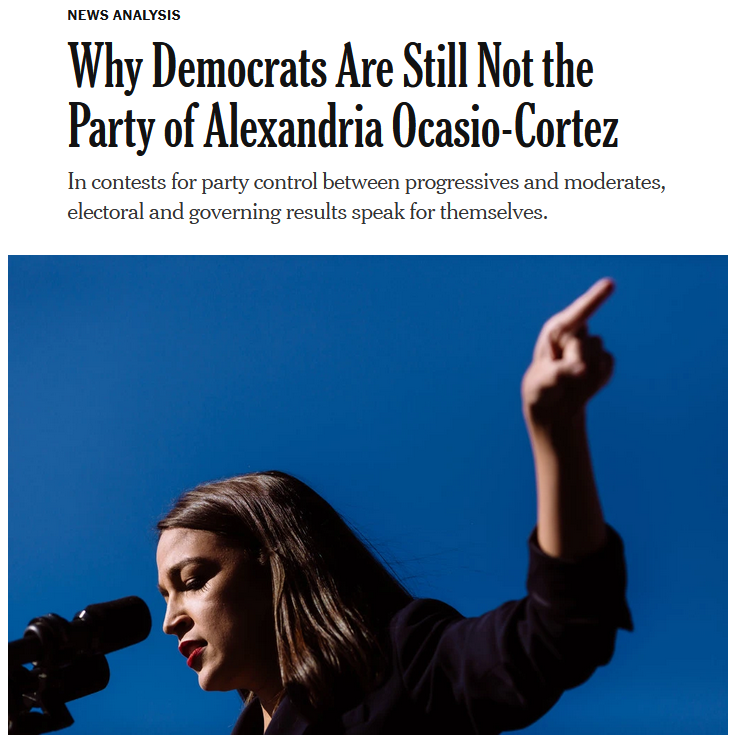 The New York Times‘ Jennifer Steinhauer (3/5/20) referred sarcastically to the idea that “Biden’s latest string of successes is because of the strong-arming of corporate lobbyists”—ignoring the existence of an $8 million pro-Biden Super PAC that was founded by corporate lobbyists.

The Times‘ Jennifer Steinhauer (3/5/20) took this general argument to the congressional level, arguing that losses by progressive challengers like Jessica Cisneros, who challenged right-wing (or, in Steinhauer’s words, “moderate“) incumbent Democrat Henry Cuellar in Texas—like similar losses by progressives in the 2018 midterms—show that outside of “deeply blue areas,” most Democrats “prefer more centrist candidates.”

There were some acknowledgments of the popularity of progressive policy positions. In the LA Times, for instance, a front-page article (3/15/20) was headlined, “Has Sanders Won the Ideological Battle?; Regardless of the Outcome, He Shaped the Policy Contours of This Democratic Race.” Yet even while reporting that “polling backs up Sanders’ claim that voters, particularly Democrats, look favorably on his call for broad policy change,” the conclusion is roughly the same: “Electability, not progressive purity, appears to be the prime motivator for Democratic voters.”

Of course, that raises the question that is almost never answered in such outlets: Why do Democratic voters think Biden is the more electable candidate, even if they like Sanders’ policy positions better? Why, if in head-to-head polling—our best available data on who is “electable”—Sanders has consistently done as well if not better than Biden over the months, have Democrats been convinced to vote against their own preferences?

The pundits appear willfully ignorant of their own role in shaping electability narratives. In the debates, electability was a favorite topic of the journalists doling out questions, and the message (evidence be damned) was clear: Sanders is unelectable. As we reported after studying every debate question prior to Super Tuesday (FAIR.org, 2/29/20), Sanders’ electability was questioned more than four times as often as Biden’s (21 to 5). While Biden’s lackluster campaign performance had prompted much commentary about whether he could win the primaries, the chorus of pundits and “experts” in political coverage counseled that this year, as always, the center is the one and only place for Democrats to find electability (e.g., FAIR.org, 10/25/19).

With Biden’s victory in South Carolina, media doubts about his strength were quickly banished. He walked away with an “earned-media tsunami” of three days of almost entirely exuberant media coverage, worth in the neighborhood of $70 million (Vanity Fair, 3/5/20). By comparison, Sanders, whose massive grassroots fundraising outpaced all of his competitors, spent $50 million in the last three months of 2019 (Politico, 2/20/20).

Donate
By Rise Up TimesPublished On: March 20th, 2020Comments Off on Who Wants a Revolution? No One Who Owns a Major Media Outlet