The Ribbon Minnesota action, created one piece at a time, will culminate in marking the 75th anniversary of the bombing of Nagasaki and Hiroshima on August 4, 2020 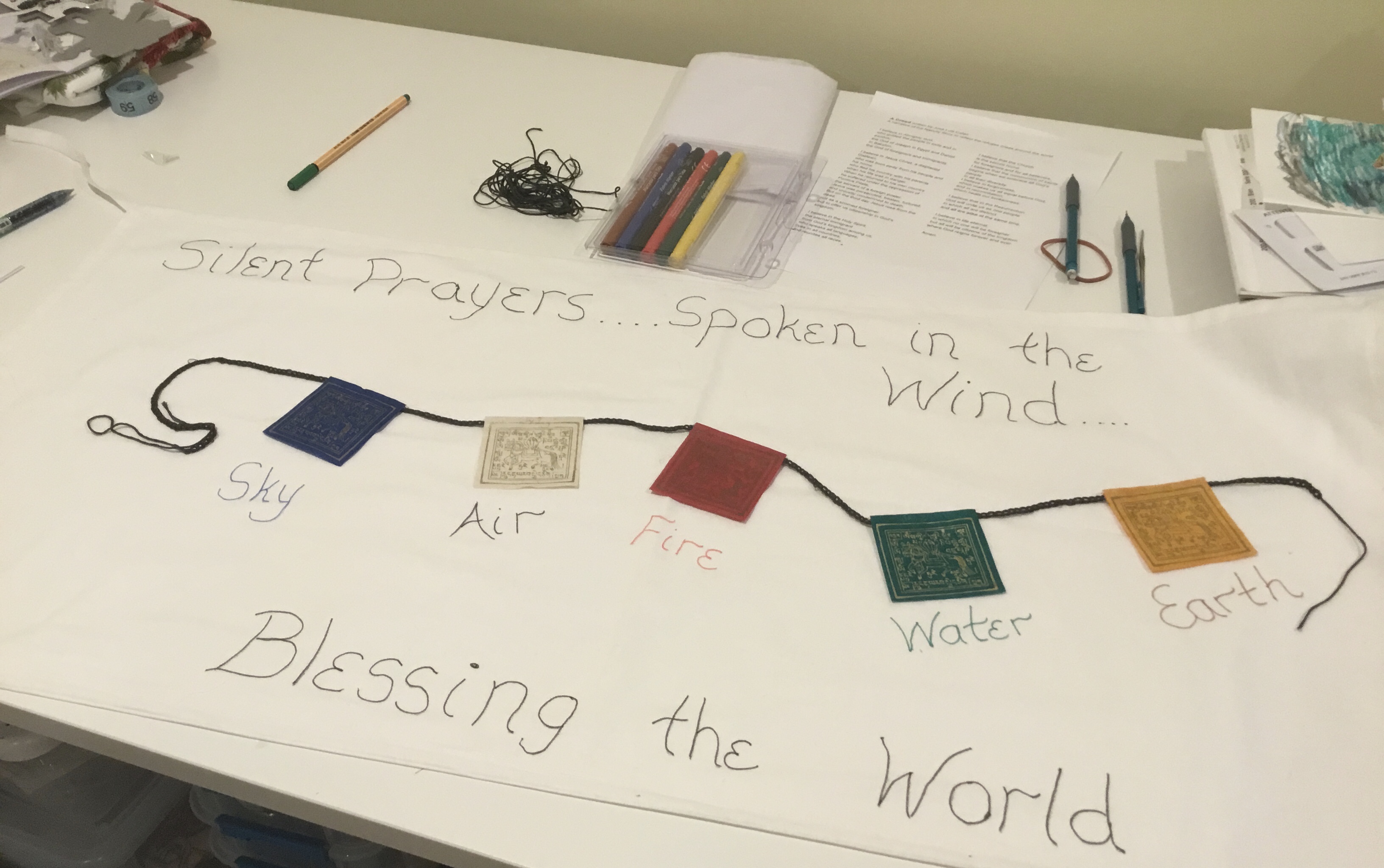 Members at Spirit of St. Stephen’s Catholic Community in Minneapolis thought that the occasion of the 75th anniversary of the bombing of Nagasaki and Hiroshima needed to be acknowledged in a prayerful, deliberate way. For inspiration they looked back to 1984 when over 27,000 people gathered in Washington, D.C., to encircle the Pentagon, a symbol of war, with the Ribbon, a symbol of peace.

The Ribbon was made up of thousands of strips of cloth measuring 36” wide by 18” long containing heartfelt symbols and words depicting what each individual maker “couldn’t bear to think of as being lost forever in nuclear war.” Each Ribbon segment was tied one to another until the Ribbon held by participants extended for 14 miles, wrapping around the Pentagon, coursing its way across the Potomac River, running on through the Washington Mall, and encircling the U.S. Capitol building. At the time, populist media star Studs Terkel commented that “the beauty of the Ribbon and the source of its power lie in the fact that it was created by hundreds of private citizens from across the United States and around the world.”

Recent international events make it all too clear that nuclear war is more than a possibility. We are once again at the brink, with some experts saying not if, but when. On January 23, the Bulletin of Atomic Scientists announced that they had moved the Doomsday Clock ahead, now calculating the likelihood of global catastrophe in 2020 to be 100 seconds to midnight. Certainly one response to all this is to sink into despair. But the Ribbon suggests a different option. The energy that goes into creating a Ribbon segment allows us to make tangible the hope we carry in our hearts. 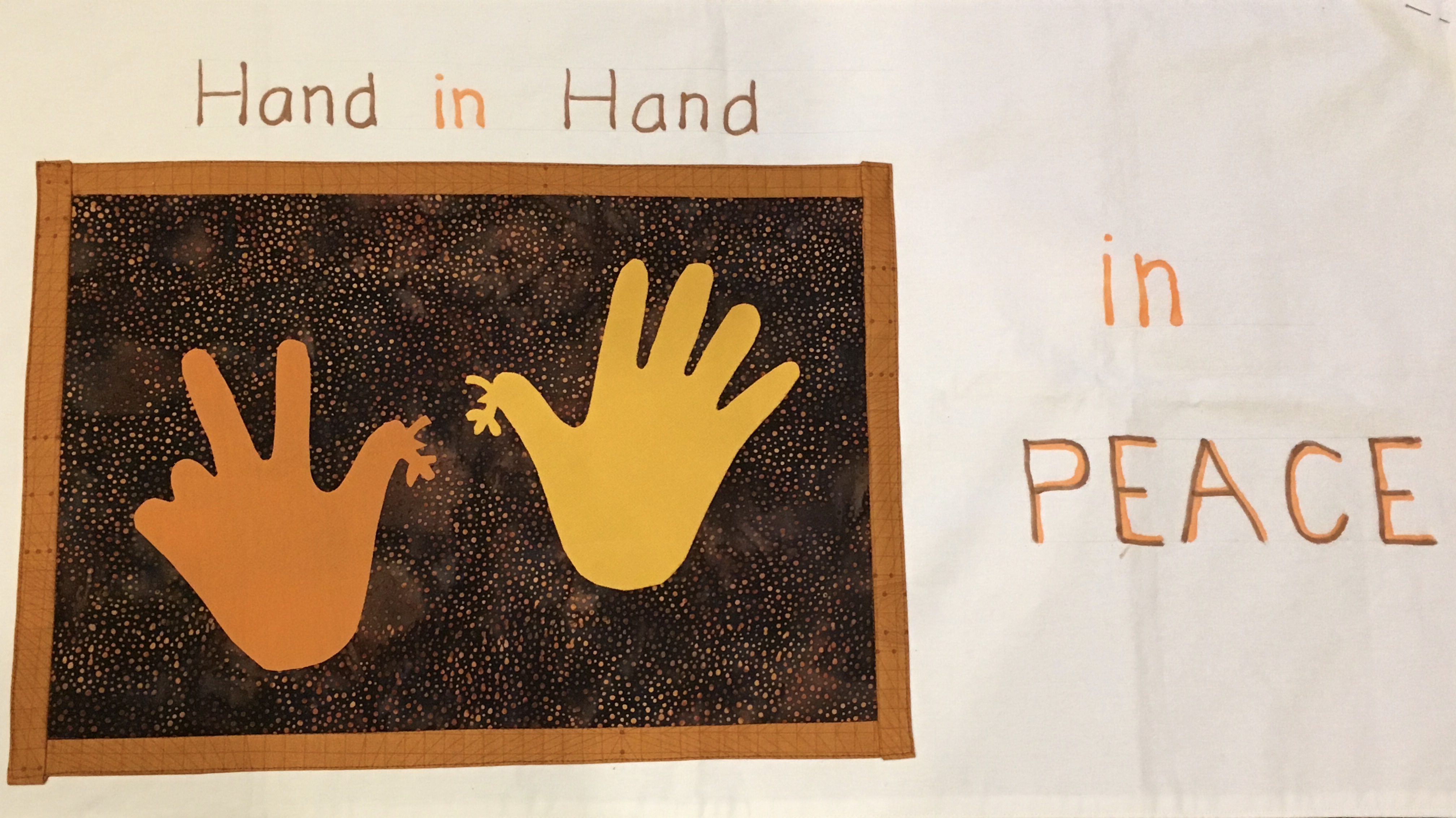 Justine Merritt, a suburban Chicago grandmother and teacher turned activist, conceived the idea of the Ribbon, describing each segment as a sign of tangible hope. She wrote: “When I was making my own ribbon panel, I found that as I would thread my needle, I was confronting the fear, confronting the grief and terror. As I drew the needle up through the cloth, I was praying for peace, and the prayer became an affirmation of life.” Starting in 1982 with her Christmas card list, Merritt invited others to create their own symbols. With grassroots support, Merritt journeyed across America, telling her story, reading her poetry and inspiring others to join her. She even came to Minnesota on occasion, and thanks to the support and guidance of local organizers Gail Irish, Patty Guerrero, and Barb Britain, 440 Minnesota Ribbon segments were linked together on that August day in Washington, D.C. While thousands gathered in Washington, D.C., others gathered in Japan to encircle the Atomic Bomb Dome in Hiroshima.

The Ribbon International, a nongovernmental organization located in New York City, continues to encourage creativity and promote peace. Ribbon events are planned in New York City and in other cities around the world. The Ribbon Minnesota is part of this international creative movement. Organizers have already made a small number of beautiful, loving, peaceful Ribbon segments. We plan to grow peace by piece, encouraging others to join us as we go.

What will we do with these Ribbon segments we create? In Minnesota, we will be present at all of the various 75th anniversary commemoration events scheduled in Minneapolis and St. Paul August 5 to 8. Prior to that, the Ribbon segments may show up at Earth Day events or 4th of July parades or other locations to promote peace and nuclear disarmament. This is a very organic project, and it will unfold as it will.

In 1985 Justine wrote: “We hope that the Ribbon will help political leaders from around the world realize that perhaps they have misjudged the deep yearning for peace within the people. We hope that the Ribbon will encourage those leaders to move ahead with greater resolve, to move ahead continuously, not always easily, but continuously, toward a planet without nuclear weapons.” May it be so today.

ACTION: If you are in the Twin Cities area reading this, consider joining us. For more information about The Ribbon Minnesota, check out our webpage: peaceribbonmn.net. To find specific Ribbon making parties, see the WAMM calendar at womenagainstmilitarymadness.org or call the WAMM office at 612-827-5364. Outside the Twin Cities area, we invite you to consider forming your own Ribbon project.

How to Make a Ribbon Panel

All ages and genders are encouraged to participate in the project.

ACTION: Have Your Senators Heard from You? Call Them to Ban Nuclear Weapons!

Of all the issues that their constituents contact them about, Senate offices report that nuclear weapons have not been among them. We need to elevate the concern about this existential threat. In Minnesota, volunteers from the WAMM Campaign to Ban Nuclear Weapons and Veterans for Peace-Chapter 27 have obtained at least one signature from every single municipality (851 incorporated towns and cities, 41 unincorporated) to total 22,768 signatures on a petition to urge the U.S. to sign and ratify the United Nations Treaty on the Prohibition of Nuclear Weapons. Activists are in the process of delivering the petitions to their U.S. and state senators. Support this action:

Karen Levad is a grandmother, a member of the St. Stephen’s Community, and organizer of The Ribbon Minnesota.
+++

womenagainstmilitarymadness.org
sources as well as original articles and stories.
word count: 214
Donate
By Rise Up TimesPublished On: March 15th, 2020Comments Off on Defying Doomsday: The Ribbon Minnesota, by Karen Levad