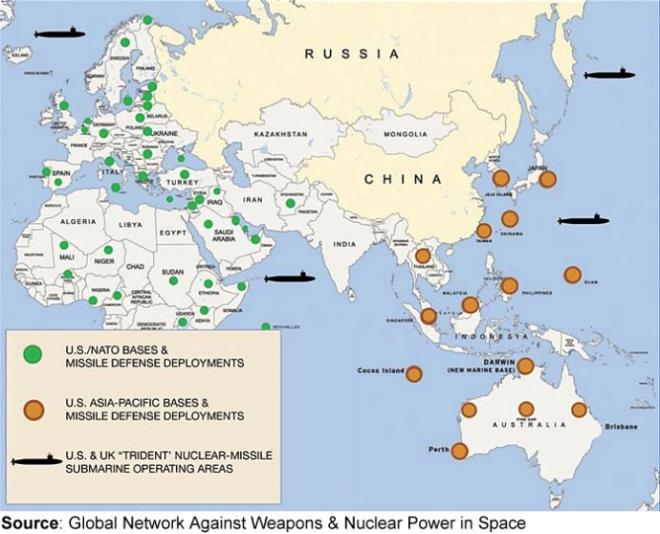 The bombing of suspected ISIS continued even after the first announcement that the Islamic caliphate had been defeated with the 2017 obliteration of Mosul in Iraq, and Raqqa in Syria. War on the Middle East is not over even when it’s been announced that it’s over. On October 12, 2019, former U.S. Secretary of Defense James “Mad Dog” Mattis, revered by pundits as the “adult in the room,” joined the retired general Sunday-morning talk show circuit.[1] His purpose? To warn that there could be a resurgence of ISIS with Trump’s decision to pull U.S. troops out of Syria.[2]

Not long ago, the War on Terror had been relegated to a series of sideshows. In January of 2018, as Secretary of Defense, Mattis released the official national defense strategy described as: “sharpening the American military’s competitive edge.”[3] Foreign policy planners began emphasizing “the Great-Power Competition” as the new main event.

The appearance of Mattis on our TV screens again is a reminder that there have been many changes in the highest echelons of Washington’s power, but these changes don’t make much difference in overarching U.S. foreign policy. When it comes to war, driven as it is by the manufacturers of bombs, bullets, and media narratives, the Washington power structure embraces it in whatever form it takes. Democrats were joined by Republicans in condemning Trump’s abrupt removal of U.S. troops from northern Syria, where we shouldn’t have been in the first place.[4] And both sides agreed when the Trump administration announced the biggest threat was competition with Russia and China.

… members of the U.S. foreign-policy establishment widely agree that the Trump administration has been prudent to shift America’s focus from counterterrorism to what the Pentagon’s national defense strategy calls ‘the reemergence of long-term strategic competition.’[5]

On September 9, 2019, Richard Fontaine in Foreign Policy magazine described it this way:

For all the acrimony in Washington today, the city’s foreign policy establishment is settling on a rare bipartisan consensus: that the world has entered a new era of great-power competition. The struggle between the United States and other great powers, the emerging consensus holds, will fundamentally shape geopolitics going forward, for good or ill. And more than terrorism, climate change, or nuclear weapons in Iran or North Korea, the threats posed by these other great powers—namely, China and Russia—will consume U.S. foreign-policy makers in the decades ahead. [6]

With other powers on the rise, the U.S. sees Russia and China as “threats” to its hegemony in a world once dominated by American economic power and military might. Aggressive competition is particularly frightening when it comes to the scrapping of international arms control treaties involving nuclear weapons.

The new competitive model alarmed Russia and China so much that they jointly called a UN Security Council meeting this past August in the wake of the U.S. withdrawing from the Intermediate-Range Nuclear Forces (INF) Treaty. Under the treaty, INF missiles, which are land-based and have a range of 310 to 3,410 miles, were banned. Their range from locations in Europe and the Asia Pacific could reach Russia and China.

Over the years, Russia and the U.S. have accused one another of violating the treaty:

The Obama administration in 2014 first publicly accused Moscow of violating the INF by testing a treaty-busting cruise missile, and the Trump administration pressed the accusation. Russia denies it cheated, and it counters with a contention that America’s armed drones and missile defense systems in Europe are violations.

U.S. military officials said 95 percent of China’s ballistic and cruise missiles would have violated the treaty.[7]

Yet, in spite of disagreements, Russia and the U.S. remained partners to the bilateral treaty, which was part of the international arms-control framework and served as a basis for nuclear cooperation – till now. (China was not a party to the treaty. It did not have the technology that the treaty covered at the time it was drawn in 1987.) The current U.S. administration, which actively opposes existing international treaties in general, blamed Russia for the U.S.’ own withdrawal from the treaty, stating that “Russia is solely responsible for the treaty’s demise.” [8] Further, the U.S. quickly announced plans to openly test a new, previously banned missile.[9]

Is it possible for us to listen to what representatives of Russia and China actually say about the implications of the U.S. withdrawing from the treaty? Can we put on pause straw man arguments about human-rights violations in foreign countries (when our country doesn’t have a moral leg to stand on)? Can we eliminate the conversation-stoppers like “dictatorship” and “autocratic regime” from our vocabulary so we actually hear what foreign diplomats say? Even if we know that other states act as much out of self-interest and their leaders may lie as do our own, could we for once give other states credit for being reasonable?

When Russian and Chinese representatives have something to say, might listening be in our self-interest, as well?

Carla Stea, United Nations Headquarters, New York correspondent for Global Research, Canada, reported the response of Russia and China at the special August 22 UN Security Council session. [10] Understanding that the U.S. position was clear about withdrawing from the INF, Dmitry Polyanskiy, deputy permanent representative of the Russian Federation, directed his remarks at the UN primarily to “our European colleagues”:

Are they [the European states] aware that, because of the geopolitical ambitions of the United States, we are all just one step away from an uncontrolled, unregulated arms race? …according to publicly available data the U.S. military budget is about $700 billion, while the budget of NATO amounts to $1.4 trillion. These are just approximate figures. For reference, the military budget of Russia, which is allegedly a threat to us all, is about $60 billion – that is, more than 20 times lower than that of NATO…

The United States withdrawal from the INF Treaty is another negative act in the pursuit of unilateralism and the shirking of international obligations. Its true intention is to render the Treaty no longer binding and seek a unilateral, absolute military advantage. China’s land-based intermediate-range missiles are all deployed within Chinese territory. They are for defence purposes only and pose no threat to any other country. China firmly opposes the United States attempts to deploy land-based intermediate-range missiles in the Asia-Pacific region…

A Race to the Death Is On

The following month, the Show of Force military parade at the People’s Republic’s 70th anniversary bash in Beijing featured state-of-the-art Chinese-made weaponry and 15,000 military troops marching in formation.[11]  It’s obvious that China is not content to sit quietly while the U.S. installs nuclear-capable planes and other modernized weaponry (including first-strike weapons) targeting its nation while maintaining more than 130,000 U.S. military troops in its region.

And Russia? By inference, NATO acknowledges that Russia was provoked to speed up missile development:

Russia moved forward with the deployment of the SSC-8/9M729 [a cruise missile forbidden under the IMF Treaty] only after the radical downturn of Russia’s relationship with the West following the illegal annexation of Crimea.  A plausible explanation is that the Kremlin concluded that going slow did not offer any benefits and the potential benefits of dividing [the NATO] Allies were increasing, so the time was ripe for moving full steam ahead.” [italics by WAMM Newsletter editor who also disputes the context-lacking characterization that Russia “illegally” annexed Crimea.][12]

And the Winner Is…?

It should be clear that Russia and China are pursuing ever more dangerous weapons because they are reacting to threats aimed at them. The U.S. behaves as though it’s in a competition it can win. But there can be no winners in a race for nuclear superiority. Just to be in the race deprives a country of national treasure that could otherwise be used for the benefit of its citizens. And, even worse, competing with death threats is a horrible way to live and, if acted on, will be a horrible way to die.

And, if anything should make policymakers think, you might suppose it would be wondering which great competitor Turkey favors. It has a “done deal” contract to purchase new advanced Russian air-defense missile systems and has already begun receiving parts (S400 batteries).[13]

Turkey is presumed to be a U.S./NATO ally but in retaliation for Turkey attacking the Kurds in northern Syria, Trump sanctioned Turkish officials, hiked tariffs on Turkish steel up to 50 percent, and halted trade negotiations.[14] The U.S’s “Great-Power Competitor” Russia jumped in as a powerbroker and sent in military patrols to create a buffer zone between Turkey and Syria (Let’s not forget that Russia actually has the permission of the Syrian government to be in Syria.)

The U.S. sent its own powerbrokers Vice President Pence and Secretary of State Pompeo to Ankara to meet with Turkish President Erdoğan. Art-of-the-deal Trump announced that his promise of lifting the sanctions (that he imposed) was great leverage for the U.S. to get a temporary Turkish ceasefire.

On October 21, it was reported that members of Congress (which had passed a bi-partisan resolution condemning Trump for pulling troops out of northern Syria and endangering the Kurds in the first place)[15] were not talking in terms of lifting sanctions but instead proposing a “strong Bi-partisan sanctions package” on Turkey. Supposedly this humanitarian intervention tactic was to protect the Kurds from Turkish annihilation but the editors of the Wall Street Journal revealed the real reason: “The goal is to get back to negotiating an arrangement that protects the Kurds, protects Turkey’s legitimate security concerns along its border, and helps develop the oil fields in the region.” [16]

Syria’s oil fields are significant to Syria’s economy but not to the world oil market. What is significant to the world market is Syria’s key location through which Middle Eastern oil and gas pipelines could route to the Mediterranean. On October 22, Washington was reported unable to agree to sanctions on Turkey; Congressional members were belatedly befuddled by the fact that this would drive Turkey even closer to Russia. Such a dilemma! It’s hard to destroy the Syrian government under Assad and gain access to pipeline routes, while at the same time punishing NATO ally Turkey when Turkey is cooperating with Syria and great-power competitor Russia.

So, in light of the “Great-Power Competitors” at this flashpoint, is anyone nervous about the fifty U.S. tactical nuclear weapons sitting at Incirlik, the U.S. Air Force base in the Turkish city of Adana?[17]

Let’s Stop Before We Reach the Finish Line!

We need to cry Uncle (Sam), disqualify ourselves from this race, and get out of the Middle East and the war business. The only way the world will survive is if we cooperate instead of compete.

Call your senators and demand that the U.S. sign the International Treaty to Abolish Nuclear Weapons.

[1] Tatum, Sophia. “Mattis: Mad Dog was a name given by the press.” CNN. January 12, 2017. tinyurl.com/y4jk5kna [2] Kamisar, Ben and McCausland, Phil. “Mattis Warns of ISIS could resurge. The Enemy Gets a Vote.” NBC News. October 12, 2019. tinyurl.com/y45nw3u4
Subscribe to RiseUpTimes.org    Support independent media. Donate Now!
By WAMM Newsletter Staff  WAMM Newsletter
300
37
Donate
By Rise Up TimesPublished On: November 22nd, 2019Comments Off on The Great-Power Competition: Can We Hear What Our Competitors Say?