This week on On Contact with Chris Hedges, Dr. Margaret Flowers and attorney Kevin Zeese speak about social transformation and building a culture of resistance. 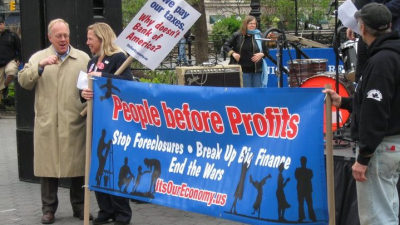 Chris Hedges and Margaret Flowers at the Bank of America protest in New York City, April 2011. By Kelly Locker.

They discuss the roles of movements and electoral politics in social change and the necessity of direct action to impact the power structure. They also discuss the free Popular Resistance School.

Hedges was involved in organizing the occupation of Freedom Plaza in 2011, part of the Occupy Movement, and the strategy retreat that led to the founding of Popular Resistance in 2013. Hedges’ first-hand knowledge of major transformations that countries have experienced while being a foreign correspondent for the New York Times informs the work of Popular Resistance.

independent news sources as well as original articles and stories.
Donate
By Rise Up TimesPublished On: October 17th, 2019Comments Off on On Contact: Rebel, Rebel with Popular Resistance