So far, around 17 people have died and almost two hundred have been injured in the month-long protests.

At least four people have died and dozens were injured between Friday and Saturday in strong protests in Port-au-Prince, Haiti, after police used tear gas to dissipate protesters.

The people on the streets are demanding the resignation of President Jovenel Moise in demonstrations that have been going on since September.

Protests, sparked by a fuel shortage last month, have led to the closure of schools, public offices and many businesses, as well as the interruption of aid by non-governmental organizations.
+++ 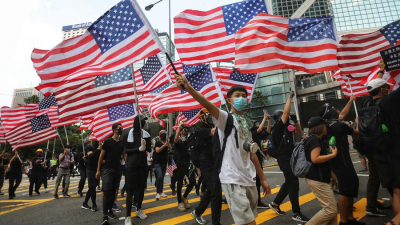 Above Photo: Protesters wave US flags as they march to the US consulate in Hong Kong on September 8, 2019. Photo: Vivek Prakash / AFP

Excerpts from the article are included below. To read the full article click the title above.

Ma is the go-to expert in what is arguably the most sensitive subject in Hong Kong: He meticulously tracks perceived foreign interference in the Special Administrative Region (SAR).

Ma received me at his office in Wanchai this past Saturday morning after a “dark day” of rampage, as described by the SAR government. He wasted no time before calling my attention to a petition requesting a “United Nations investigation into the United States’ involvement in Hong Kong riots.”

He let me see a copy of the document, which lists the People’s Republic of China as petitioner, the United States of America as respondent nation and the Hong Kong Legal Exchange Foundation as ex parte petitioner. This was submitted on Aug. 16 to the UN Security Council in Geneva, directed to UN Secretary-General Antonio Guterres.

In the document, Issue II deals with “funded, sponsored and provided supplies to any organizations, groups, companies, political parties or individuals” and “trained and frontline protesters, students and dissidents.”

Predictably, the US National Endowment for Democracy is listed in the documentation: its largest 2018 grants were directed to China, slightly ahead of Russia.

The NED was founded in 1983 after serial covert CIA ops across the Global South had been exposed.

So it’s no secret, all across the Global South, that under the cover of a benign umbrella promoting democracy and human rights, the NED works as a soft-power mechanism actively interfering in politics and society. Recent examples include Ukraine, Venezuela and Nicaragua. In many cases, that is conducive to regime change.

The Hong Kong protests are an attack on socialism

There’s a tendency among progressives in the United States to support big crowds of people protesting in other countries. No doubt, the corporate media assists in this process by labelling certain movements ‘pro-democracy’ or ‘freedom fighters.’

City of La Plata, in the province of Buenos Aires, hosts the 34th National Women’s Encounter which the organization expects to be the most massive, pending the strong thunderstorms that hit the country and forced the suspension of the inaugural act.

With the fight still for the right to abortion and also the pain for the constant femicides and other issues that affect them, the 34th National Women’s Meeting took place in La Plata, capital of the province of Buenos Aires, Argentina.

The organizers expected 200,000 people to go to the city during the three days of the meeting despite the inclement weather, which forced the first act to be suspended but will not put the rest of the program at risk, which mostly develops in enclosed spaces.

Hundreds of women from all over this southern nation and from above gathered from this Saturday until Monday in a massive act where they claimed for their rights, a space that has gained strength in these years.

Rage Against The War Machine: An Interview With Peace Activist Cindy … 3 comments    a day ago Kelly Storme —  I shared this on a different article but it seems quite relevant here as well… This is a direct quote from The King Center… “For Dr.King, The Beloved Community was not a lofty utopian goal to be confused with the rapturous image of the Peaceable Kingdom, in which lions and lambs coexist in idyllic harmony. Rather, The Beloved Community was for him a realistic, achievable goal that could be attained by a critical mass of people committed and trained in the philosophy and methods of nonviolence. Dr. King’s Beloved Community is a global vision, in which all people can share in the wealth of the earth. In the Beloved Community, poverty, hunger and homelessness will not be tolerated because international standards of human decency will not allow it. Racism and all forms of discrimination, bigotry and prejudice will be replaced by an all-inclusive spirit of sisterhood and brotherhood. In the Beloved Community, international disputes will be resolved by peaceful conflict-resolution and reconciliation of adversaries, instead of military power. Love and trust will triumph over fear and hatred. Peace with justice will prevail over war and military conflict.”

Organisers said ‘more than 20,000 people’ took part in the demonstration in Paris after Ankara stepped up its assault on Kurdish-held border towns 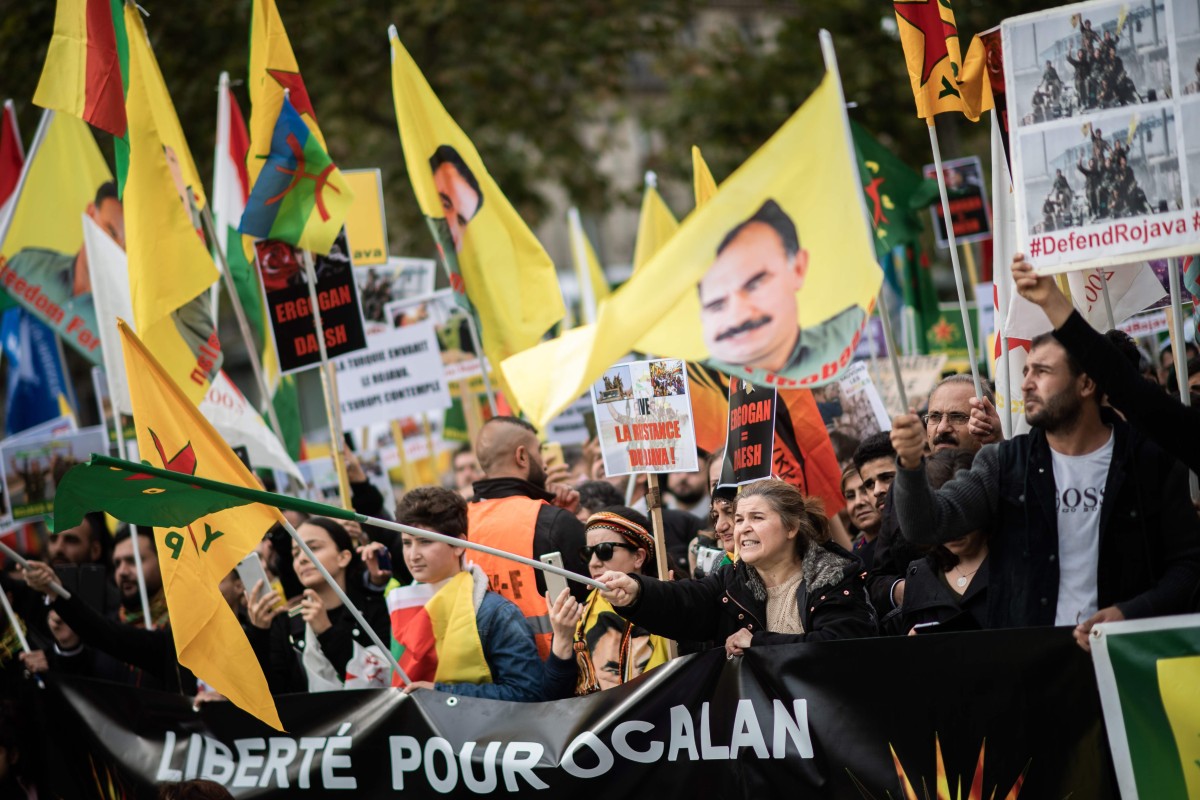 People hold pro-Kurd flags and banner in Paris on October 12. Photo: AFP
Thousands of people, some shouting “Erdogan terrorist”, took to the streets of Paris and other European cities on Saturday in protest at the Turkish assault on Kurds in Syria.

Organisers said “more than 20,000 people” took part in the demonstration in Paris after Ankara stepped up its assault on Kurdish-held border towns in northeastern Syria on Saturday, defying mounting threats of international sanctions.

The Turkish offensive began on Wednesday after US President Donald Trump ordered American troops to pull back from the border.

Trump has faced a firestorm of criticism for abandoning a loyal ally in the US-led campaign against the Islamic State group.

Finland, Germany, Norway and The Netherlands have already announced that they are stopping arms exports to the country, as now have France and Germany.

Editor’s Note: It’s rather sad they were evidently manufacturing and selling arms in the first place!  It is really sad that so many people would object to Trump’s and Turkey’s actions, but are not opposed to war altogether. If only so many people would march against the morass of the war in Syria and call on all parties involved for an immediate end.

The contents of Rise Up Times do not necessarily reflect the views of the editor. Articles are chosen for republication based on the interest of our readers. Rise Up Times republishes articles from a number of other independent news sources as well as original articles and stories