US Bombs In Yemen Are Costing An Entire Generation Their Future 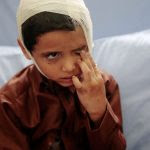 By Ahmed Abdulkareem, Mintpress News. Sadaa, Northern Yemen – Third-grader Farah Abbas al-Halimi didn’t get the UNICEF backpack or textbook she was hoping for this year. Instead, she was given an advanced U.S bomb delivered on an F-16 courtesy of the Saudi Air Force. That bomb fell on Farah’s school on September 24 and killed Farah, two of her sisters, and her father who was working at the school. It will undoubtedly have an irrevocable effect on the safety and psyche of schoolchildren across the region.  Over the course of Yemen’s pre-war history, which locals fondly refer to as the happy Yemen years, never has… -more-***

Voices   Civilian Deaths in U.S. Wars Are Skyrocketing Under Trump. It May Not Be Impeachable, but It’s a Crime.

There are so many reasons why Trump should be the object of our moral outrage, not least his role in the violent deaths of thousands of innocent people.***

Voices   It Doesn’t Have to Be This Way: Stepping Away From a Disastrous War Over Kashmir

War looks inevitable now, but the escalation between India and Pakistan over Kashmir has invited international involvement.Voices   Civilian Deaths in U.S. Wars Are Skyrocketing Under Trump. It May Not Be Impeachable, but It’s a Crime.***

The contents of Rise Up Times do not necessarily reflect the views of the editor. Articles are chosen for republication based on the interest of our readers. Rise Up Times republishes articles from a number of other independent news sources as well as original articles and stories