Trump Attacked the Women of Color Who Led the Push for Impeachment. Then CNN Erased Them

According to a weekend CNN feature, credit for the impeachment effort should instead go to four freshmen members of Congress — all of them white women with backgrounds in national security work. These women, who rather unbearably call themselves “the badasses,” only came around to supporting impeachment in the last two weeks. THERE IS A growing double narrative about who deserves credit for the effort to impeach President Donald Trump. One side of the narrative, coming primarily from the media, lauds late-coming figures to impeachment as saviors, and the other, coming from Trump, tears down impeachment’s early adopters as malicious traitors. Though the two campaigns are almost diametrically opposed, their effects are the same: to question the legitimacy and “seriousness” of leftists and women of color who have risen to leadership positions in our national politics.

First, the campaign to tear down women of color who support impeachment. Following the opening of a formal impeachment inquiry, Trump’s reelection campaign poured money into a typically vicious, racist, and mendacious ad blitz. A barrage of Facebook ads, costing up to $1.4 million, claimed that impeachment efforts were the work of the “socialist squad” whose members had made “pro-terrorist remarks.” On Saturday, Trump took to Twitter to decry the so-called Squad — Reps. Alexandria Ocasio-Cortez, D-N.Y., Ilhan Omar, D-Minn., Ayanna Pressley, D-Mass., and Rashida Tlaib, D-Mich., all women of color — as well as Jewish lawmakers Rep. Jerry Nadler, D-N.Y., and Adam Schiff, D-Calif., as “Democratic Savages” for their impeachment efforts.

The Trump campaign’s anti-impeachment strategy is as obvious as it is dirty: Gin up conspiratorial resentment in his base by playing on racist and red-scare tropes. It’s an intolerable narrative, but one that gets at least one thing right: The Squad, alongside a number of other progressive members of Congress, many of them people of color, do deserve the credit for pushing the House toward impeachment.

Read Our Complete Coverage All the President’s Crimes

Then there’s the other narrative, one in which the media has selected different heroes of the burgeoning impeachment effort — without including the leftist women of color. According to a weekend CNN feature, credit for the impeachment effort should instead go to four freshmen members of Congress — all of them white women with backgrounds in national security work. These women, who rather unbearably call themselves “the badasses,” only came around to supporting impeachment in the last two weeks.

On the air, CNN host Jake Tapper, following up on a Trump campaign adviser’s remarks, questioned whether two early advocates for impeachment — Tlaib and Rep. Al Green, D-Texas, who is black — undermined the seriousness of the pursuit. “Do those members of your party,” Tapper asked Rep. Elissa Slotkin, D-Mich. — one of the “badasses” — on his Sunday show, “undermine the seriousness with which you and other colleagues of yours want to proceed?” (Slotkin simply said she couldn’t speak for others and returned to her talking points.)

Taken together, the picture speaks to an even more grim dynamic: While Trump demonizes Congress’s progressive women of color, CNN erases their work.

THE TRUTH IS that, amid his lie-filled efforts to rile up his white nationalist base against impeachment, Trump — in his identification of the Squad as the source of his problems — has hit on something that CNN can’t seem to grasp: Women of color are leading the way on these efforts. Yet, instead of rousing defenses against Trump’s attacks and acknowledgements of the political risks women of color are taking, the media seems to be writing them out of the story.

Tapper remembered Tlaib’s famous rallying cry — “We’re going to impeach the motherfucker!” — but he didn’t mention that it was Rep. Maxine Waters, D-Calif., who first called for impeachment in early 2017. And while Tapper lambasted Green as unserious, he neglected to mention that Green was the first member of Congress to actually file articles of impeachment against the president.

Ignoring the work of these people of color, CNN instead lifted up as “unlikely leaders on impeachment” Slotkin and Rep. Abigail Spanberger, D-Va., both former CIA officers; Chrissy Houlahan, D-Pa., an ex-Air Force officer; and Mikie Sherrill, D-N.J., and Elaine Luria, D-Va., who are both former Navy officers. All of these women were against impeachment not long ago — some of them as recently as mid-September. 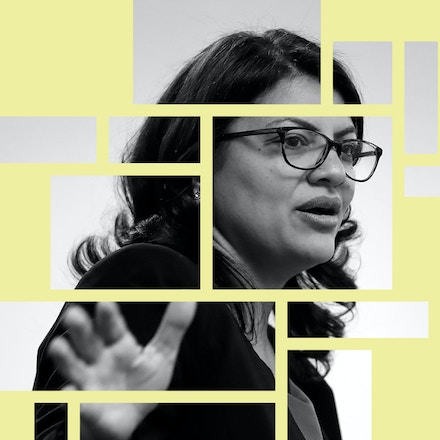 When Do We “Impeach the Motherfucker”? (With Rashida Tlaib)

Still, for people of color, and especially women of color, this approach is not shocking. “White people being credited for something initiated or created by people of color is nothing new, but it’s always infuriating when it has to be pointed out,” wrote Paul Meara for BET, responding to CNN’s piece, which claimed that the five white women’s recent about-face “changed history.”

The CNN article, written by Dana Bash, is peppered with the lexicon of a personified pink pussy hat; the women are framed with all the trappings of white liberal feminism. They are, we are told “a band of sisters,” who “moved from hard no to hell yes on starting an impeachment inquiry.” And “they say it was all for one, and one for all.” That is, moderate realpolitik dressed up as the #resistance. The story’s lead accompanying photograph shows three of the “badasses” — again, self-proclaimed — taking a selfie in front of the Capitol.

The CNN segment focused on the political risk being undertaken by these frontliners and how they’ll try to sell impeachment — which they see as unpopular — in their districts. “Backing an impeachment inquiry is risky political business for these congresswomen,” Bash said, because they won in “mostly Trump territory.”

The five moderate members of Congress, alongside two male freshmen — Reps. Gil Cisneros, D-Calif., and Jason Crow, D-Colo., who are both also veterans — penned an op-ed in the Washington Post last week arguing for an impeachment inquiry. “We are veterans of the military and of the nation’s defense and intelligence agencies. Our service is rooted in the defense of our country on the front lines of national security,” the representatives wrote. “Now, we join as a unified group to uphold that oath as we enter uncharted waters and face unprecedented allegations against President Trump.”

Slotkin said this experience prepared them for making tough decisions: “All of us in our prior lives all the time had to make hard calls for the reasons we thought were right, when we knew that not everyone would understand or even know.”

According to CNN, the op-ed gave House Speaker Nancy Pelosi, D-Calif., “critical political cover as she announced a formal impeachment inquiry.” It’s no doubt true that presenting the case for impeachment in the framework of militaristic patriotism, supported by white moderates, was the “cover” the historically spineless Pelosi needed.

In a literal sense, the so-called badasses may have “changed history,” as CNN put it, by simply being a necessary element in an encumbered political process. Under such a framing, every politician, indeed every living being, “changes history” every day. But pressure had been mounting for months, if not in their districts, then in districts across the country.

Contrast the “badasses,” even for a moment, with the backlash that Tlaib faced for her call to “impeach the motherfucker,” and it’s not hard to see that the risk faced by the “badasses” fails to stack up. To suggest these five white freshmen are thus historic political leaders is an affront to the women who are.

Update: October 1, 2019, 9:34 a.m.
This story has been updated to reflect that CNN host Jake Tapper’s question to Rep. Elissa Slotkin was based on remarks made earlier in panel by David Urban, a Trump campaign adviser.

Excerpt: Taken together, the picture speaks to an even more grim dynamic: While Trump demonizes Congress’s progressive women of color, CNN erases their work.