After witnessing the influx of migrants on the more recent ‘migrant caravans’ predominantly coming from Honduras, I felt called to go to Honduras—to be present to a land that though deeply rich in natural resources and culture was becoming increasingly dangerous and uninhabitable for its citizenry to the point where people felt compelled to risk their lives and those of their children to escape.    —Gala King 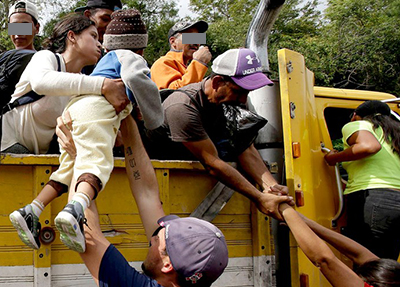 The economic interest of the U.S. in Honduras dates back to the 1850s, and has included mining, large-scale fruit plantations, export processing zones, mono-crop agriculture, and tourism.

Militarily and politically, the U.S. has also played a major role in Honduras with the signing of the military bases agreement in 1954, providing a strategic location for the U.S. military throughout the Central American wars. In 2009, the U.S. backed the military coup of democratically elected President Manuel Zelaya. Since that coup, the U.S. has backed several fraudulent elections and currently supports the president, Juan Orlando Hernandez (“JOH”), despite the ongoing allegations of corruption and human rights abuses.

After 150 years of U.S. intervention, the root causes of migration in Honduras include: the government for and of the elite, the military and militarized police, transnational banks and corporations, and an extractive economic model. Combined, these create cycles of violence, impunity, corruption, and inequality, which directly impact the people vis à vis organized crime, land displacement, war on the poor, and human rights abuses. 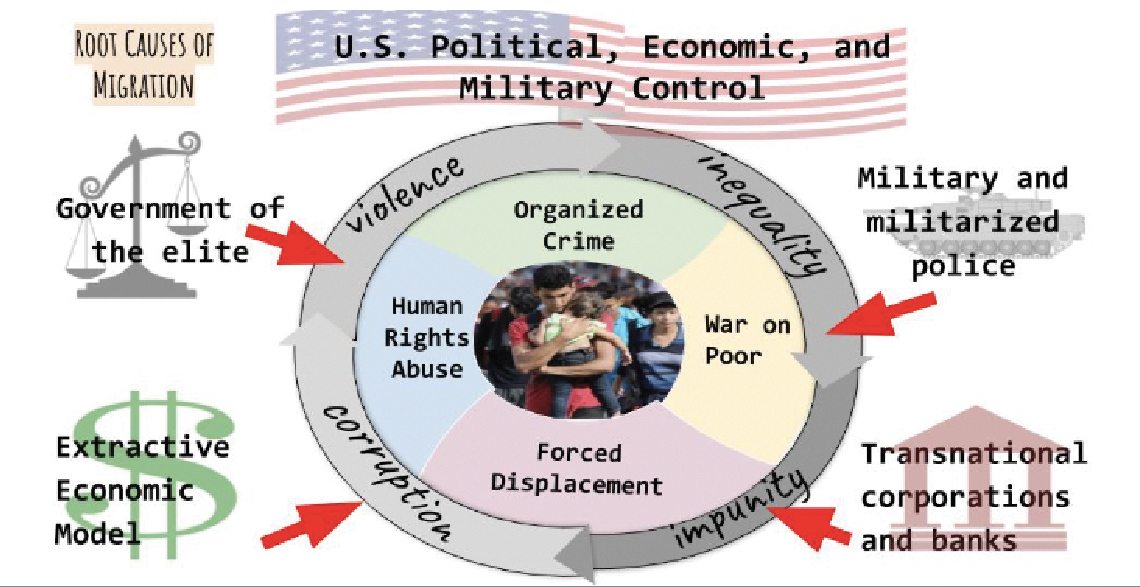 As Father Ismael “Padre Melo” Moreno, a Jesuit priest and the director of Radio Progreso, states, “It is the alliances between oligarchic business and political elites and transnational capital, backed by the U.S. embassy, the armed forces, and people from organized crime, that create the caravans.” These are the root causes of migration.

A delegation of solidarity

IM4HI partnered with SHARE Foundation, Leadership Conference of Women Religious, and Sisters of Mercy of the Americas to organize an interfaith delegation in March 18-25, 2019. Nearly 75 people answered this call and joined the delegation. It was comprised mostly of people of various faith backgrounds representing different organizations, as well as community organizers and human rights activists. My father, Gary King, a human rights activist, and I were among the 75.

The delegation was hosted by Radio Progreso and ERIC (Equipo de Reflexión, Investigación y Comunicación) in Honduras that have been around for over 60 years, conducting community organizing, investigating human rights abuses, and broadcasting from a community radio station. Since the 2009 military-backed coup, state-sanctioned repression and violence against the people defending land and human rights had been escalating. Radio Progreso was the only radio station covering the grassroots resistance. The director of Radio Progreso and ERIC, Padre Melo, had been seeking international solidarity, calling on the international community to come and be an international public witness to their pursuit for justice.

Since our delegation was so large, we were split into three smaller groups. My father and I traveled to the Bajo Aguan region in the northern, central part of Honduras. When we arrived, I was amazed at the beauty of the land, rich in biodiversity and land area, attracting corporate interests for the tourism, mining, and mono-crop African Palm Oil industry. With the increase in these extractive industries over the past few decades, there was also an increased military presence throughout the Aguan region, which we witnessed. 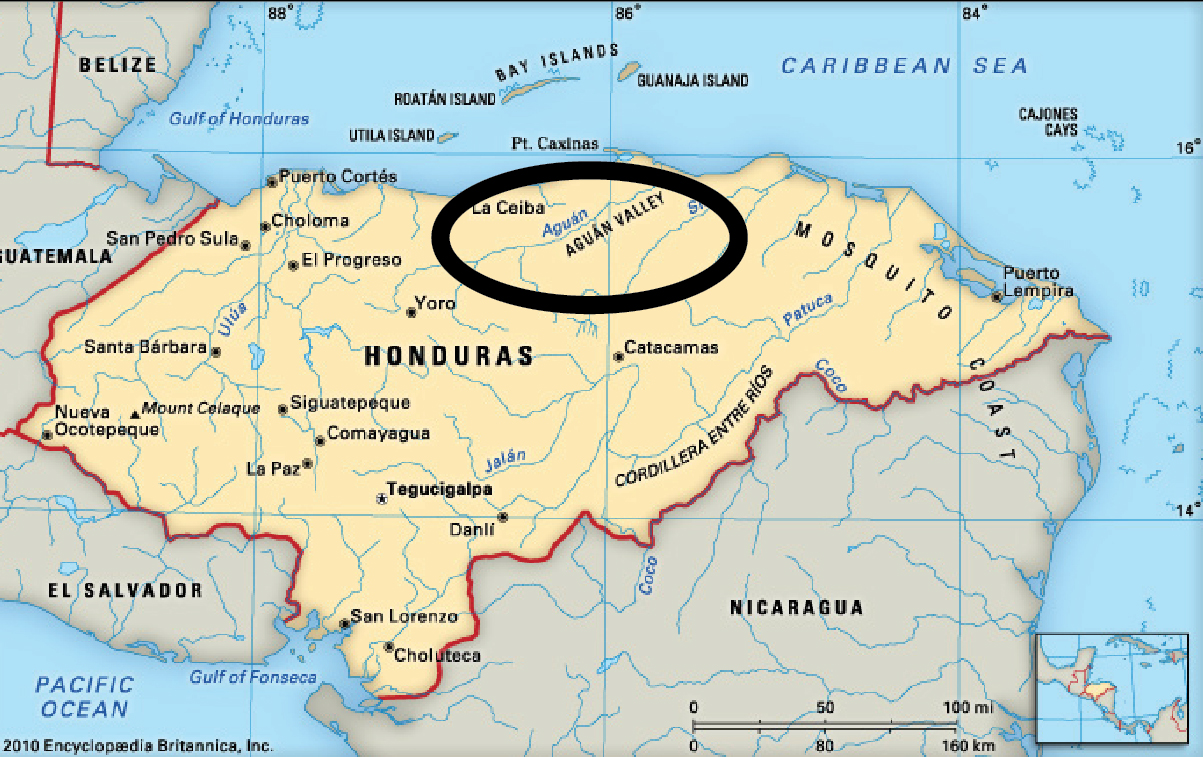 A crisis developed that had its origins between 2010 and 2014, when a series of mining exploration concessions were granted to mining companies by the Honduran government. This resulted in conflicts between mining companies and local townspeople, and in the contamination of drinking water, including from the Aguan River that runs through the town of Guapinol. In August 2018, prior to our visit, community members set up “Guapinol Dignity Camp” to peacefully protest illegal mining concessions in their community, in an effort to protect their water. After about 90 days, over 1,000 military and police forcibly evicted the community members with tear gas and violence. As a result, 13 of the community leaders were charged with false crimes such as blocking roads, arson, illegal detention, and illicit association. Although the charges were eventually dropped, the government appealed the decision, and the community leaders were still feeling threatened, with many living in hiding.

When our delegation arrived in Guapinol, over 100 community members met us and escorted us to the Aguan River, inviting us to experience the beauty of the river, as we immersed our feet and legs, and participated in a river blessing. Within 20 minutes of the river blessing, an armed military unit appeared on the other side of the river, glaring and taking photos of the community and delegation. The community responded powerfully, chanting at the military to leave, reminding them who the water belonged to. This is their daily reality.

Throughout our trip, we witnessed the community strength and commitment to nonviolent resistance. Despite the militarization of their community and criminalization of their leaders, the Guapinol community leaders continued to organize and speak out against state-sanctioned violence and human rights abuses. Even in the face of death threats and radio equipment being vandalized, the staff at Radio Progreso continued to bravely broadcast the voices of the people. With the ongoing state-sanctioned repression, the community continued to protest in the streets, unifying behind the chant “Fuera JOH!” (Leave, Juan Orlando Hernandez).

Act to end U.S. complicity in the root causes of migration from Honduras. Two ways to support Honduras:

A protest against the assassination of Berta Caceres, , Honduran indigenous and environmental leader.

Urge Congress to Pass the Berta Cáceres Human Rights Act (H.R. 1945). March 2, 2019 marked the three-year anniversary of the assassination of Berta Cáceres, the Honduran indigenous and environmental rights leader. The Berta Cáceres Human Rights in Honduras Act was reintroduced to continue the call for justice. If passed, this bill would suspend U.S. security assistance to Honduran military and police until certain human rights conditions are met, including justice for Berta Cáceres. Contact your House Representative to urge them to co-sign the bill today.

Support the Fall Tour. In September, Padre Melo will be visiting a few cities in the U.S. on a speaking tour. His presentation will be live-streamed and groups are encouraged to organize viewing sessions. In October, we hope a few Guapinol community leaders will travel to the U.S., speak in 2-3 cities, and receive the prestigious Letelier-Moffitt Human Rights Award, in Washington, D.C. Support these visits by:

I was raised in Minnesota by an immigrant mother from the Philippines and a human rights activist as my father.  I grew to understand how my Filipina American identity was shaped by U.S. foreign policies which colonized my mother’s homeland, and how I carry a deep sense of responsibility to hold my U.S. government accountable for its atrocities locally and abroad.

I have found the space to engage my dual identity in culturally relevant and faith-rooted social movements. As the faith community organizer of Northern California for the Interfaith Movement for Human Integrity (IM4HI), I engage dozens of sanctuary faith communities across Northern California, to provide accompaniment for asylum-seekers, advocate for more just policies and practices, and address the root causes of migration. IM4HI began coordinating delegations to Honduras in 2015, in partnership with other organizations in the U.S. and Honduras.

Donate
By Rise Up TimesPublished On: September 22nd, 2019Comments Off on Root Causes: Why Hondurans Flee or Resist, by Gala King