Corporate Media get the stories wrong on the Amazon fires

The Amazon Is Burning, and the Entire Planet Is at Risk

Corporate Media Get the Story Wrong on the Amazon Fires 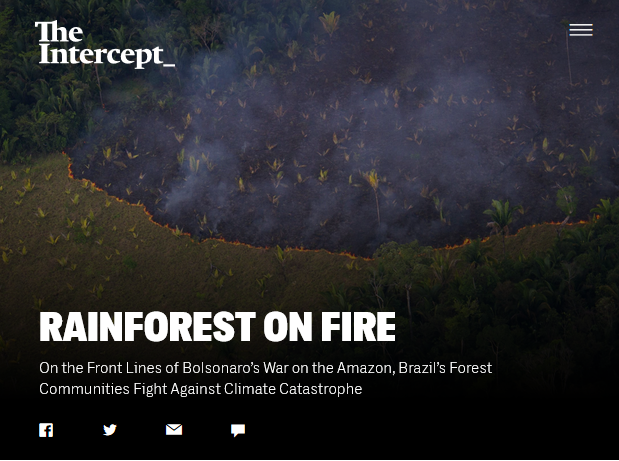 More and more media are reporting on fires tearing through the Amazon rainforest in Brazil. There has been a marked increase in fires in Brazil concurrent with an increase in illegal—and climate-disrupting—deforestation, concurrent with President Jair Bolsonaro’s efforts to open the Amazon to mining and logging interests. Criticism of media is coming in, too—mostly for being late to cover fires that have been burning for three weeks in a uniquely critical place. But whenever they do it, corporate media addressing modern day crises like the Amazon fires will never do them anything approaching justice.

The Amazon Is Burning, and the Entire Planet Is at Risk

‘The G-20 Is Death,’ and Other Lessons in Global Capitalism

Not as long as they refuse to sustainedly challenge anti-democratic powers like Bolsonaro: When the guy who jokes about being called Captain Chainsaw was emboldening illegal land-grabbing in indigenous and protected territories, the New York Times (10/26/18) was busy worrying if he would “deliver” on his promise to cut social security. (“Markets are optimistic,” we were told.)

More important, given that failure, is the refusal to hand the mic to those who are fighting. Like the Apurinã chief who told the Intercept‘s Alexander Zaitchik (7/6/19) they had seen landgrabs before, but “with Bolsonaro, the invasions are worse and will continue to get worse…. Unless he is stopped, he’ll run over our rights and allow a giant invasion of the forest.” Or the signatories to the Bogota Declaration to the 14th UN Biodiversity Conference, who offered a plan  from 400 ethnic groups across the Amazon basin to form a “sacred corridor of life,” to share ancestral knowledge and showcase alternative modes of development and ways of living (Common Dreams, 11/21/18).

It doesn’t matter so much how many reports corporate media write; if the same people stay at the center of them, the story won’t change.

“The idea that rich, temperate nations are economically immune to climate change, or could even double or triple their wealth as a result, just seems implausible”