Among the frontrunners in the Democratic Party presidential primary, Senators Warren and Sanders not only have the most progressive domestic agenda, but also the most anti-war, pro-diplomacy foreign policy agenda. 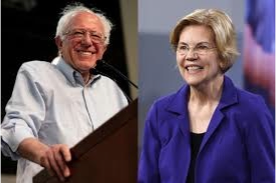 The sharpest distinction between them is that Sanders has voted against over 80% of recent record military spending bills in the Senate, while Warren has voted for two thirds of them.

But their pro-diplomacy worldview has blind spots. They have both tempered their calls for peace and diplomacy with attacks on Russia and China, framed as warnings against “authoritarianism.” These attacks—in the present-day context of bipartisan Russia- and China-bashing—carve out an ominous exception to their foreign policy agenda big enough to fly a squadron of F-35s through. This creates a pretext for continuing U.S. militarism and risks undermining their commitment to peace.

Warren defined her vision of U.S. foreign policy with an article in the January/February 2019 edition of Foreign Affairs.  She began, “Around the world, democracy is under assault. Authoritarian governments are gaining power, and right-wing demagogues are gaining strength.”  She asked, “How did we get here?”, and answered her question with an accurate and intelligent account of the failures of neoliberalism.

Warren explained that, after the Cold War, U.S. policymakers “began to export a particular brand of capitalism, one that involved weak regulations, low taxes on the wealthy, and policies favoring multinational corporations. And the United States took on a series of seemingly endless wars, engaging in conflicts with mistaken or uncertain objectives and no obvious path to completion. The impact of these policy changes has been devastating.”

Warren made a coherent critique of the U.S.’s militarized approach to terrorism, and promised to cut military spending and bring troops home from Afghanistan and Iraq. She champions a No First Use nuclear weapons policy, which would be a long overdue step toward ending the threat of nuclear annihilation that still hangs over us all.

But Warren also launched a fierce attack on Russia and China, lumping them together with Hungary, Turkey, the Philippines and Brazil under the umbrella of “authoritarianism.”

“This marriage of authoritarianism and corrupt capitalism,” Warren declared, “…allows authoritarian leaders to foment a global crisis of confidence in democracy.”  And yet, by her own analysis, it is neoliberal “center-left” and “center-right” governments that have sold out their voters to plutocratic corporate interests and caused this public loss of faith in mainstream politicians and parties. The rise of extreme right-wing leaders like Trump, Bolsonaro and Duterte is the result of this “global crisis of confidence in democracy,” not the cause of it.

Senator Sanders gave a major foreign policy speech in 2017 at Westminster College in Missouri, from the same stage where Churchill made his “iron curtain” speech in 1946. Sanders’ speech laid out a bold, progressive foreign policy agenda, filling in what many people felt was a missing piece in his 2016 campaign.

Sanders quoted President Eisenhower’s farewell speech on the Military-Industrial Complex and his 1953 speech after Stalin’s death, in which Eisenhower called military spending “a theft from those who hunger and are not fed, those who are cold and are not clothed.”

Eisenhower backed up that rhetoric by slashing U.S. military spending by 39% in his first two years in office, and then holding it at about that level for the remainder of his presidency, even under the extreme pressures of the Cold War.

Sanders argued that the U.S. post-Cold War goal of “benevolent global hegemony” had been “utterly discredited,” particularly “by the disastrous Iraq War and the instability and destruction it has brought to the region.”  Instead, he went on, “Our goal should be global engagement based on partnership, rather than dominance.”

Sanders went on to talk about how U.S. military and covert interventions in other countries “have caused incalculable harm,” mentioning U.S. roles in the 1953 coup in Iran, the Vietnam War, the 1973 coup in Chile, civil wars in El Salvador and Guatemala, the U.S. war in Iraq, and the Saudi-led war in Yemen.

Sanders contrasted the harm these interventions have done with the success of the post-WWII Marshall Plan, an example of the good that can come from using U.S. power and resources to rebuild war-torn countries instead of using U.S. weapons and covert operations to destroy them.

Connecting his foreign policy with a familiar theme from his domestic agenda, Sanders pointed out that, “The planet will not be secure or peaceful when so few have so much, and so many have so little.” And he looked forward to a day when “human beings on this planet will live in a world where international conflicts will be resolved peacefully, not by mass murder.”

Authoritarianism: From Syngman Rhee and the Shah to Trump and MBS

But, like Warren, Sanders made several references to “authoritarianism,” in particular in relation to Russia, and he has repeated that theme in more recent speeches.

When Sanders catalogued the history of disastrous U.S. interventions in other countries, he neglected to point out that his examples nearly all involved U.S. support for the most extreme, authoritarian right-wing governments of their day.

In fact, throughout the Cold War, the U.S. consistently supported conservative, right-wing parties and politicians in Asia, Africa and Latin America, bringing dictators and mass murderers to power in many countries. The examples range from Syngman Rhee in South Korea and Suharto in Indonesia to apartheid South Africa and Mbuto in the Congo to military dictatorships throughout Latin America and the Caribbean.

Current U.S. alliances with Saudi Arabia and the other absolute monarchies in the Persian Gulf, as well as Sisi’s Egypt and Netanyahu’s Israel, make it clear that the U.S. still does not choose its friends and allies based on their freedom from authoritarianism.

Nor can we even claim that the U.S. is free of authoritarian tendencies, including fear-mongering by Donald Trump, “the best Congress money can buy,” the rise of white nationalism, and two million Americans— disproportionately people of color—condemned to harsh prison terms and dehumanizing conditions in an American gulag.

The presidential candidates should also recognize that U.S. efforts to impose its political will on other countries through economic sanctions or by the threat or use of force are themselves a dangerous form of authoritarianism, and flagrant violations of the rules-based international order that the U.S. claims to uphold.

So if we are honest about it, Russia and China have not earned the hostility of U.S. policymakers because of their authoritarianism, but because they are large, powerful countries that have resisted U.S. ambitions for “global hegemony,” as Sanders described it.

As a critic of those ambitions himself, Sanders should appreciate Russia and China’s difficult position and the fine line they have had to walk to defend their sovereignty and develop economically without falling foul of this domineering, destructive U.S. militarism.

A New War to Rescue the Military-Industrial Complex?

After a 45-year Cold War against communism and a 20-year Global War on Terror, the last thing we need from our next president is a New Cold War, a “War on Authoritarianism” or a war of any kind as a new organizing principle for U.S. foreign policy.  Authoritarianism is not a concept the U.S. can defeat militarily, any more than “communism” or “terror.”

To the extent that authoritarianism is an international problem, the solution for it lies in progressive movements and in real policy solutions that will reverse the inequities of neoliberalism and improve the lives of working people here and around the world.

Senators Sanders and Warren have correctly diagnosed many of the problems of our society and helped to craft serious policy proposals to address them, from Medicare For All to the Green New Deal. We hope that these programs will be shining examples of democracy at work that other countries will want to emulate. But presidential candidates should not talk about exporting an American democratic revolution to other countries when we have barely begun the serious work of reforming our own country.

As Representative Gabbard keeps reiterating in her campaign, we must not let this moment and this chance for peace slip away into a New Cold War.

Sanders and Warren may not intend their criticisms of Russia and China to justify record Pentagon spending, but the Military-Industrial Complex is seizing on the Russia- and China-bashing by both Democrats and Republicans for precisely that purpose. After decades of fighting losing battles with guerrilla forces in Afghanistan and the Middle East, the US military is now once again preparing to combat “peer competitors,” i.e. Russia and China.

Rolling out its massive FY2020 budget proposal of $750 billion, the Pentagon noted, “With the largest research and development request in 70 years, this strategy-driven budget makes necessary investments in next-generation technology….The operations and capabilities supported by this budget will strongly position the US military for great power competition for decades to come.”

Democratic candidates should beware lest their tangled rhetoric about “authoritarianism” and their attacks on Russia and China are seized upon by military-industrial interests and braided into a lifeline to rescue the Military-Industrial Complex from its real mortal enemies: peace and disarmament.

In 2002, Senator Edward Kennedy called the Bush administration’s policy of “preemptive” war, “a call for 21st century American imperialism that no other nation can or should accept.” After two decades of intractable violence and chaos and a debilitating, ever-growing military budget, aspiring U.S. leaders should not be blaming other countries for the failures of U.S. policy or whipping up a new Cold War with old enemies.

Progressive candidates should instead be sending the entire world an unequivocal message that the United States is finally ready to turn the page to a new era of peaceful, cooperative and lawful diplomacy.  Until they do, and until they back it up in practice, it is premature to assume that Russia and China are committed to irredeemable hostility and a new arms race.

Without such a genuine commitment to peace and disarmament, the next president will find him- or herself caught in the same bind as Obama and Trump, squandering our country’s scarce resources on record military spending and stoking a New Cold War and arms race with Russia and China that neither the people of those nations nor the American public want.

Medea Benjamin, co-founder of CODEPINK for Peace, is the author of “Inside Iran: The Real History and Politics of the Islamic Republic of Iran” and  “Kingdom of the Unjust: Behind the U.S.-Saudi Connection.” Nicolas J. S. Davies is a researcher for CODEPINK and the author of “Blood on Our Hands: The American Invasion and Destruction of Iraq.”

Donate
By Rise Up TimesPublished On: August 28th, 2019Comments Off on Are Sanders and Warren Throwing a Lifeline to the Military-Industrial Complex?  by Medea Benjamin and Nicolas J. S. Davies