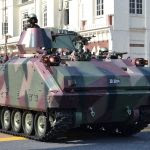 Estimated U.S. military spending is $989 billion. It covers the period October 1, 2019, through September 30, 2020. Military spending is the second largest item in the federal budget after Social Security. The United States spends more on defense than the next nine countries combined.

This estimate is more than the $750 billion announced by President Donald Trump. The United States has many departments that support its defense. All these departments must be included to get an accurate picture of how much America spends on its military operations.

If you really want to get a handle on what the United States spends on defense, you need to look at four components.

First is the $576 billion base budget for the Department of Defense. Second is $174 billion in overseas contingency operations for DoD to fight the Islamic State group. These two combined total the $740 billion touted by the president.

The last component is $26.1 billion in OCO funds for the State Department and Homeland Security.

Congress must pass a spending bill for defense and the other departments by September 30, 2019, to avoid a government shutdown.

The defense base budget of $576 billion funds the National Security Strategy and National Defense Strategy. It creates three new initiatives: the U.S. Space Force, the U.S. Space Command, and the Space Development Agency. DoD will spend $9.6 billion on cyberstrategy and expansion of artificial intelligence. It will build a new missile field in Alaska to defend against ballistic missile threats. Employees will receive a 3.1% pay increase.

Congress also provided funds to safeguard bases from climate change. It required facilities in the 100-year floodplain to design for two more feet of flooding. It wants DoD to investigate China’s activities in the Arctic. To that end, it authorized icebreakers.

Ironically, the DoD base budget does not include the cost of wars. That falls under Overseas Contingency Operations. It’s budgeted at $174 billion for DoD and $26.1 billion for other departments Since 2001, the OCO budget has spent $2 trillion to pay for the War on Terror.

Here’s a summary of military spending in billions of dollars since 2003:

Subscribe to RiseUpTimes.org    Support independent media. Donate now — just click here to donate through PayPal. (You do not need to be a Pay Pal member.)

Three Ways DoD Tries To Save Money, But Congress Won’t Let It

The Defense Department knows it needs to become more efficient. It now spends a third of its budget on personnel and maintenance. That will rise to 100% by 2024, thanks to retirement and medical costs. That leaves no funds for procurement, research, and development, construction or housing. These necessary support programs now take up more than a third of DoD’s budget.

Second, it must reduce pay and benefits costs for each soldier. Instead, it plans to raise both.

Third, and most important, it should close unneeded military bases. By its own estimates, the DoD is operating with 21% excess capacity in all its facilities.

Congress won’t allow DoD to close bases. The Bi-Partisan Budget Act of 2013 blocked future military base closings. Few elected officials are willing to risk losing local jobs caused by base closures in their states. Instead, the Pentagon will need to reduce the number of soldiers so it can afford the benefits of bases.

Congress is also reluctant to allow DoD to cut other costs, like military health benefits and the growth of military pay. Sequestration cut defense spending by $487 billion over 10 years. Many in Congress said the cuts jeopardize national security. They are concerned about a cutback of about 100,000 troops, closure of domestic military bases, and termination of some weapons systems. All of those cuts cost jobs and revenue in their districts. That’s why lawmakers added $180 billion to the limits imposed by sequestration for FY 2018 and FY 2019

At the same time, U.S. military spending is greater than those of the next 10 largest government expenditures combined. It’s four times more than China’s military budget of $228 billion. It’s almost 10 times bigger than Russia’s budget of just $69.4 billion.

U.S. militarism allows other allies to cut back on their own defense spending. It also raises the U.S. budget deficit and the $22 trillion debt. There is no realistic way to reduce either without cutting defense spending.

Excerpt: Why Military Spending Is More Than You Think It Is

Donate
By Rise Up TimesPublished On: August 14th, 2019Comments Off on U.S. Military Budget, Its Components, Challenges, and Growth, by Kimberly Amadeo