I picked up my phone and dialed the number and connected with her father. He had no idea where she was being held.” Long says there are many children being held by CBP who have parents and other family members who are legally in the United States. 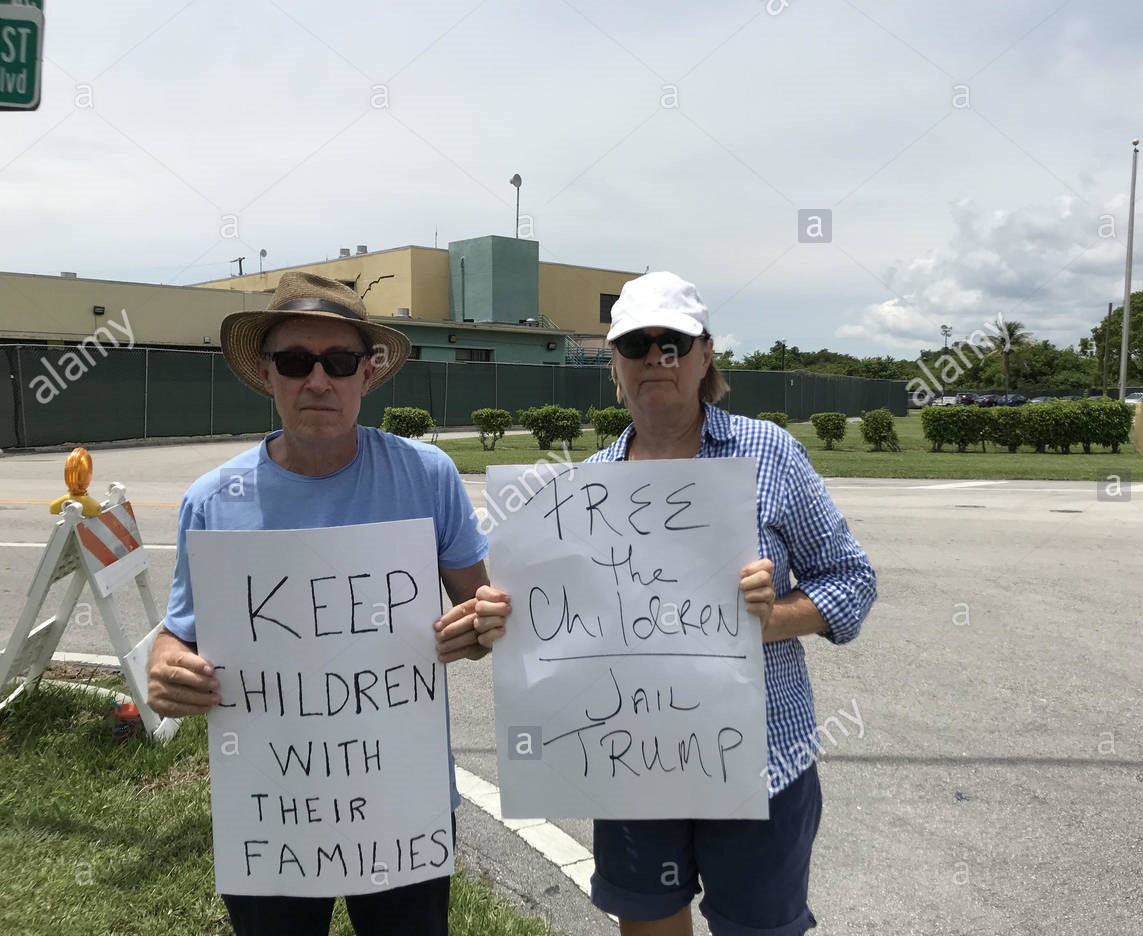 Two people demand not to separate children from their families outside a home for immigrant children in Homestead, Florida, United states, June 19, 2018.
Photo: Alamy.

What do you see when you look into the eyes of a child? Until Monday, over 350 migrant children were jailed in filthy, unsafe conditions by U.S. Customs and Border Protection in Clint, Texas. The few outsiders who were able to see these migrant children were universally appalled. Facing national outrage, CBP moved the children out, only to return 100 of the young prisoners the very next day. One who seems content jailing children is acting Immigration and Customs Enforcement Director Mark Morgan, who President Donald Trump has just made their chief jailer by naming him acting head of Customs and Border Protection. “I’ve walked up to these individuals that are so-called minors, 17 or under, and I’ve looked at them,” Morgan told Fox News prime-time host Tucker Carlson last January. “I’ve looked at their eyes and I said, ‘That is a soon-to-be MS-13 gang member.’”

Very few people have access to these children, so getting accurate information about their welfare is hard. Warren Binford, a law professor at Willamette University, was part of a legal team that exposed the conditions in Clint. She described what she saw on the Democracy Now! news hour:

They managed to interview 60 of the children. She went on: “They were sick. They were coughing. They had runny noses. They were filthy dirty. They immediately started to describe the level of hunger that they were experiencing.” Their horror deepened with each interview. “We found out that virtually no one is taking care of these children directly, that they are locked up in these cells 24 hours a day. There are open toilets in many of these cells. There’s no soap, no way to wash their hands. They’re being fed in these cells … many of them are being forced to sleep on concrete because of a shortage of beds and mats and sleeping space.” Guards handed toddlers to older children and told them to take care of them.

“After the second day of interviewing these children, we had a high-level, very urgent meeting,” Binford said. They made the unusual decision to contact the media, because, they concluded, “somebody is going to die.” 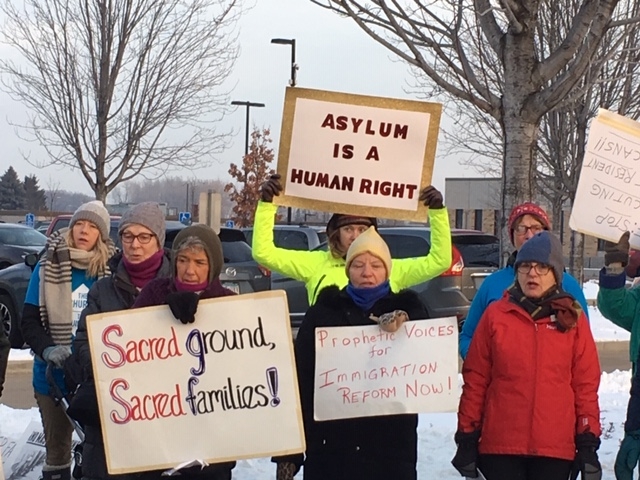 Clara Long, a researcher with Human Rights Watch, was also on the team. She told Democracy Now! about a quiet girl around the age of 7 or 8: “I said, ‘Who did you cross the border with?’ And she said, ‘My aunt.’ And then she just started crying so hard that she couldn’t produce words. I’m trying to calm her down, rubbing her back … she had a bracelet on with the words, in permanent marker, ‘U.S. parent’ and a phone number.”

Long continued: “There’s this sense that you’re not allowed to use your phone in the facilities, but at that point I and other members of our team just decided, ‘Screw that. We’re going to start making phone calls.’ I picked up my phone and dialed the number and connected with her father. He had no idea where she was being held.” Long says there are many children being held by CBP who have parents and other family members who are legally in the United States.

The plight of migrants and asylum-seekers was underscored when the Mexican newspaper La Jornada published a photo of a Salvadoran father and daughter drowned in the Rio Grande, her little arm still around his neck. Oscar Alberto Martinez Ramirez, 25, and his 23-month-old daughter Valeria were swept away by the rushing waters between Matamoros, Mexico, and Brownsville, Texas, after being turned back at the border when seeking legal asylum.

Responding to a question about the photo, Trump predictably blamed the Democrats for his border catastrophe. The immigrant detention system did grow dramatically under the Obama administration, but Trump expanded it much further, with an unheard-of level of cruelty. At least six children have died while detained by Trump’s Department of Homeland Security. Before last year, it had been more than a decade since a child died in the custody of U.S. immigration officials.

This week marks the first two Democratic presidential debates. Less than an hour away from their Miami venue, in Homestead, Florida, more than 2,000 unaccompanied minors are incarcerated in a for-profit detention center run by Caliburn. Trump’s former chief of staff Gen. John Kelly sits on its board. Debating the fate of jailed migrant children is important, but the life-and-death crisis that they have been thrown into demands immediate action. Abolish all migrant child jails now.

The original content of this program is licensed under a Creative Commons Attribution-Noncommercial-No Derivative Works 3.0 United States License. Please attribute legal copies of this work to democracynow.org. Some of the work(s) that this program incorporates, however, may be separately licensed. For further information or additional permissions, contact us.

Photos added by Rise Up Times.

“They were sick. They were coughing. They had runny noses. They were filthy dirty. They immediately started to describe the level of hunger that they were experiencing.”

Donate
By Rise Up TimesPublished On: June 30th, 2019Comments Off on Abolish Migrant Child Jails Now, by Amy Goodman and Dennis Moynihan